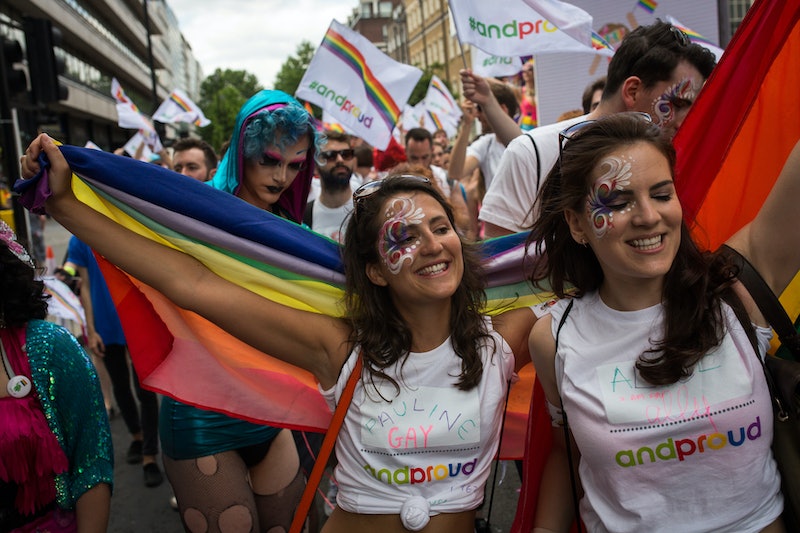 My book Stonewall came out in May, one of the first nonfiction books for teens to cover gay rights history. Although the focus of the book isn’t gay marriage, I introduce readers not just to the context and history of the Stonewall riots of 1969, but also to the roller coaster of battles that have been waged since, right up through the fight for marriage equality.

At the time the book went to press last fall, I had to leave off the history in the midst of current events. Explaining the Supreme Court’s latest impact on the subject, I wrote: “Within days, same-sex marriage became legal in a majority of the United States.” But the history ended there.

My editor and I knew that we had to be careful not to assume that current events would continue on the same positive trajectory. There had been earlier times when the quest for LGBTQ equality seemed unstoppable, only to founder and be derailed. In the end, we agreed that all I could add was this teaser: “If or when this momentum leads to nationwide marriage equality will be determined by the pacing and pathways of future events.”

Now we know how the history ends. I’ve never been happier for revisions to be in order for text in one of my books.

Writing Stonewall was a very personal experience for me. Although I am not a member of the LGBTQ community, some of my closest friends are, including the man to whom I dedicated my book. Thoughts of Mike, who came of age during the Stonewall era, kept me company as I worked. But there were two others on my mind, as well: a college friend who died from AIDS, and, perhaps most importantly, Tyler Clementi.

Tyler’s death, in the fall of 2010 was my tipping point for writing this book. Ever since 2003 I’d been thinking about the Stonewall riots as a social justice title for teens, but back then the likelihood of finding a publisher for the project had seemed as out of reach as gay marriage, and the book remained only an idea.

My job of writing for young people about social justice is my passion and a privilege. But living through history is even better.

But then Tyler Clementi jumped to his death from the George Washington Bridge, reacting to an extreme example of cyber bullying. That same fall I had two sons in college, and the death of someone close to their ages ignited all my parental instincts. And, as someone who has spent two decades writing books that can make a difference to young people, writing seemed like the best way for me to honor this young man’s life.

“No more Tylers,” became my motivational mantra, and I undertook Stonewall in his memory, as well as in memory of the friend I’d lost to AIDS. With the encouragement of Mike and others, I persevered in my work. Barack Obama unwittingly helped me secure a publishing commitment for the book with his Second Inaugural reference to “Seneca Falls, and Selma, and Stonewall.” Viking agreed with me that the time for this history had come, and my project gained an additional team of allies. Together we introduced Stonewall in May, then waited to see how our history would change.

In a coincidence worthy of a Hollywood script, my friend Mike to whom I dedicated my book was the one who alerted me to Friday’s news. “Hurray!” he shouted the subject line of his email. “Supreme Court has ruled gay marriage legal in all states!”

On reading his words, I was flooded with an immense sense of satisfaction. Such a wrong had been righted that it was as if there was a slightly more perfect spin to the planet. Despite my job as a writer, I wrote in my reply, “This one is beyond words for me.” And it was.

There is so much more celebrating to do, and, of course, the fight for equality will go on. And with both of these, there are plenty of stories left to tell. My job of writing for young people about social justice is my passion and a privilege. But living through history is even better.

More like this
The 20 Best Audiobooks To Fall Asleep To
By Aoife Hanna and K.W. Colyard
30 Books To Read This AAPI Heritage Month
By K.W. Colyard
'Heartstopper’s Joe Locke Has A Sweet Message For Queer Fans
By Sam Ramsden
Jake Daniels Just Became The UK’s First Active Football Player To Come Out As Gay Since 1990
By Sam Ramsden
Get Even More From Bustle — Sign Up For The Newsletter