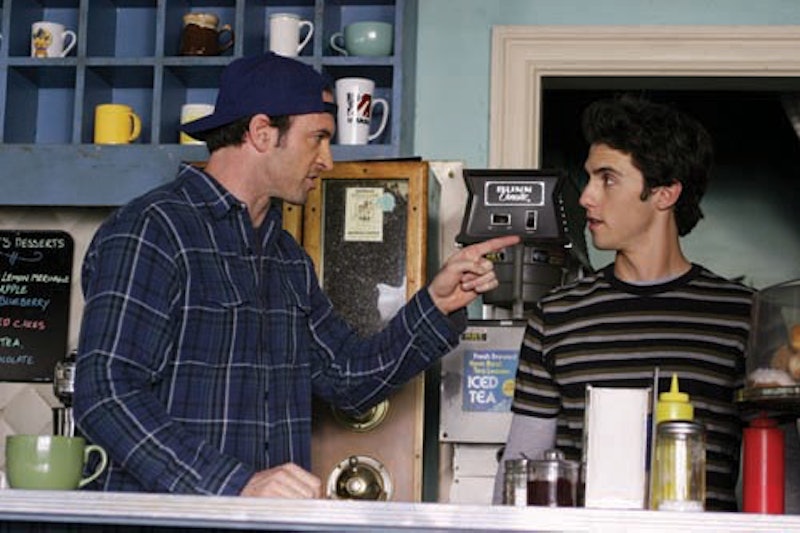 It's easy to automatically assume that Lorelai and Rory were the greatest Gilmore Girls relationship on the series. Possibly even in the entire world. And, while they certainly share an admirable — even enviable — mother-daughter bond, there's one relationship within Stars Hollow that could easily be overlooked, but deserves just as much (if not more) praise. I'm, of course, referring to Gilmore Girls ' very own Luke and Jess dynamic, which is hands down one of the greatest bromances of all time. They may appear to be tough and cranky on the outside, but on the inside these two Star Hollow relatives have hearts of gold and would do basically anything for each other.

Perhaps it was because their heartfelt moments happened less consistently than Lorelai and Rory's did, but whenever these two got together I couldn't help but feel all the feels for their unshakeable bond. Sure, they went through one or two (or ten) rough patches along the way, but when push came to shove, Luke and Jess stood by each other when they needed it most. I think that more than deserves some recognition. So, without further ado, here are all the moments that Luke and Jess were the true dynamic duo on Gilmore Girls.

1. When Jess Thanked Luke For Everything He's Done

Jess may have been all sorts of swoon-worthy, but he was also a pain to parent. However, Luke never stopped trying. Jess came to realize this and made sure Luke knew how much his constant support meant to him. It's IMPOSSIBLE to watch that scene and not get emotional.

Sure, this was a relatively small act of kindness, even the tiniest of gestures can go a long way. For Luke, saving that toaster meant a great deal since we all know he's not exactly a big fan of change. So Jess saved him not only time, but aggravation as well. And, that's something you just can't put a price on.

3. When Luke Pushed Jess Into The Water

In what has to be the world's best comeback in a fight, Luke shoved Jess into the water when young Mr. Mariano continued to give his uncle attitude. Luke won't be winning any parenting medals for this somewhat rash behavior, but you have to admire his technique... and, the fact that it was just downright hilarious. Wet or dry, these two have such great chemistry.

4. When Luke & Jess Took On A Vicious Swan

As ridiculous as Luke thought the whole swan attack story was, that didn't stop him from going out onto the water to defend Jess' honor. He was even going to let him use the baster. Now, that's love. Not to mention that it led to a pretty great heart-to-heart about relationships.

5. When Jess Was Luke's Wingman

Or at least he would have been if Luke had let him. The moment was sweet regardless though, and it proved that deep down Jess wanted to see his uncle happy.

Can you say "adorable"? Seriously, this is almost too much for me and further emphasizes just how fundamental these two were to the show. May all of us be so lucky to find our flannel twin.

And may all of us be lucky enough to find the Luke to our Jess.