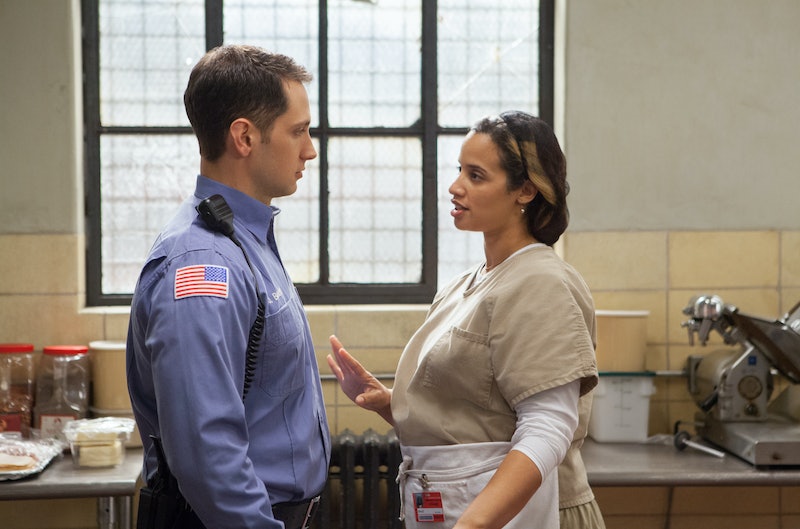 There are so many fun pairings on Orange Is The New Black , it almost seems unfair to attempt to dub just one of them the show's OTP. That said, I'm going to do it, because I love being controversial and stirring the pot and all that good stuff. While there are plenty of people out there who are in the Alex & Piper camp, I am firmly out of it, and I am of the very strong opinion that Daya and Officer Bennett are the OTP on OITNB. Before we move forward, let me just throw out the world's biggest spoiler alert, because there will be so many spoilers and I don't want to ruin anything for you if you're even a little bit behind.

OK, did I adequately scare all of the spoiler-wary people off? Good. Now, I know what many of you are going to say at my OTP declaration: "But, Sara, Bennett straight-up abandoned a very pregnant Daya after he promised to be there for her. How could you possibly think they're the show's best couple? For all intents and purposes, they're not even a couple anymore!"

To all of you I say this: I'm a firm believer in the "love conquers all" trope, and while I'm extremely disappointed in Bennett's unceremonious exit from Daya's life, I do think he'll come back, and I do think everything will eventually get settled. Maybe once he learns of what happened to Cesar and Daya's daughter and siblings (read: when Matt McGorry's done filming Season 2 of How to Get Away with Murder ), he'll come back! I mean, these nine Daya/Bennett moments were just so precious, how could he not come back and add even more to this least?

1. When He Couldn't Give Her Gum

This wasn't too long after Daya first arrived at Litchfield, and it was the first moment that made us realize the potential of their cuteness.

2. When She Wasn't Afraid To Call Out Their Screwed-Up Power Dynamic

Even their fights were cute.

3. When They Pretended To Be A "Normal" Couple For Valentine's Day

This was my favorite episode ever, and I suggest you all go back and watch it right now because it was perfect.

4. When She Tried His Chewing Tobacco Because That's How Flirting Works

And then he helped her get it out of her teeth when she realized that it was just plain gross, and no other dental situation was ever more sexually charged.

5. When He Helped Her Get Untangled

AND IT WAS LITERALLY THE MOST PRECIOUS INTERACTION THAT TWO HUMANS COULD HAVE.

6. When She Left Bennett His First Drawing

I'm actually kind of sad that Daya's drawings weren't as big of a thing in Season 3. It was one of my favorite things about her character early on, and I thought it was a really sweet way for her to show Bennett who she was outside of her prison persona.

And not just because it was in the snow and adorable and all that, but you could really see that something real was developing.

8. When She Didn't Judge His Fake Leg Even Though He Was Self-Conscious

Guys, this was a perfect example of accepting the person you love for who they are, even when they don't necessarily accept themselves.

9. When He Proposed To Her With A Tin Foil Ring

More like this
Natalia Dyer Just Revealed The Weirdest Thing About Her Charlie Heaton Romance
By Nola Ojomu
What’s New On Netflix: 'Stranger Things' & 'Somebody Feed Phil' Return
By Arya Roshanian
Oops! The 'Stranger Things' Monopoly Game Has Spoilers For Season 4
By Alyssa Lapid
17 Hilarious British Comedies On Netflix
By Sophie McEvoy and Sabah Hussain
Get Even More From Bustle — Sign Up For The Newsletter