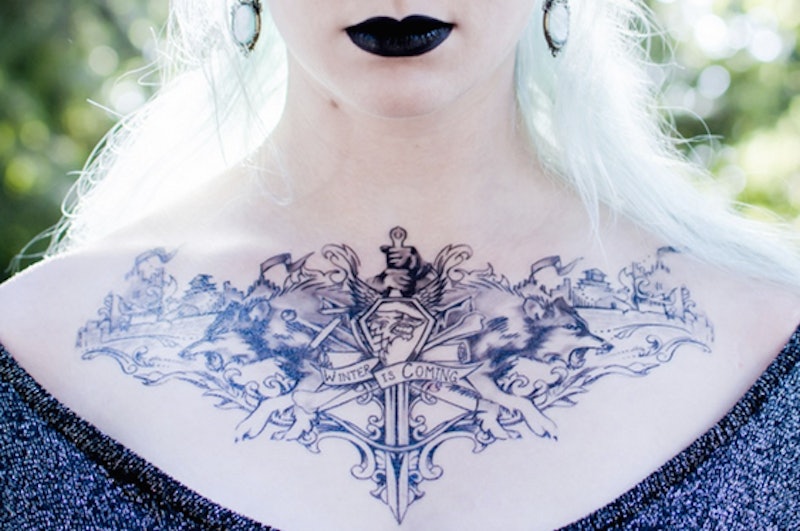 For those who are not up to date with Game of Thrones, I advise you to look away immediately as there are many plot spoilers afoot! For those still here, today I shall be commemorating the late Jon Snow with a selection of wolf inspired fashion pieces. That is, if he really is dead. There are tons of theories out there, imagined by desperate fans (like myself) who yearn for nothing more in GoT than for Jon to still be alive; or if he has died, to come back to life.

Actually, my biggest GoT wish would be for Daenerys to fly to Winterfell on Drogon, rescue Sansa, and unleash havoc across Westeros, with Missandei riding Viserion and Sansa astride Rhaegal. They would make the ultimate rebel girl gang. Meanwhile, Jon would be resurrected by Melisandre, he would take King's Landing with the North behind him, and finally he would marry Daenerys. That's the dream. Although it would soon turn into a nightmare if Jon did in fact turn out to be a Targaryen, in which case, he would have married his sister. However, it is not uncommon for Targaryens to marry each other.

Sadly, as we all know too well, GoT is no Disney movie and I would be very lucky if just one of my fantasy plot lines came true, let alone the entire lot. So we must continue with the information we have to hand, which seems to be that Jon Snow is dead and gone for good.

Therefore, I wish to commemorate the most noble (and handsome) Lord Commander that the Night's Watch has ever had. I will still have my fingers firmly crossed that HBO has cried wolf with Jon Snow's death but for now, here is some wolf inspired fashion to pay our respects.

Show the world you are firmly siding with Team Stark in this awesome Winterfell inspired shooter. Who knows, maybe Jon will be resurrected and be made an official Stark in the sixth season?

These direwolf inspired earrings are too cute. Upon checkout, you can choose for the wolf to be carrying a knife in its mouth or not. I would choose the wolves with knives because I think the addition of the knives gives these studs a feel of Jon Snow's sword Longclaw, which has a white, direwolf head pommel.

Pay homage to Jon Snow's upbringing and the House of (whom we presume to be) his father, Eddard Stark, with this epic temporary tattoo.

Although this ring is technically modeled on a Siberian Husky dog, I think it bears a striking resemblance to Jon Snow's direwolf Ghost. Plus, it's a knowing nod for those who believe in the theory that Jon is a warg and his conscience entered Ghost just before he died.

Pay homage to all of the Stark children's direwolves, past and present, with this awesome tank top. Perfect for catching some summer rays, this tank is a must have piece for any Jon Snow fan.

Hop aboard the '90s choker trend with this eerie, wolf claw choker — a perfect piece for an aspiring goth girl. Just add your Dr. Martens boots and apply a coating of black lipstick and you'll be good to go!

If you want to pretend that you too are a warg, then you will need this Ghost style wolf hood in your life! For summer, wear to a festival with a playsuit or t–shirt and shorts to make sure you don't overheat. In winter, it will become your new favorite accessory and you will never want to take it off.

Not only does this tank top have a snarling wolf on the front but I think its logo really epitomizes Jon's character. Jon has been flung into many dangerous situations and has had to step up to lead the men of the Night's Watch even before he was given the position of Lord Commander. Thus, this "Born Ready" top has Jon Snow written all over it.

I Was A Teenage Direwolf T–Shirt, $13, etsy.com

This teenage direwolf shirt is what GoT pop culture reference dreams are made of. Making a comedic reference to the 1950s movie, I Was a Teenage Werewolf, it appears to feature Jon Snow's younger half brother Bran Stark. Although it could be applied to Jon if the warg theories are true. However, he was apparently 20 years old during the fifth season, so he would no longer have been a teen — but we can just skip over that slight detail because this t–shirt is amazing.

May you rest in peace Jon Snow. Or rise from death... Preferably the latter.

More like this
The Trailer For The 'Game Of Thrones' Prequel 'House Of The Dragon' Is Dark AF
By Grace Wehniainen
'Games of Thrones' Fans May Recognise This 'Conversations With Friends' Location
By El Hunt
M.A.C. Is Launching An ’80s-Chic Stranger Things Makeup Collection
By Olivia Rose Ferreiro
14 Spicy Bralette Outfits For Vaxed Girl Summer, Round 2
By Avery Matera
Get Even More From Bustle — Sign Up For The Newsletter