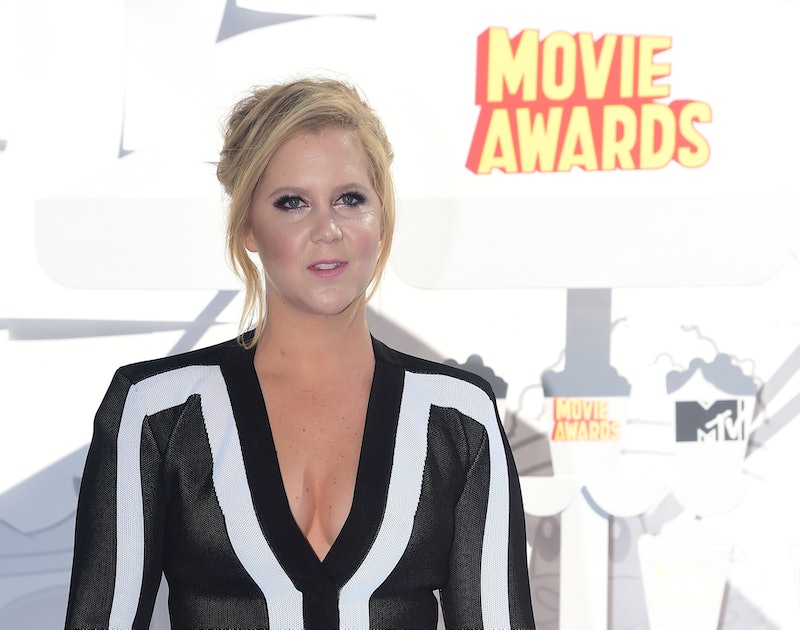 Amy Schumer has no problem telling it like it is. The comedian extraordinaire should totally consider being a hard truths life coach on the side because her words of wisdom can help you through career struggles, life struggles, and dating struggles. I'm going to be real here, Amy Schumer's honest, hilarious take on romance is one of my favorite things about her. She knows dating is crazy, fun, and a bizarre human ritual that pretty much everyone goes through. Over the years she has dropped some serious dating knowledge, both intentionally and unintentionally via her amazing quotes. Basically every word that comes out of her mouth is golden, but the quotes below are near and dear to my heart.

See, Schumer doesn't sugarcoat the dating experience. All it takes is one look at the trailer for her upcoming modern romantic comedy Trainwreck to know the 34-year-old is all about being sex positive, going after what you want, and being totally OK with not wanting to be in a relationship.

I've gathered together some of her greatest quotes — some explicitly about love, and some not so much — that make for totally flawless dating advice for anyone who wants to get out there and play the field. Remember, Schumer's advice is not about finding the one, it's about having fun and enjoying all the weirdness the dating world has to offer.

1. "I went home with this French guy because he said something adorable like, 'I have an apartment.'" — Amy Schumer: Mostly Sex Stuff

So often women are made to feel like they shouldn't go for a random hook-up, but you know what? It is more than OK, it can be awesome. If you hit it off with someone because their accent is sexy or they mentioned they make great waffles, and you are certain they're not a serial killer, then have that hook-up. You are a grown ass woman and you've got needs too.

2. "I am a hot-blooded fighter and I am fearless." — Gloria Awards and Gala Speech

Rejection sucks. It sucks hard, but it is part of dating. It does not have to define you, in fact, it probably has nothing to do with you. The next time rejection strikes, find your inner Amy and remind yourself that just because someone didn't call back doesn't make you any less awesome.

3. "I’m probably like 160 pounds right now, and I can catch a dick whenever I want. It’s not a problem!" — Glamour Awards Speech

Half of dating is self-confidence. Actually, the percentage is probably higher than that, but I am terrible at math. Basically, be confident. After that dating will be fun (and hilarious), but not something worth freaking out over.

4. "I'm wearing one ring and that's in my body right now." — Chelsea Lately

Forget Beyoncé, if you like it, you don't have to put a ring on it.

5. "The moments that make life worth living are when things are at their worst and you find a way to laugh." — Esquire

Every bad date is a future funny story you can tell your next date.

6. "There's a guy right now I've been texting with, and I really don't see myself having a bathing-suit wedding with him, but I'll probably have sex with him." — Cosmopolitan

There is a lot to be said for Mr. Right Now. Half of the fun of dating is meeting new people who you don't necessarily want to spend your whole life with, but who you can have fun with in the moment.

7. "I think it's stranger to me that people are shy about it. Because I know embarrassing sex stuff does happen! People aren't just like, 'Hi, I love you. We're gonna be together forever.' And then no weird noises happen." — Rolling Stone

Whether sex happens or not, dates can get awkward. Embrace the awkwardness. There's power in owning an uncomfortable situation.

8. "Sometimes I feel like, 'Oh my god, I haven't had sex in months and I'm not looking to and I just want to watch Downton Abbey in bed and make tea for myself.'" — Cosmopolitan

On the flipside, sometimes you want to breakup with dating, and that's cool too.

9. "I completely love sex and I don't feel shy about feeling entitled to an orgasm if I'm having sex with somebody." — Cosmopolitan

However, if you are out there in the dating world, go forth with confidence and don't be afraid to tell your partner what you want. You be you, you beautiful tropical fish.