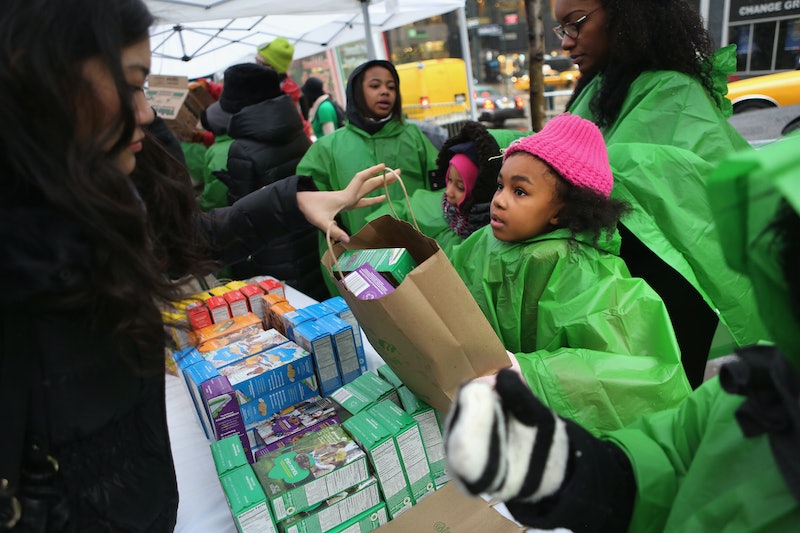 Girl Scouts of Western Washington Council CEO Megan Ferland was "thrilled" to receive a $100,000 donation to send 500 girls to camp, she recently told Seattle Met. But something else soon arrived in the mail that put a damper on her plans: A letter from the donor requesting that the money either not be used to support anyone transgender, or be returned. However, the Girl Scouts responded to the transphobic letter by choosing the latter option, adding to the growing list of instances of Girl Scouts being proud trans allies.

After all the commotion about Caitlyn Jenner's transition, the donor (whom Ferland has not named) wanted to ensure that the donation was not used to support transgender Girl Scouts, so they sent another letter reading: "Please guarantee that our gift will not be used to support transgender girls. If you can’t, please return the money." Though they hated to give up the money and the opportunities it would afford their troops, they followed the instructions to the letter — because, as Ferland told Seattle Met, “Girl Scouts is for every girl, and every girl should have the opportunity to be a Girl Scout if she wants to.”

The Girl Scouts of Western Washington launched an Indiegogo campaign to compensate for the money they refused with a video displaying the hashtag #ForEveryGirl. "Every girl deserves access to a safe, friendly environment," the text in the video reads. And so far? They've more than made up for the previous $100,000, raising a total of $102,178 already with 30 days left. It turns out rejecting transphobia was the right thing to do not just for the message it sends, but also for the resources it provided to girls who need them.

The Girl Scouts have a history of refusing to support transphobia. Here are three other incidents that prove this.

2. The Girl Scouts responded to the American Family Association's protests by reaffirming their support for "all girls."

Last month, several years after the Girl Scouts announced their policy of acceptance toward transgender youth, the American Family Association started a petition against "boys in skirts, boys in make-up and boys in tents," claiming that "this change will put young innocent girls at risk" (talk about choosing your battles). In response, Girl Scouts USA Chief Girl Expert Andrea Bastiani Archibald published a blog post explaining that "if a girl is recognized by her family, school and community as a girl and lives culturally as a girl, Girl Scouts is an organization that can serve her in a setting that is both emotionally and physically safe." However, the post also states that issues related to transgender Girl Scouts are handled at the local level, leaving a loophole that some places have exploited.

3. There's a more radical version of Girl Scouts, and they supported the trans community at the Trans March this year.

Oakland, CA is home to an amazing-sounding variation of the Girl Scouts called the Radical Monarchs, whose badges are for things like being an LGBT ally instead of camping or crafts. At this year's annual Trans March, the Radical Monarchs — who aren't a part of Girl Scouts USA, but which follow a similar scouting system — made a trip to San Francisco to solicit donations for the march and participate in it themselves.

More like this
25 Inspiring Quotes From Black Women To Celebrate Black History Month
By Kyli Rodriguez-Cayro and JR Thorpe
Gen Z Are Twice As Likely To Identify As Queer, According To New Data
By Sam Ramsden
24 History-Making Black Women You Probably Didn't Learn About In School
By Ayana Lage and JR Thorpe
15 Black-Owned Liquor & Wine Brands To Add To Your Bar Cart
By Alexis Morillo
Get Even More From Bustle — Sign Up For The Newsletter
From hair trends to relationship advice, our daily newsletter has everything you need to sound like a person who’s on TikTok, even if you aren’t.