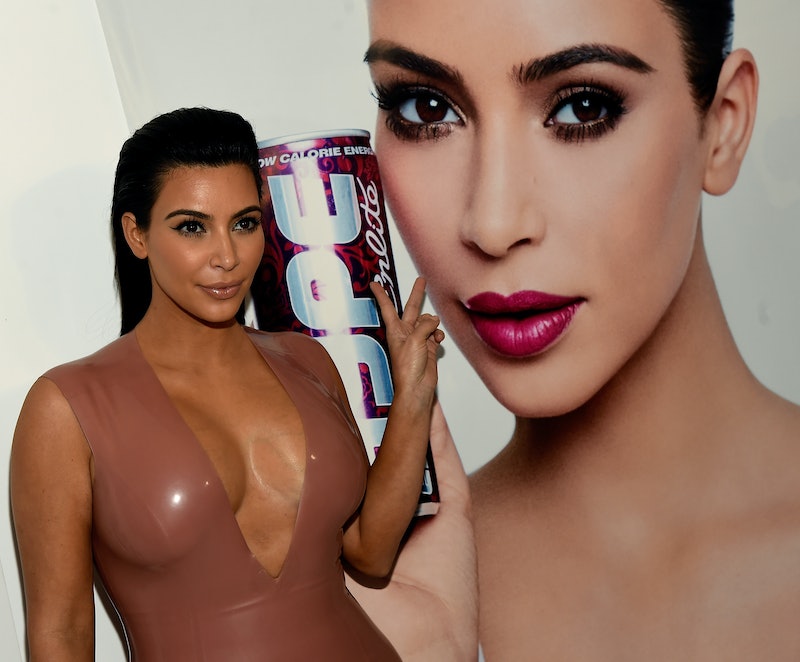 The mere fact that a Kardashian was set to speak at the prestigious Kommonwealth Klub of Kalifornia (I mean, the Commonwealth Club of California) caused a fair amount of backlash this week, so when Kim Kardashian admitted that she "feels good" about objectifying herself with selfies in her speech at that very event, I'm sure you can imagine the headlines that came after that golden nugget of information. But here's the thing (and don't shank me): I kind of agree with her.

According to the Associated Press, the Keeping Up With the Kardashians star was asked if she felt that she was objectifying herself with the countless number of selfies that she shares on social media — and she was quite candid (kandid? I promise I'll stop) in her response.

"Yes. I don't think it's a bad thing," she responded honestly. "I think there's power in that and I think I have the control to put out what I want so even if I'm objectifying myself, I feel good about it."

Before you put down the reality star's opinion as someone with poor self-esteem who feels like she can only feel empowered by her looks, I think her reasoning is a bit more complex than that. And yes, I am fully aware that she is now a New York Times best-selling author thanks to Selfish , her entire book of selfies.

Hear me out. First of all, there's her point that taking selfies means you're the one in control of the photo-taking situation, which, for a woman who is literally stalked by paparazzi day and night, must be pretty relieving in its own right. She can combat the unwanted images paparazzi snap of her with picture-perfect photos of her own. Does it make her look a little vain? Sure. But I could easily argue that every single person who has any kind of social media platform is narcissistic in some fashion. Everyone paints themselves in the most flattering light on the Internet, because your own brand is all in your control. Just like Kardashian argues.

Secondly, there is nothing wrong with feeling empowered by a good photo of yourself. To go back to the "control" idea, selfies afford you the opportunity to have total power over the entire composition of the picture, from the angle to the lighting to the background to whatever kind of duck face you're probably making. Yes, there are many ways in this world for women to feel empowered, but it's OK to feel good about sharing a confidence-boosting picture of yourself, just like how it's totally kickass that you just got a new promotion at work or just nailed that workout routine you've been attempting all month. It's all about self-confidence, and if you think you look hot in that latest selfie you just snapped, more power to you. Share away.

And then there's the whole concept of objectifying yourself via selfie. Isn't every selfie a form of objectification in some way? I mean, I'm pretty sure that the front-facing camera was invented for the sole purpose of being able to snap the most universally photogenic pics of yourself. Yeah, Kardashian openly admitted at the Commonwealth event that she "overshares" those trademark Kim Kardashian "bikini selfies" sometimes (I won't argue that point), but literally anyone who has ever posted a selfie in his or her life is ridin' that self-objectification train too.

At the end of the day, Kim Kardashian — entrepreneur/businesswoman/best-selling author/self-made celebrity — like every human, is made up of more than just her selfies. But that doesn't mean she can't enjoy them.