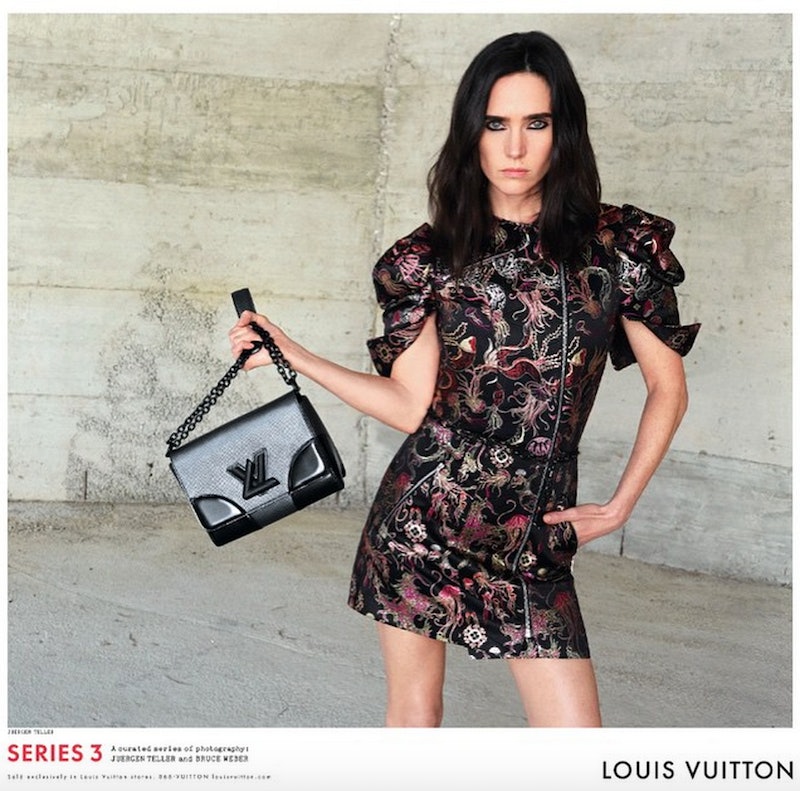 Louis Vuitton has been absolutely killing it lately — I mean, they hired Alicia Vikander as their new face (and she's been wearing their designs like nobody's business), their ads with Michelle Williams continue to be more glamorous than glamorous can be, and come on — they had an honest-to-god crane machine filled with LV wallets at their Palm Springs Resort 2016 show. I think we can all agree that they're winning at life. So basically, it should come as a surprise to no one that the Louis Vuitton Fall 2015/2016 ad campaign (which was shot by Juergen Teller and Bruce Weber) has completely knocked it out of the park.

The newest ads from the brand feature many of their frequent collaborators of late — Jennifer Connelly (who starred in their Spring 2015/2015 campaign), the aforementioned Alicia Vikander, Fernanda Ly (you might recognize her as the fabulously pink-haired model from their recent Paris runway show), and Rianne van Rompaey (another LV runway favorite). All four women cut quite intimidating figures as they modeled both apparel and accessories from the brand, using their distinctly different style DNAs to represent different facets of Louis Vuitton. Let's take a look!

Now that's how you do brocade — with dramatic eyeliner and even more dramatic sleeves.

If that lace and leather dress looks familiar, it's because Selena Gomez wore it to the LV Cruise show back in May. Quick — who wore it better? (Personally, my money's on Vikander here).

Much like she did on the Paris runway, Fernanda made us all covet the ultra-stylish (and unexpected) pink hair/white fur coat combo.

Rianne got quite possibly the moodiest look of all (along with the highest-impact purse of the bunch).

Altogether pretty darn fab, right? Many are pointing out that the ads are quite similar to LV's last few campaigns (this one is heralded as Series 3 for a reason, after all) — but hey: If it ain't broke, don't fix it.