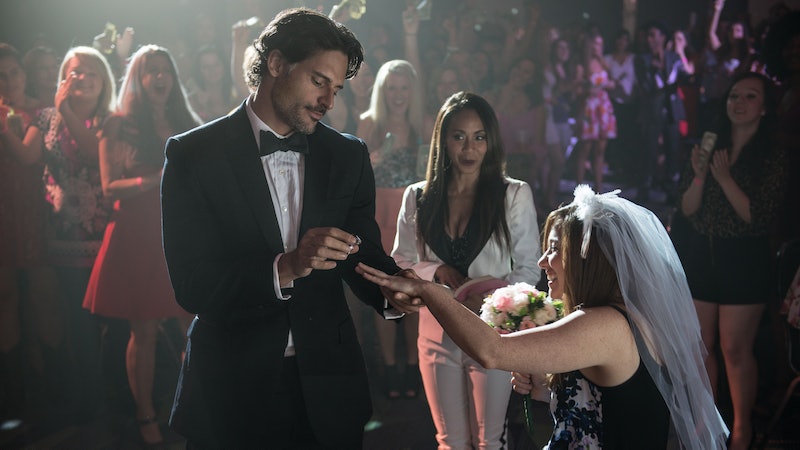 When a movie stars a predominantly male cast, is poised to be a huge blockbuster, and has a plot based around the concept of male bonding, it's easy to assume that women, whether supporting them or simply featuring them, would be the least of its priorities. Plenty of movies that've come out in recent years, from The Expendables to Transformers, have fit that description all too well. So when Magic Mike, a film mostly starring, and about men, came out back in 2012, expectations for its feminism were understandably low. Yet that movie surprised us all, making women a focus and targeting a primarily female audience. But what about its sequel, the stripper convention-set film out this month? Is Magic Mike XXL feminist?

The short answer? Hell, yes. Like its predecessor, Magic Mike XXL is aimed at female viewers, and for good reason; the first movie, according to The Washington Post, had women making up 73 percent of its audience. They're films about male stripping, and as such, shirtless men and sexy dance scenes make up substantial parts of both movies. Yet here's the difference: in the first Magic Mike, the movie was, at its core, about men. The plot revolved around the male characters' lives, and the few female characters in the film were given minor screen-time and much smaller story arcs. Yes, the movie was aimed at female audiences (and even passed the Bechdel test, albeit barely), but the film itself dealt far more with its male characters' desires and actions than those of its females.

That wasn't necessarily a bad thing, of course; Magic Mike was well-made and highly entertaining, and even without its female focus, it reminded studios all the same that women do buy movie tickets, and lots of them. Still, it'd be a stretch to call it feminist, due to its lack of female characters and male-centric themes. Magic Mike XXL, however, is an entirely different story. Like the first one, the film features a majorly male cast, and spends most of its time following their adventures. But unlike its predecessor, Magic Mike XXL is not just aimed at women — it's about them.

As stated several times throughout the sequel, male stripping is not for men, or at least, it shouldn't be; stripping is about women, those who have paid money, gathered friends, and left their husbands at home to experience a night of, as one person says in the movie, being "worshipped." Stripping, it's said, should be both a club-ready show and an intimate performance; it should entertain all the female fans — no matter race, ethnicity, or body size — in attendance, but also make each one of them feel like they're the dance's only subject. If a woman doesn't feel like she's being treated like a "queen," as Jada Pinkett Smith's character says, then the dancer has failed at his job, as stripping is all about satisfying the desires of the women eagerly watching it happen.

And no one in Magic Mike XXL emphasizes this more than Smith's Rome, the mysterious, alluring owner of Domina, an exotic dance club, that the group visits partway through the film. When we meet her, we immediately learn that Rome is an extremely powerful woman, and that the patrons of her club look to her as nothing less than a goddess. She believes wholeheartedly in the importance of stripping, viewing it far more as an art than a silly pastime; her dancers use their time on-stage to make women feel beautiful, idolized, and truly, deeply seen. She encourages it herself, calling all of Domina's guests "queens" and paying special attention to those who look especially lonely or lost. It's not out of pity, though — Rome truly believes that every woman at her club deserves to be treated like royalty, and that it's the job of the men entertaining them to ensure that they are.

A major theme of female respect and empowerment: that's already a major accomplishment for any movie, especially one that's technically about men. But Magic Mike XXL goes beyond that. It has its female characters, too, take front and center roles, and it makes them as interesting, if not more than, the men. There's Elizabeth Banks' Paris, a woman who, while only on-screen for a brief period of time, exudes intrigue and provides substantial entertainment. There's Nancy (Andie MacDowell), a middle-aged woman who gives the movie many of its laughs, but also expresses a desire for sexual satisfaction that the movie, and the others characters, take seriously. There's also Zoe (Amber Heard), a 20-something who catches the eye of Mike (Channing Tatum) by reminding him of his younger self in all the best and worst ways. In another movie, she could easily have been a manic pixie dream girl — a smart but flighty character who intrigues the male star but whose only purpose is to make him realize something important about himself. Yet here, she feels realized and essential, a character worthy of her own storyline, and who seems far more interested in her own pursuits than simply helping Mike find his way.

By far, though, the biggest female presence in the film is Pinkett Smith's Rome. Even with her life mostly a mystery, she still manages to be one of the most interesting people in the movie, thanks to sharp dialogue, a complex personality, and a clear understanding by viewers of her influence within the stripping industry. Within the stripping world, Rome matters more than Richie, Tito, even Mike; she's the person they go to for help, and she is in complete control of their fates. She's also a black woman, and her position of power is even more significant due to the fact that her race is simply a facet of her character, not the definition. She's a fascinating character, and a hugely important one.

Magic Mike XXL certainly isn't perfect in its feminism: there still are too few women in the cast, and unless I missed something, the movie doesn't pass the Bechdel test. Yet at its center, the movie does just as much for women as the more "traditionally" feminist films out this year, like Trainwreck and Pitch Perfect 2, in addition to providing a crucial dose of feminism to a summer season that's full of male-centric films like Ant-Man, Entourage, and Ted 2. It's an important movie to exist, and its message should be echoed in more films going forward: even in "male" movies, women can, and should, matter.