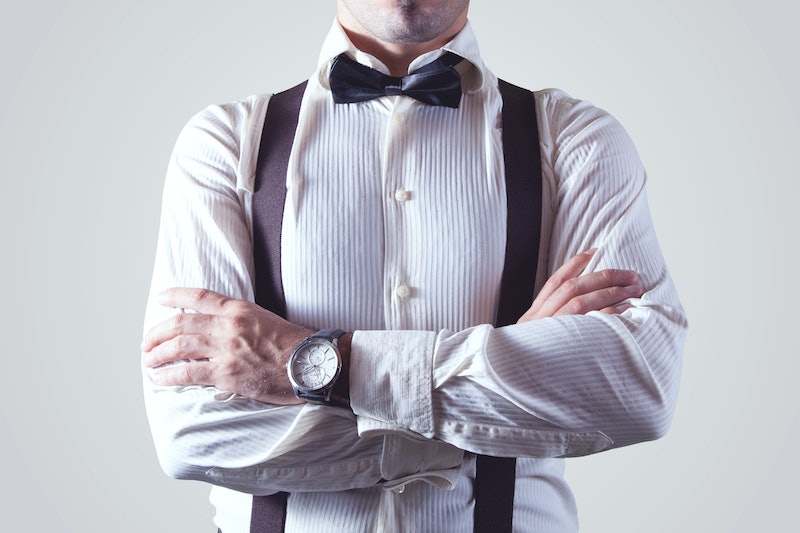 There's no greater hell than getting to know a guy who seems awesome in every way, only to find out that he may or may not think that women are somehow inferior to men. Sure, most humans with a functioning brain know this is complete and utter BS — a person's a person, and women are undoubtedly just as strong, smart, funny, brave, and every other adjective as men are. The archaic notion that men should dominate women has unfortunately created an uncomfortably patriarchal society in many ways, and this can often lead to men displaying some gross misogyny, whether implicitly or explicitly.

My most recent experience with this came while watching Keeping Up With The Kardashians, of all things. The guy in question and I had come home after a long day of drinking to find my roommates watching the iconic E! show, and before too long, he made some comment about "thinking that Kylie wears too much makeup." Naturally, my claws came out faster than you can say "woman-hater" and I immediately said, "Well it's a good thing that nobody gives a damn what you think. Kylie doesn't wear makeup for you." The alcohol might have made me a little vicious, but I don't regret it at all. Sure, this guy is Southern and maybe hasn't been exposed to feminism as much as most guys I'm used to, but that's no excuse for ignorance and I wanted to give him a feminist education ASAP if we were going to keep dating.

If you want to make sure that a guy you're interested in respects women as human beings and doesn't think of us as delicate, emotional little flowers, be on the lookout for these signs. Here are 9 things that might slip out of the mouth of an undercover misogynist — heed my warning, ladies.

Yes, my uterine lining sheds every month. No, that doesn't turn me into a literal vampire with her teeth bared ready to pounce on unsuspecting men at any moment. My menstrual cycle has nothing to do with you, and trying to boil down my moods, problems, or concerns to it being "my time of the month" is ignorant and hateful. Patting me on the head and giving me a tampon won't stop me from being pissed off that you're a misogynist, dude.

I would be completely lying if I said that I hate when guys offer to pay for me (hey, I'm a freelance writer living in NYC), and that doesn't make me a bad feminist. But when I offer to split the tab or pay the whole thing and the guy outwardly takes issue with it, that's a huge red flag. There's a difference between simply wanting to treat someone because you like them and genuinely feeling uncomfortable with a woman paying. Remember on Real World: Skeletons when Bruno literally freaked out at Carla for offering to pay for his haircut? Yeah, that's a classic case of misogyny. Avoid these guys at all costs if you want to be respected in other aspects of your relationship.

Utter those three little words and I will show you crazy. Women are too often dismissed as "crazy" for doing something strange called "exhibiting emotions." All men repeat after me: "I will never call a woman 'crazy' again. It is a bad thing to do and makes me seem ignorant. Amen."

4. "I just don't know if Hillary is really qualified to be president."

If you don't agree with Hillary's ideology, that's one thing. But it's a problem if a guy seems to take issue with Hillary simply because she's a lady. Her former title as First Lady doesn't make her any less qualified to be president, nor does the fact that she has a vagina instead of a penis. Hating on her because you think we "need a strong man to run the country" is, frankly, appalling. Please excuse me while I go and vomit.

And what exactly is this supposed to mean, anyways? A woman should never be shamed because she likes to dress up, wear a lot of makeup, or strut around in heels. I've noticed that catcalling increases tenfold for me if I happen to be wearing lipstick, which is a pretty strong indicator that a lot of men think that makeup is a flashing neon sign that says "I want you to notice me." Newsflash: Women wear makeup for all kinds of reasons, and "impressing men" is nowhere on that list. Every girl is "natural" and it makes you look stupid to proclaim that you're only attracted to women who don't wear makeup. Similarly, saying you prefer women who do wear a lot of makeup is also problematic. The bottom line: You don't get to have an opinion about how I choose to present myself to the world.

I don't need to do anything you tell me to do, least of all show you respect that you haven't earned. Oh, you were born with a penis between your legs? Congratulations, no one gives a f*ck. How about, as a general rule, we all respect each other, regardless of gender? Acting entitled to being worshipped by women is extremely off-putting, and only the douchiest of guys would think that his status as a man earns him some kind of higher level of "being respected." There's a difference between a genuine concern that your partner isn't respectful of your wants and needs and ordering someone to respect your demands. The latter suggests that you think you're superior or that your partner owes you something because you're a man and she's a woman. Not cool, guys.

In a similar vein, if a guy is intimidated by a woman in a position of power, that might be a sign that you should run away as fast as you can. There's a long-standing double standard about powerful women in the workplace, who are often called "bossy" or "bitchy" while male bosses are lauded for being "tough" or "firm." Sexism in the workplace is an issue for Millennials, too, and if a guy seems put-off because his boss is a woman, he clearly has some issues to work out.

9. "Women shouldn't be allowed to have abortions."

If a man doesn't respect a woman's right to choose what to do with her own body, then that's a serious issue. Sure, you yourself might be pro-life, but at the end of the day, it's your body and a man who is so quick to ascribe his ideals onto the bodies of women clearly doesn't understand that women's reproductive rights are just that — women's. Studies have found that sexists are more likely to be anti-abortion, so if a guy adamantly expresses his pro-life views to you, you might want to consider whether he really respects you as a human being.