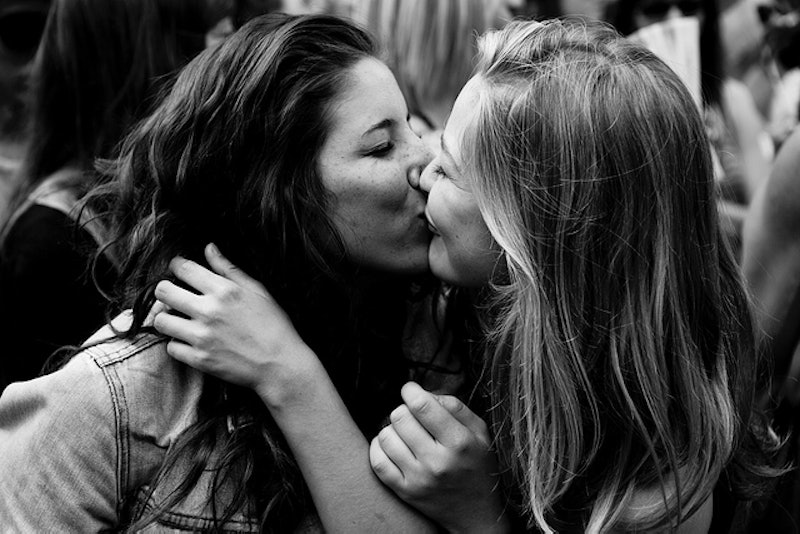 Reach for the lip gloss and pucker on up, my friends! Monday, July 6 is International Kissing Day. The day is meant to remind us, in case we’ve forgotten, just how awesome kissing is, whether it’s a friend or a lover. That is, if we disregard the fact that each 10-second long kiss, of the French persuasion of course, results in the exchange of 80 million bacteria. But I’ll quit being a germaphobic killjoy on such a day.

Because kissing really is an international pastime and something we all love to do, Skout, a global friendship app, did some investigating into people’s kissing habits. They interviewed almost 5,000 people all over the United States about whom they’re kissing, where they’re kissing them, and who people would rather kiss instead of their partners. Among the interesting results that came tumbling in was that 19 percent would rather kiss their pet than their partner. Yep, people would rather cuddle on up to their real main squeeze and kiss their beloved Fido instead of whoever happens to be wowing them in the bedroom at the moment. Considering how I feel about my beloved wonder dog, I can’t say that I’m completely surprised.

But in addition to smacking lips with their animals, here other things about kissing that just might blow your mind this International Kissing Day.

1. Almost Half Of People Would Rather Kiss Their Pet Than A Family

While 19 percent of those surveyed would rather kiss their pet over their partner, 43 percent said that when it comes to kissing their friends or a family member, their pet wins every time.

2. Dogs Are The Most Kissable Pet

Of course! Not only do 75 percent of people kiss their pets, but 70 percent say that dogs are the pets to kiss. Way far behind, with almost a 50-point difference, are cats at 21 percent. Also on the list of pets people want to kiss are birds at seven percent and reptiles at two percent… because kissing a boa constrictor just warms the heart.

3. Kissing Requires The Coordination Of Over 100 Muscles

According to a team of British researchers, every French kiss involves a complex movement of 146 muscles, 34 of which are facial and 112 of which are postural. This could actually make one deduce that those who are bad at kissing, are some how not working all those muscles, at least not correctly.

4. More Men Than Women Are Into The ‘Hello’ Kiss

Although we don’t embrace the hello kiss quite like other cultures, Skout found that 61 percent of Americans said they were cool with a “quick” kiss hello when meeting up with a friend.

But when it was broken up by the genders, it was men, at 64 percent, who were even bigger fans of the hello kiss than the ladies. Although still in the majority, only 56 percent of women preferred to kiss hello.

While most people were totally open to greeting kisses, they were definitely not open to how the French roll within the double kiss. Instead, 75 percent of Americans said that the greeting kiss was only acceptable on one cheek, compared to the 12 percent who thought that the way the French do it, a la two cheeks, is the way to go.

6. Majority Of People Tilt Their Head To The Right To Kiss

According to a German psychologist, two-thirds of people tilt their heads to the right when they kiss. The researchers say the reason for this is that both in the womb and as babies, most of just naturally tilt our heads to the right, and it’s something that follows us our whole life.

7. Women Think Kissing Is More Important Than Men Do

A study of over 1,000 college students found that women place more importance on kissing than men do. For women, kissing is a way to gauge the relationship while guys mostly kiss as a means to have sex.

8. Throughout History Kissing Has Been Periodically Banned

On March 9, 1562, Naples, Italy banned kissing in public, making it punishable by death, due to a plague that was rapidly spreading through Europe. Then in 1910, France, of all countries, banned kissing on French train platforms because it was causing delays.

Most recently, in 2003, Moscow tried to ban kissing in public places, even if the two people were married. However, Russians weren’t having any of that bullshit, so they protested by kissing strangers on the street and the law never came to be.

9. Men Who Kiss Their Wives Every Morning Live Longer

According to a study by the University College London done in the 1980s, men who kiss their wives every morning live five years longer than those who do not. The reason being that kissing is good for the heart and lowers stress.

Although kissing affects most of our body, releasing dopamine and other hormones into our system, it also causes the pupils of our eyes to dilate. So, yes, this is why most people close their eyes when they kiss.

More like this
25 Quotes About Love To Share During Pride Month 2022
By Madeleine Aggeler and Emma Garza
How To See The Lunar Eclipse On May 15-16, 2022
By Kaitlyn Wylde
Here’s How To Reignite The Spark In A Sexless Relationship
By Vanessa Marin
Photos Of Boris Johnson Drinking At A Downing Street Lockdown Party Have Surfaced
By Bustle UK
Get Even More From Bustle — Sign Up For The Newsletter