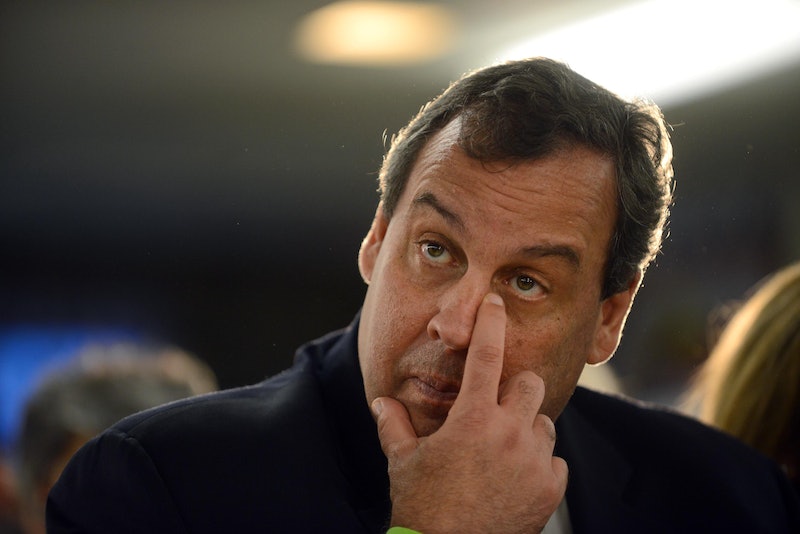 Sit down and shut up! Chris Christie, the 55th governor of New Jersey, is running for President. He made the announcement last Tuesday at his former high school in New Jersey, saying, "Today, I am proud to announce my candidacy for the Republican nomination for President of the United States of America." He added he'd be honest "whether you like it or not." Well, Governor Christie, here are some memes about you, whether you like them or not.

One of the many Republicans vying for the party's nomination, Christie is known for his "tell it like it is" attitude (which happens to be his campaign slogan). The not-so-secret Italian takes a blunt stance on marijuana and is pretty progressive when it comes to climate change. What else is he known for? Some pretty hilarious memes.

There are plenty of images out there on the Internet featuring Christie with food, or which make fat-related jokes. His weight is a constant source of conversation, especially after he got lap band surgery in 2013. To be honest, these are just lazy — fat shaming isn't cool. Plus, there are so many reasons outside of his looks to make fun of Christie. From his hotheaded outbursts to his double standards, there's plenty to work with.

On Hugh Hewitt's conservative radio show, Christie called marijuana a "gateway drug" and said he is strongly against its legalization. He said, "Marijuana is an illegal drug under federal law. And the states should not be permitted to sell it and profit from it." But in 2014, Christie signed a bill to legalize sports gambling in New Jersey.

In a 2014 press conference, Christie infamously told NBC's Kelly O’Donnell, "I am not a bully." Interestingly enough, he also told a man at a press conference in October to "sit down a shut up." It's been a while since middle school, but that sounds like a bully.

So, this meme is a little off. Christie has cut one billion dollars in funding from public schools, according to Politifact. As for corporate welfare, Politifact also reported that the New Jersey Policy Perspective released a report saying that the state has given "$2.1 billion in tax breaks and grants to companies during the past three years that Christie been in office." Remember that he announced his campaign at his old (public) high school.

According to NJ.com, in February, Christie released a report saying that New Jersey should freeze the pension system. The report said, "We recognize that there are elements of this approach that are likely to be unpopular at first, but believe in time they will be viewed as the best way to move forward." Yes, Christie, "unpopular" is right.

Does the word "Bridgegate" ring a bell? Christie and other officials were accused of purposefully creating a traffic jam by closing lanes in Fort Lee for political revenge. According to CNN, Christie allegedly wanted to get back at the Mayor of Fort Lee for not supporting him in the 2013 gubernatorial election. Christie was never implicated in the incident, but some of his officials were.

Chris Christie, you crack me up.