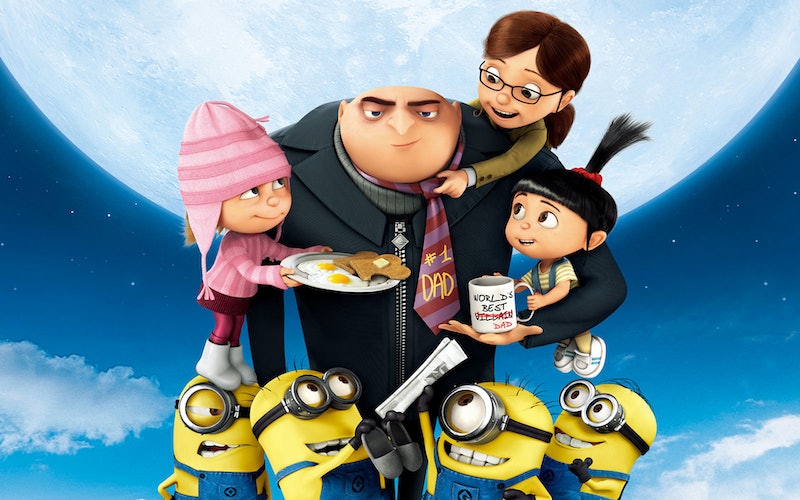 The Despicable Me franchise enters new territory on July 10 when its first spinoff film, Minions , hits theaters. Although Minions is centered on the now-iconic and extremely popular yellow henchmen from the first two Despicable Me films and features some stellar voice talent in franchise-newcomers Sandra Bullock, Jon Hamm, and Michael Keaton, fans still might be feeling nostalgic for Steve Carell's Gru and the rest of the Despicable Me gang. Even though a young version of Gru will be making a cameo in Minions , frankly, it's not enough. We need more Gru in our lives, and it seems the only way to get it is with a proper sequel to 2013's Despicable Me 2. So, when does Despicable Me 3 come out?

Unfortunately, we've still got a bit of a wait ahead of us. Despicable Me 3 isn't slated to premiere until June 30, 2017. Yes, we're aware that's a full two years in the future, which is definitely fodder enough for a supervillain origin story. But before you start making plans to steal the moon, know this: when it does eventually get released, Despicable Me 3 just might become the biggest hit of the entire franchise. Here are a few reasons why.

The Minions Have Raised The Bar

Already the breakout stars of the first two Despicable Me movies, the Minions are only going to grow in popularity following the debut of their own film. Especially when you consider the fact that Minions' opening weekend box office take is predicted be $85 million in North America, which would put it ahead of both Despicable Me's $56.3 million and Despicable Me 2's $83.5 million. No small feat, especially considering that the latter film went on to gross almost one billion dollars at the worldwide box office.

This Could Be Steve Carell's Last Outing

While nothing is confirmed, IMDb claims that Despicable Me 3 might be the last go-round for Carell as Gru, the franchise's star. Carell's performance (along with the Minions) has largely driven the series to this point, so it makes sense that a lot of people would turn out to bear witness to his swan song.

Inside Out Had Major Success

If a rising tide lifts all boats, then the success of Pixar's Inside Out can only be good news for Despicable Me 3. Inside Out has been a resounding critical success and will likely surpass Monsters University's total domestic box office take by its fourth weekend to become the animation studio's biggest hit since 2010's Toy Story 3 . With Pixar, seen by many as the leader in film animation, officially out of their recent slump (if you want to call it that), then other animation studios like Despicable Me 3 producer Illumination Entertainment can only benefit.

It's gonna be a long time before the next Despicable Me movie hits theaters, but thankfully, we have this month's Minions to make the wait go smoother before Gru and the rest of his gang come back into our lives for another round.