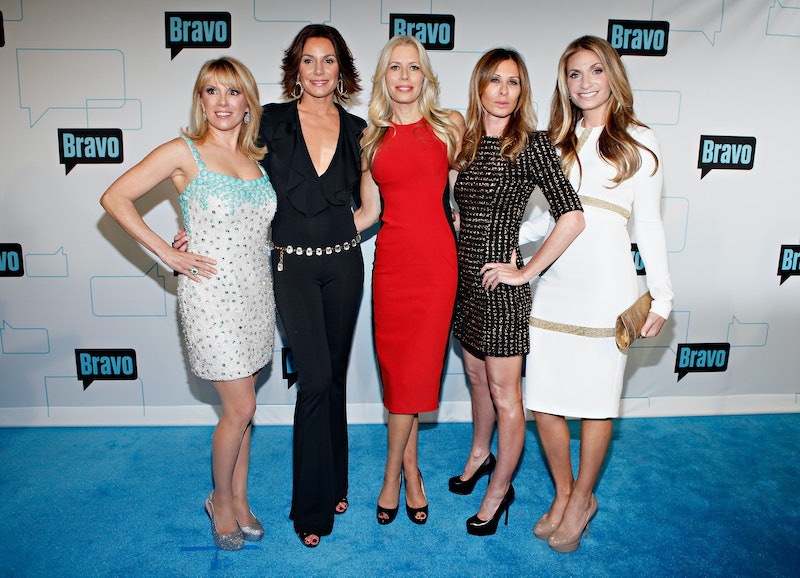 Ever since Bravo introduced the world to The Real Housewives franchise in 2006, the level of insanity has gone from brow-raising to extreme WTFness. Literally, every episode from every city from the past nine years has found the wives in some sort of crazy conundrum or another. But, I have to say that there’s something about the past year of Housewives that classifies it as the franchise's craziest yet.

Perhaps it has to do with all the talk about Housewives being fired (allegedly) and replaced by fresh new faces. Then again, maybe it has to do with the fact that some of the off-screen drama has overshadowed the actual show — let's be real, things like the Giudices' legal troubles can't be simply explained away by a full moon. There’s been a lot more madness to the show than one of the cast members going completely bonkers on their annual vacation from hell, or your typical clique war amongst Housewives. Something is definitely in the wives' water, and whatever it is has caused them to act out in ways that shock even the franchise's most seasoned viewers. (Throwing a prosthetic leg across a table? That will never be normal.)

From slaps to prison time to the thickest of shade, here are six reasons why this has been the Housewives' craziest year to date:

In what has been arguably the hugest Housewives shocker to date, Real Housewives Of New Jersey's Teresa Giudice beginning her 15-month prison sentence helped this year get off to an absolutely shocking start.

Fans can pretty much count on this Real Housewives Of New York maven to bring the drama, but the details of Ramona Singer's divorce pushed this year's Housewives shockers to a new level.

What's really bizarre about this situation is the fact that Frankel previously said she'd never return to Real Housewives Of New York — but now, she's back in full force, and I am loving every single moment of it.

The Fights Have Gotten Way Out Of Hand

I thought those Posh fashion shows on the New Jersey franchise were wild, but thanks to Real Housewives Of Beverly Hill's Brandi Glanville throwing wine on Eileen Davidson and slapping Lisa Vanderpump in Amsterdam, this year's Housewives behavior has been increasingly more physical, which brings me to...

, and tossed in her shade-drenched towel for new endeavors.This may have been a crazy year, but I have a feeling there's even more unbelievably insane drama to come.Images: Giphy (6)

More like this
Everything To Know About 'RHONJ' Season 13
By Brad Witter
‘RHOBH’ Newcomer Sheree Zampino Is Still Close To Ex-Husband Will Smith
By Brad Witter
Everything To Know About A Potential 'Love On The Spectrum U.S.' Season 2
By Gretchen Smail
Trace Is Dropping Ominous Hints About 'The Temptation' Island Reunion
By Kadin Burnett
Get Even More From Bustle — Sign Up For The Newsletter