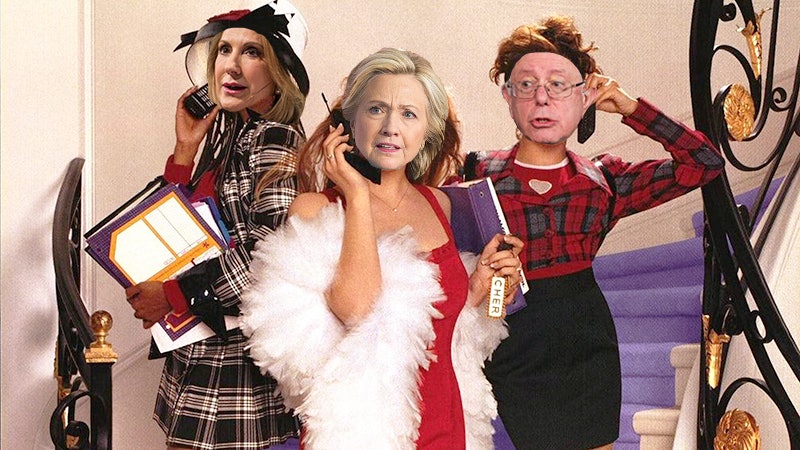 It's been 20 years since Clueless first changed how we talked, shopped, and navigated our social lives, but has time made the film irrelevant? As if! I mean, just imagine if the presidential candidates were Clueless characters and starred in the seminal film of our adolescent years. It'd be more than just a face-off of who's the most "ensembly challenged." After all, the presidential election is really a deranged social experiment of who can outtalk the competition and convince everyone else they're the coolest kid in school. And, who should run the country, but whatever!

In this election season, we've got the loudmouths, the WTFs, and, of course, the "clueless" so it's your pick on who you can see becoming your commander-in-chief. But there are so many other important things to consider. Who would be the friend cruising with you in your loqued out Jeep? Whose rhetoric would come out on top in Mr. Hall's debate class? Who would best lead as captain of the Pismo Beach disaster relief??

The Clueless reunion we died over seeing last year may have come and gone, but if you're aching for more, don't be all totally buggin'. Look no further than the very people who want to be your next president.

Cher is the most recognizable girl at school, and that's exactly the role Hillary Clinton is taking on in this election. Cher is particular about the company she keeps, and it's no secret that access to Clinton has been limited in the first few months of her campaign. Both women are unapologetic about their opinions and know exactly what they want. No matter how many girls may want to be her, Cher is irreplaceable, and let's face it, there will never be another Hillary Clinton.

Dionne was the cool girl at school who kept her man in check and the perfect gal pal with her braids and hats and all. Carly Fiorina was a trailblazer in her own right, becoming the first female CEO of a Fortune 20 company when she took the helm at Hewlett-Packard in 1999. But the Carly-Dionne connection, to be honest, is more inspired by the very real-life POVs of Stacey Dash, the actress who portrays Cher's BFF. Dash, who joined Fox News as a commentator in May 2014, has never been shy of spewing her conservative thinking, which unfortunately usually comes at the cost of women's rights.

Experiencing a sudden berth in popularity, Bernie Sanders takes the role of Tai in this election season. Sanders and his long-standing platform against income inequality has made him rise in the political ranks. Pundits and politicians alike are noticing how the self-professed democratic socialist has become the belle of the election ball, drawing together tens of thousands of supporters at mega-rallies. It's enough to make all the other candidates, including front-runner Clinton, side-eye his campaign. And with his bewildered mad scientist hair, Sanders does have that "adorably clueless" look down pat.

Cher's step-brother Josh is an aspiring environmental lawyer who's super conscious about social issues. Along with advocating for LGBT rights and undocumented immigrants as governor of Maryland, Martin O'Malley has made climate change a big part of his presidential platform with an aggressive plan to put the country on 100 percent clean energy within 35 years. Whether O'Malley can get Marky Mark to plant a celebrity tree has yet to be seen. But no biggie, because O'Malley is probably the easiest on the eyes in this election. (I mean, have you seen his polar plunge photo?)

Chris Christie is one of the more recognizable GOP contenders, largely because of what comes out of his mouth. Sound familiar? With her outspoken POV, Amber veers on intelligent discourse to obnoxious bashing, but she's always "telling it like it is." The girl can handle her own when it comes to debate class, and Christie will likely bring to the GOP's oral showdowns lots of amazing one-liners that we'll all be quoting the next day. You either love or hate Ambular, and the same can be said about Christie.

Clueless character: Travis a.k.a. The Stoner

Rand Paul's campaign has largely been out of the limelight since louder candidates have stepped forward in the months since the Kentucky senator first announced his bid. But Paul continues to pop up at the most random times, usually to contest other people's policies instead of putting forth his own. But the one thing Paul has in his pocket is the green support of medical marijuana lovers. You can bet Travis would be toking it up at a Paul kickback.

Wealthy? Check. Full of it? Check. Questionable attitude towards women? Check and check. Elton and Donald Trump are the same in their entitled ways, and both are definitely a "snob and a half," as Cher would say. OK, maybe two snobs in Trump's case.