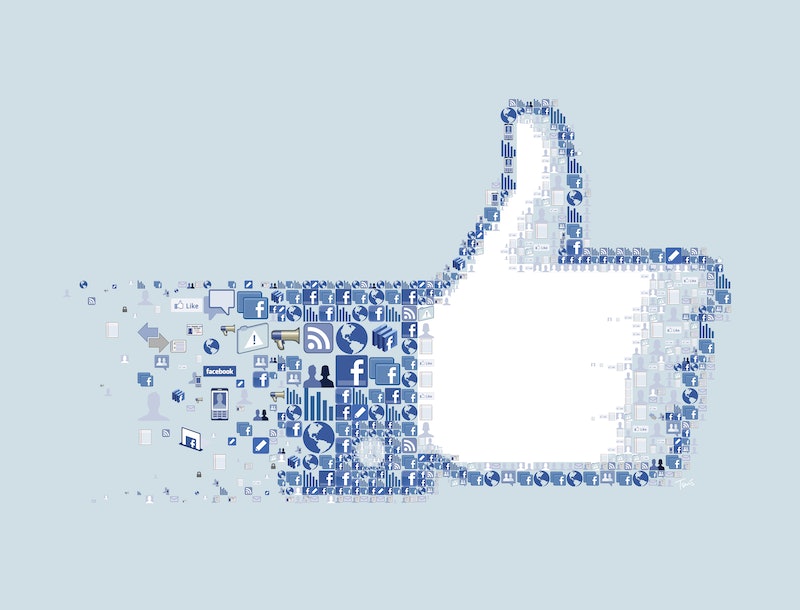 For too long, women have been standing behind men. That was the brilliant idea that inspired Facebook design manager Caitlin Winner to redesign of the Facebook "Friend" icon and the "Groups" icon. In the most epic Medium post ever, Winner said she noticed that the small male icon used all across Facebook was symmetrical, while the female icon literally had a "chip" on her shoulder from where the male icon intersected it to stand in front of her. In the icon, not only was the man standing in front of the woman, but his silhouette was also larger than hers. Winner wrote that she "assumed no ill intentions, just a lack of consideration, but as a lady with two robust shoulders, the chip offended me."

Winner's proud feminism goes on throughout the post to explain the idea behind the new Facebook friend logo, which places the woman in front of the man and makes the two icons the same size. Winner also noticed that a single male icon is often used across Facebook to represent different actions. To fix this, Winner drew a female single silhouette icon too. Winner explained her thinking behind the repositioning of the Friends icon in her Medium post:

As a woman, educated at a women’s college, it was hard not to read into the symbolism of the current icon; the woman was quite literally in the shadow of the man, she was not in a position to lean in.

Winner's fabulous nod to Facebook COO Sheryl Sandberg's mantra and book used to encourage female empowerment, Lean In, wasn't subtle — she seems to make it obvious that her reinvention is about including and empowering women. Winner didn't stop at the inherent inequality of the gendered icons though. She also wanted to fix the problem of using gendered icons, altogether, according to her Medium post:

It didn't seem fair, let alone accurate, that all friend requests should be represented by a man, so I drew a silhouette for cases where a gendered icon was inappropriate.

The Groups icon used to feature a man as the front, centered silhouette. Behind him, two smaller silhouettes stood: a man and a woman. The new icon features a woman's silhouette with a man and a gender-neutral silhouette standing behind her. Winner's thinking is brilliant for so many reasons. She understands that symbols matter:

As a result of this project, I’m on high alert for symbolism. I try to question all icons, especially those that feel the most familiar. For example, is the briefcase the best symbol for "work"? Which population carried briefcases and in which era? What are other ways that "work" could be symbolized and what would those icons evoke for the majority of people on Earth?

Winner understands that some icons, when they traditionally favor male power and history — such as the briefcase — are helping that power and history endure. In order for women, or any unequal minority, to be truly empowered, we must raise them up with policies and icons that favor their power.

For example, policies that require more women on corporate boards or policies that allow working mothers more paid time off are not actually "favoring" women or giving them "special treatment." In reality, they are recognizing the fact that men have been favored and have been given special treatment by culture, the justice system, and employers for centuries. According to Martha Minow, a feminist theorist, these standards that elevate and help women are only seen as "special" through a social norm where men are favored. If we viewed paid maternity leave or requirements that prohibit discrimination in the workplace through a human norm (or, hell, how about a female norm), then they would seem totally fine. Through either the human or female-favored lens, benefits for a broken leg or prostate cancer would then seem like special treatment, or they would at least be out of the ordinary.

Putting a woman at the front of the Facebook icon gives them more symbolic power than they had before, but it certainly doesn't allow them more tangible power, like access to jobs or salaries comparable to their male counterparts. (The debate surrounding the Confederate flag has shown us why symbols translate to real action and social hierarchies.) This symbolic power is a very small step in the fight to make women equal to men, but it's a necessary step when women's sports are continually treated as lesser than, when women are still paid 77 cents to the dollar a man makes, and when women are still more often the targets of sexualized violence.

A symbol that favors or equalizes women on a social network used by 1.44 billion people worldwide can be just as subconsciously and culturally powerful as requiring more qualified women be elected to corporate boards, especially when the designer acknowledged that the change resulted from a need for equality. Winner understands that our symbols have real impacts, and if we want women or gender-neutral people to be able to stand up in front of men or beside them, then we, as metaphorical designers, have to take it upon ourselves to give them that new position.

More like this
Sandra Bullock, Girlboss Extraordinaire
By Matt Harkins & Viviana Olen
The 'Hocus Pocus' Sequel Finally Has A Release Date & It Makes Total Sense
By Shannon Barbour and Radhika Menon
How The City Healed Five Years On From The Manchester Arena Attack
By Ella Glover
'Harry’s House' Is Inspired By A Japanese ‘70s Pop Icon & TikTok Fave
By El Hunt
Get Even More From Bustle — Sign Up For The Newsletter