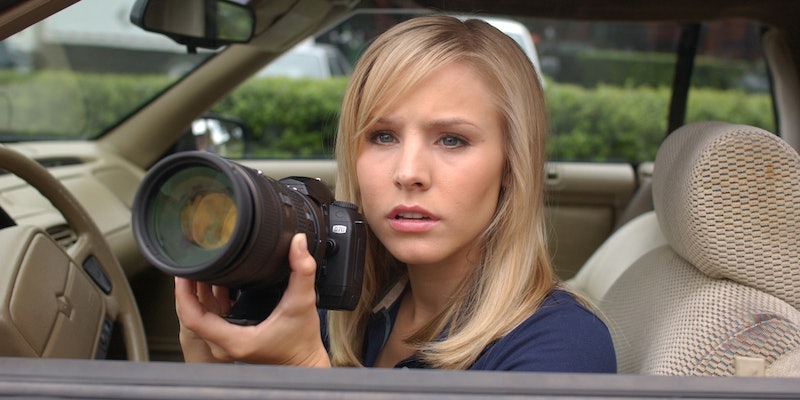 Some might say that Veronica's ability to shut people up with her own wordy warfare was a defensive mechanism. Maybe that's true when it comes to the perpetually jerky residents of Neptune — but her way with words was also the thing that endeared Veronica to her slew of loyal fans. Any Marshmallow secretly wants Veronica's verbal sparring skills — but it's not exactly an easy feat to accomplish. Sometimes the only thing you can do is memorize some of Veronica's more clever comebacks and hope that there's a situation where you'll be able to use them in real life.

So just how good are you at memorizing Veronica's snappy one-liners? Try to fill in the blanks in these Veronica Mars quotes and find out (answers below):

A. "make you speak."B. "wave a snausage under your nose."C. "ask you to bark."D. "make sure no one's around to hear your stupidity."

A. "suggesting military school"B. "shipping off your girlfriends"C. "suspecting you of murder"D. "taking you to the principal's office"

A. "you really were a Disney princess."B. "your middle name was Pollyanna."C. "cartoon birds braided your hair this morning."D. "you're going to rule us all one day."

1. "Shut up! If I want you to speak, I'll wave a snausage over your nose." (B)2. "I hope we're still friends after I taser you." (A) 3. "Do you not instinctively fear me? Maybe you should write yourself a note." (B)4. "You know, I'm not sure, but I think when they start shipping off your girlfriends, that officially makes you a bad boy." (B)5. "Meg, you're the last good person at this school... I'd believe cartoon birds braided your hair this morning." (C)6. "It's like you're this giant jackass piñata begging for someone to beat the candy out of you." (A)7. "The '70s had the hustle, the '80s had the moonwalk. We have the faux lesbian dance." (C)8. "Would it be weird to start my own drinking game? Like, I have to do a shot every time someone asks for my help." (D)9. "If I ever die, do me a favor... go on Oprah and tell the world I love kittens." (D)

If you got more than six of these answers right, then congratulations: you're a true Marshmallow at heart.