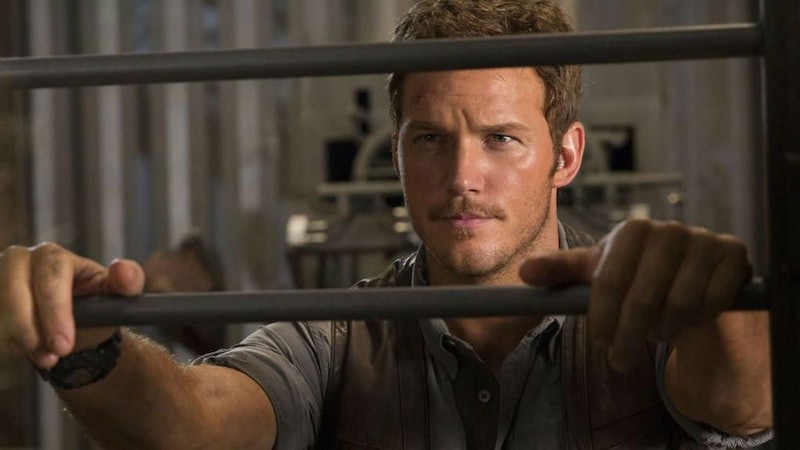 After seeing Jurassic World, the latest movie in the dinosaur-centric franchise, there's only one appropriate reaction to have: need. More. Now. I'm not talking about the terrifying velociraptors, of course (those can stay gone for a long, long time) but action hero Chris Pratt, who looks very fine in his attempts to save the world from total disaster. Thankfully, more Pratt-as-movie-star time is likely on the way; the second film in the franchise is likely to arrive in around two years, and Pratt has said that he'll star in whatever sequels arise. But exactly how many Jurassic World movies will there be? There's only so many times scientists can forget that dinosaurs and people aren't a winning combination, right?

Apparently not. Although no sequel at all is confirmed just yet, it's very likely Jurassic World 2 will be announced shortly, considering the blockbuster success of this summer's film and the comments director Colin Trevorrow has made about the potential for follow-up films. But say that one comes out in a few years, and does as well as the first movie — will Jurassic World 3 be an automatic yes? Jurassic World 4, even? How many Jurassic movies are we talking about, here? It could be a lot — speaking to Entertainment Weekly, Pratt said, "I am [signed on for a Jurassic World sequel]. They have me for I think 38 movies or something." Of course, he was exaggerating (at least, I hope he was), but it does imply that he's signed on to more than just one upcoming movie. I wouldn't be surprised if two or three more Jurassic sequels are already planned out.

According to one of Pratt's co-stars, there's a definite possibility that it's at least that many. Speaking to ComicBook.com, Ty Simpkins, who plays teen park visitor Gray, revealed that he signed on for three movies with Universal.

"It's actually standard I think with most studios to have the actors sign multi picture deals. I did sign a 3 deal contract but I guess that just means if they made it and my character was in it I would be in another Jurassic project," Simpkins said.

It's promising news for those aching to get more dinosaurs and Chris Pratt in their lives (and seriously, who isn't?). Action movies come our way all the time, but rarely are they as entertaining, suspenseful, and just as genuinely good as Jurassic World. Sequels are a definite must, and judging by Pratt and Simpkins' statements, the studio has every intention of making them happen ASAP.

As for what, exactly, all those future movies might be like, it's hard to say; Jurassic World 2 might be that dinosaurs-used-for-the-military theory fans of the first movie are already expecting, but as for the ones that follow? It's totally up in the air. Considering that each movie would likely take at least a year to make, plus another year or so for promotion, Pratt, 36, could be in his forties before the third and fourth movies come along. I'd still want him on-board, of course (seriously, he could be 80 and I'd still want him to star in everything, ever), but the plots might have to change. What if he's settled down with kids, and doesn't want to be fighting velociraptors every day? Or what about the movie's technology — surely, be 2020 or whatever, they would have found a way to male electric fences totally unbreakable, right? And Bryce Dallas Howard's character would've bought a pair of flats by then, yeah?

Whatever the probable Jurassic sequels might bring, one thing's for sure: I'll be seeing them all, and enjoying every terrifying, panic-inducing moment.