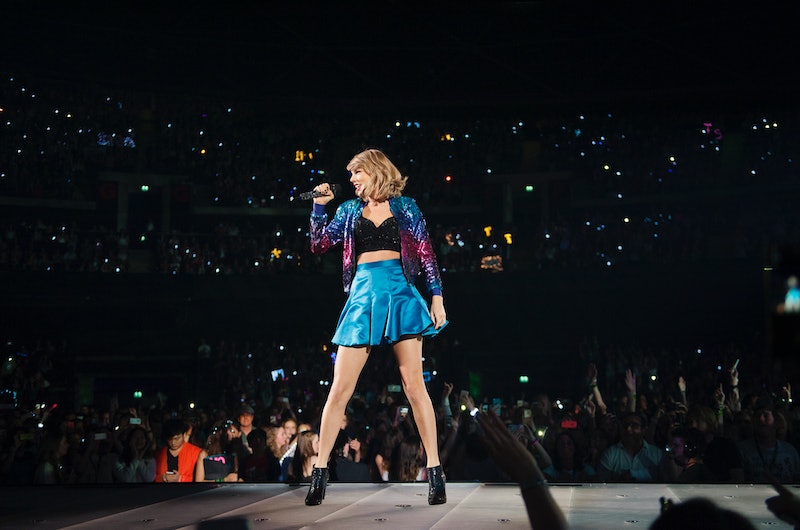 Taylor Swift is a busy woman. Apart from the fact that her album 1989 is breaking records faster than the speed of sound, she also somehow makes time for her ever-growing gang of powerful, beautiful women (and a few lucky fellas, like her BFF Ed Sheeran). In other words, the 25-year old singer is all but superhuman, so it shouldn't be surprising that she hangs out with superheroes: Simon Kinberg, a writer and producer for X-Men: Apocalypse, posted a photo on his Twitter of Taylor Swift, himself, and X-Men: Apocalypse stars Sophie Turner (who's playing a young Jean Grey) and James McAvoy (who's playing a young Professor X) hanging out. He captioned it "haters gonna hate," which is, of course, a shoutout to Swift's hit song "Shake It Off."

Obviously, fans (OK, mostly me) wanna know: does this mean Swift is gonna make an appearance as a mutant in the '80s-extravaganza that is Apocalypse?! That's unclear and probably unlikely (although, I'm sure it would do the franchise wonders if the "Bad Blood" singer showed up on screen with some feathered bangs and some superhuman powers) — but, even if she isn't going to join our favorite mutants, Swift is just about as close to an IRL superhero as somebody could get. Besides changing the music industry every single day and raking in the dough, Swift seems like she really is out there for the greater good.

Here are six reasons it makes perfect sense that she hangs out with the X-Men:

She's Got Her Own Girl Gang

She's Learned To Shake Off The Haters

Which is BASICALLY rule number one of being a part of the X-Men: you gotta learn to love yourself, mutant or not.

There Are LOTS Of Powerful X-Women

Jean Grey, Storm, Mystique, Kitty... the X-Men universe includes a lot of badass women, and, of course, Taylor Swift would fit right in amongst them.

In 2014, DoSomething.org named Taylor Swift the world's most charitable celebrity, noting the fact that she's donated over $100,000 to a number of causes. And, her philanthropy gets personal: she's known for writing notes to her fans and encouraging them to be strong. I'm not crying, you're crying.

She Can Control Minds

OK, not literally. But! This year, when Swift called out Apple to change its streaming policy to be more fair to artists, they LISTENED.

She's Clearly On A Mission

Just like the X-Men, Swift is on a mission — and whatever her ultimate goal is (world domination? Pretty please?), it's more than crystal clear that she is definitely taking no prisoners along the way, and she's assembling her own super girl gang as she goes along. Her "Bad Blood" video was indication enough: she's here to stay, and she's gonna change the world for the better. Now THAT is definitely X-Men behavior.

so, anyone else dying for a Swift/X-Men movie right about now?