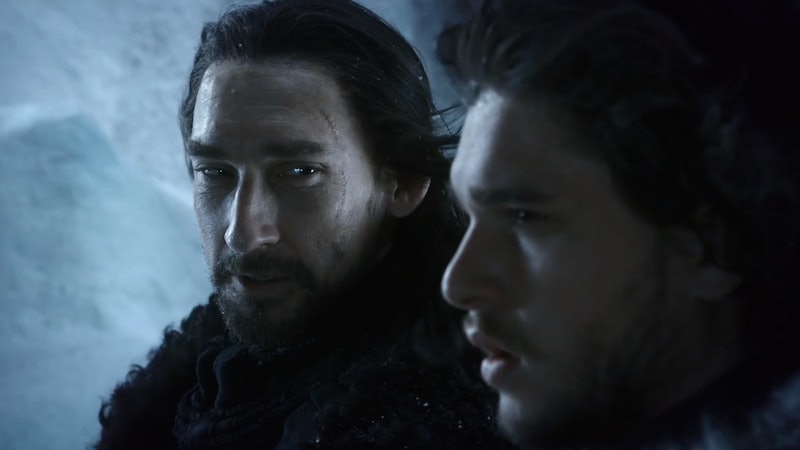 When showrunners David Benioff and D.B. Weiss spliced together the "previously on" segment for the Game Of Thrones Season 5 finale, they knew exactly what they were doing. By mentioning Jon Snow's long-lost uncle Benjen Stark, they were killing two birds with one stone: Enticing book readers with the promise of solving of a mystery that George R.R. Martin has yet to deal with; and throwing non-book readers off the scent of Jon Snow's death with a well-timed distraction. It turned out that the Night's Watch was merely invoking Benjen's name in order to corner Jon in a secluded part of Castle Black so they could kill him. But, the memory of the missing Stark made many viewers genuinely curious: What did happen to Benjen, after all?

The character, played by actor Joseph Mawle, only appeared in the first three episodes of the first season of Thrones, and yet his absence has lingered over events at the Wall ever since. In the first episode, we meet him in Winterfell at the feast the Starks are throwing in honor of King Robert's visit. Jon tells his uncle of his intention to join the Night's Watch, and Benjen agrees to think about it. In the second episode, he's seen escorting Jon and Tyrion Lannister to Castle Black. And, in the third, he has a conversation with his nephew atop the Wall before heading out on a ranging, never to be seen again.

Season 1 was the most faithful to George R.R. Martin's source material, and as such, Benjen's storyline follows his book counterpart's relatively closely. Though, on the page, the First Ranger is a bit more resistant when Jon tells him of his plans to enlist, trying to talk the young boy out of it:

"You don't know what you're asking, Jon. The Night's Watch is a sworn brotherhood. We have no families. None of us will ever father sons. Our wife is duty. Our mistress is honor. [...] You are a boy of fourteen," Benjen said. "Not a man, not yet. Until you have known a woman, you cannot understand what you would be giving up. [...] Come back to me when you've fathered a few bastards of your own, and we'll se how you feel." — A Game Of Thrones, Chapter 5

When Jon begs Benjen to take him on the ranging, his uncle coldly refuses. "On the Wall, a man gets only what he earns. You're no ranger, Jon, only a green boy with the smell of summer still on you." But as Benjen sets out with his fellow rangers, Jon has a disturbing vision:

As he watched his uncle lead his horse into the tunnel, Jon had remembered the things that Tyrion Lannister told him on the kingsroad, and in his mind's eye he saw Ben Stark lying dead, his blood red on the snow. The thought made him sick. — A Game Of Thrones, Chapter 19

Five books/seasons in, we know that Jon — along with the rest of the Stark children (with the exception of Sansa, whose direwolf, Lady, was killed) — has begun developing magical powers. Mostly, their powers involve warging into their respective wolves, wittingly or unwittingly. But, we know that Bran has evolved an even more advanced skill set, learning the power of "greenseeing" with the Three-Eyed Raven beyond the Wall. Could Jon have more power than he knows? Could his vision of his dead uncle have been an actual prophecy?

We know that something untoward happened to Benjen, since he never returned to Castle Black, and the rangers he was with were found dead... until their bodies reanimated and tried to kill Jon and Lord Commander Mormont.

In Jon's last AGOT chapter, he and Mormont set out beyond the Wall on a Great Ranging, with the Lord Commander promising his steward that they'll locate his still-missing uncle. "I mean to find Ben Stark, alive or dead," he vows. "I will not sit here meekly and wait for the snows and the ice winds. We must know what is happening." With such a strong declaration ending Martin's first book, you would expect the hunt for Benjen to be a major focus of A Clash Of Kings. But, the Night's Watch soon gets distracted from their mission by wildlings and White Walkers, and Jeor Mormont is killed by his own men before he can fulfill his vow.

Benjen is only mentioned a handful of times in the third book, A Storm Of Swords, although there is a small hint that may point to his survival. One of Jon's chapters opens with him having a dream — and as book readers know, dreams are often significant, if not outright prophetic. In the dream, Jon finds himself in the crypts of Winterfell, searching for his family. "'Father?' he called. 'Bran? Rickon?' No one answered. A chill wind was blowing on his neck. 'Uncle?' he called. 'Uncle Benjen? Father? Please, Father, help me.'"

It's curious that he can't find any of the people he seeks in the crypts. Of course, as we know, neither Bran nor Rickon are really dead, despite what Jon believes. But, what about his father? We all know Ned got his head chopped off way back in Season 1 Well, if the popular R+L=J theory is true, then Ned isn't really Jon's father — but rather Prince Rhaegar Targaryen, who wouldn't be caught dead in a Stark tomb. (Pun intended.) But, if Jon can't even find his beloved uncle there... does that mean there's hope Benjen could still be alive?

There's no mention of Benjen in A Feast For Crows, which makes sense since Jon sits the entire book out. But, when Jon reappears in A Dance With Dragons, Martin makes sure to remind readers of Benjen's existence:

It was no easy thing to send men into the wild, knowing that the chances were good that they might never return. They are all seasoned men, Jon told himself ... but his uncle Benjen and his rangers had been seasoned men as well, and the haunted forest had swallowed them up without a trace. When two of them finally came straggling back to the Wall, it had been as wights. Not for the first time, or the last, Jon Snow found himself wondering what had become of Benjen Stark. Perhaps the rangers will come upon some sign of them, he told himself, never truly believing it. — A Dance With Dragons, Chapter 28

Why would Martin continue to belabor this point if he didn't intend to resolve it at some point? Surely he could have let the specter of Benjen fade five books in if the only point of his vanishing was to illustrate the dangers of life beyond the Wall. The scattered if persistent references to the missing Stark continue to stoke the fires of readers' curiosity, provoking a large amount of theories that range from the possible to the insane to the thoroughly debunked.

Will Benjen make a triumphant return in Season 6 in time to wreak some unholy vengeance on the traitors who murdered his nephew? Maybe, or maybe not. At this point in the show, the only thing that's certain is that, well... just ask Benjen: