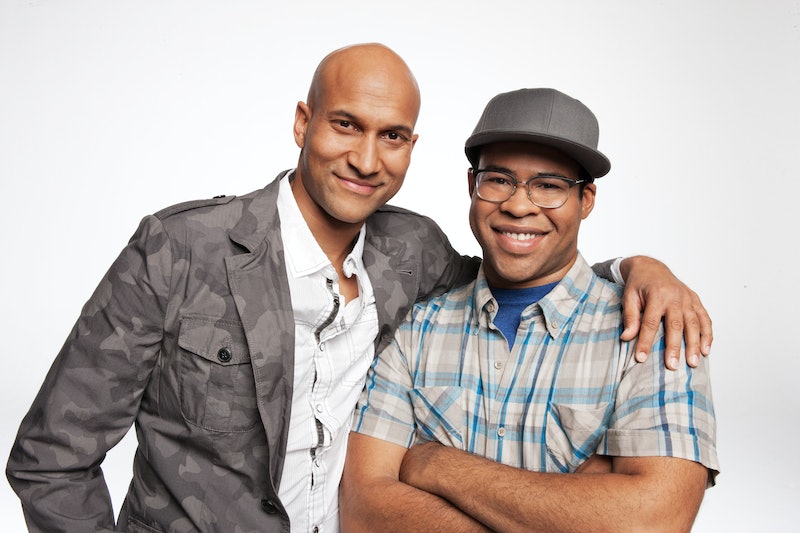 The best comedy makes you think, and the season premiere of Key & Peele did not waste any time getting serious. The episode closed with a sketch on police brutality and trigger-happy culture. Keegan Michael-Key, dressed as a white police officer, went through a neighborhood and routinely shot down innocent black men while letting increasingly dangerous white men walk free. The sketch is parodying the reports we often get about police officers who allegedly profile and brutalize seemingly innocent people of color. It also calls attention to our national disillusionment and seeming disinterest in mass shootings.

Because this is a comedy sketch and not a documentary, the scene quickly heightened and became somewhat cartoonish. According to the officer, a man holding a stuffed giraffe had a "big fluffy gun," and the cop even shot his own captain after mistaking his styrofoam coffee cup for a weapon. He asked a white man armed and with visible ammunition to please vacate the area as it had been deemed "dangerous." Naturally, this is all to call attention to the crazy double standards at play. At the end of the sketch, the cop seemingly recognized his wrongs, but shrugged it off saying "the last seven came out of nowhere!"

Of course, it was funny in a way that's also very not funny. By definition, satire exists on a very thin line. If the sketch makes you uncomfortable it absolutely should, because this is a very real issue in our society. Nervous laughter is just as valuable, especially when it comes to social messages. I much prefer something like this than shock for shock's sake. Key & Peele have covered this issue before with a musical sketch last year as well as the 2013 sketch "Hoodie," but the message this time around is clear — enough is enough. This kind of racism is deadly, horrifying, and exhausting. It needs to end.

More like this
The 'It's A Sin' Creator Revealed A Massive Detail That Didn't Make The Final Cut
By El Hunt
Elizabeth Olsen's Chris Evans Friendship Update Was Accidentally Hilarious
By Grace Wehniainen
Colin Firth Revealed His Favourite Mr. Darcy (& No, It's Not Himself)
By Sophie McEvoy
'Doctor Who’s New Star Is Already Huge On TikTok
By Maxine Harrison
Get Even More From Bustle — Sign Up For The Newsletter