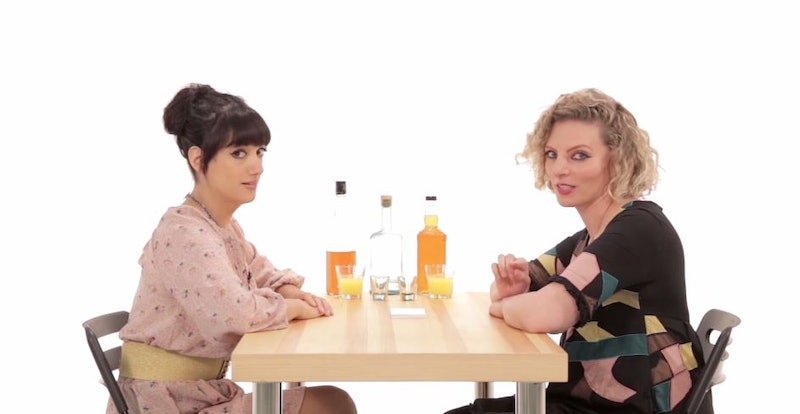 Everyone knows that the best drinking games are the ones that capitalize on alcohol's inhibition lowering effect. That's why you'll find more kids in college playing "never have I ever" or "J'accuse" than you ever did in middle school: personal, secret-sharing games are so much more fun when everyone's just a little bit less self-conscious. Cut Video's newest addition to their hilarious video series clearly understands this concept, asking best friends to play "Truth or Drink." The rules are simple: Answer a series of random, personal questions, or pass by taking a shot.

While the previous iterations of this drinking game have been great, I think they nailed it with the BFF edition: There's just something sacred about the bond between best friends that's even more adorable than the one between couples. They're also brutally honest with each other, which makes questions like, "Did you ever have a crush on someone I was dating?" especially fun.

The one element of this game that's crazy to me is that these friends agreed to play this on camera. Like, there are certain questions that I would 100 percent answer honestly to my best friend, but might end up passing on if I knew the entire internet (including my grandparents) were going to be able to find it. I guess that's the beauty of this game: the more questions you pass on, the more shots you take — which makes it more likely that you're going to say some incredibly embarrassing stuff as the game drags on. It's like a drunken, wonderful catch-22 of friendship.

It's honestly hard to pick highlights from the video because the whole thing is really top notch, but here are some good ones:

1. When This Girl Started Drinking Early Instead of Answering, "Have You Ever Had a Crush On Someone I've Been With?"

2. When This Guy Chose to Sit On His Friend's Lap and Stare into His Eyes for a Minute Instead of Taking a Shot

3. When These Friends Toasted to "Edward Penis Hands"

4. When This Guy Said His Friend Used to Hit On His Wife and His Friend Just Nodded and Went, "Yeah"

Watch the whole video here. You won't regret it, but you may end up calling your best friend and asking her to bring over a handle and play the game with you. Just FYI.