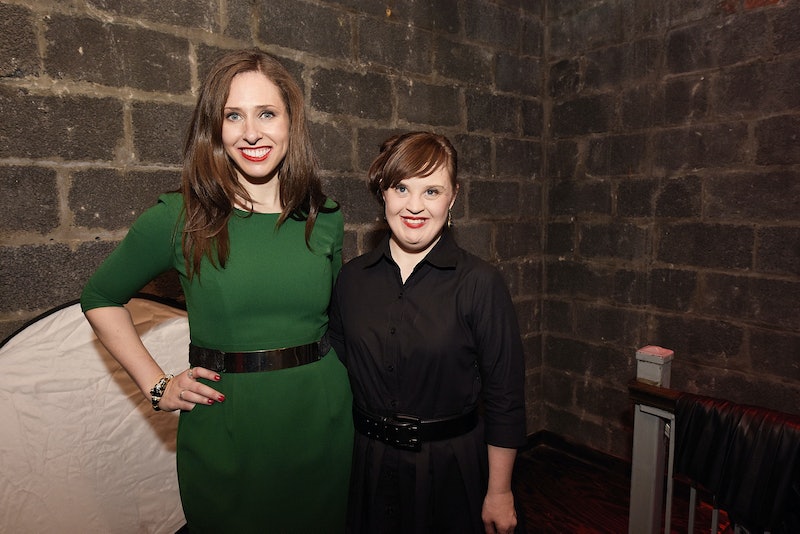 A champion and indeed an architect of progress, fashion designer Carrie Hammer gave a motto to the industry when she labeled her coterie of multitalented executives and savvy style icons "Role Models Not Runway Models" in February of 2014. With a host of brands now following suit by featuring models of all talents, ethnicities, sexual orientations, genders, and proportions, it seems Hammer's prescient initiative has blossomed into a worldwide imperative to increase diversity and body positivity.

As any true fashion devotee can attest, the fashion industry's standards of beauty are constantly in flux, one moment extolling the virtues of straight hair and flared denim, and pairing voluminous curls with androgynous suitings the next. However, the fashion industry at present is in the midst of a rare, radical moment of introspection, when preconceived, narrow notions of perfection and beauty are being thrown to the wayside in favor of broader definitions.

And though pinpointing the exact impetus of the phenomenon would be more difficult than attempting to explain to a fashion novice why Birkenstocks went from non grata to de rigueur in a matter of months, the movement towards naturalistic beauty has occurred in large part because of the recent profusion of models who exemplify diversity, not homogeneity.

One of the fashion industry's greatest shortcomings in years past has been the employment of models who fit a certain phenotype; namely, those who are sylphlike, six feet tall, and most commonly, caucasian. Due to sheer probability, there will always be consumers who fit this narrow sketch, but the vast majority of the purchasing population isn't an exact match.

Years of viewing this phenotype has left younger generations with the belief that aesthetically diverging from the norm is unacceptable, even unattractive. And the fashion industry has thus been in desperate need of a makeover for some time.

Enter Hammer and her successors, who have brought to international attention the severe shortage of models who not only mirror the population's heterogeneity, but also encourage consumers to think of beauty as more than simply cosmetic. After Hammer chose to populate her runway with high-powered women such as Global Chief Creativity Catalyst of McCann Worldgroup Nicole V Cramer and Jamie Brewer, New York Fashion Week's first model with Down Syndrome, the fashion industry began to slowly, fractionally deconstruct its rigid regulations regarding how models should appear.

In May of 2015, swimwear and lingerie company Panache debuted its “Modeled By Role Models” campaign, which replicates Hammer's slogan not in only word but also in its choice to star women who are more than simply beautiful. The campaign features, amongst others, British wheelchair sportswoman Hannah Cockroft and plus size model Marquita Pring, each of whom contributes intelligence and humanitarianism to the campaign as well as beauty.

The fashion industry's reconfiguration has grown to address a number of inadequacies, including its previous dearth of plus size models, models of diverse ethnicities, models with disabilities, and transgender models. Plus size model Robyn Lawley's Sports Illustrated Swimsuit Edition cover was an affirmation for size 12 women everywhere, shortly followed by Lane Bryant's #ImNoAngel campaign, featuring plus size models, which received an outpouring of support for its embrace of a variety of figures instead of simply the size 0 industry standard. And two years after Joan Smalls graced the cover of ELLE in 2013, three models of color covered Teen Vogue 's August 2015 issue, including Imaan Hammam, Aya Jones, and Lineisy Montero.

The transgender community, too, has seen increased representation in the media and advertising world, from model Lea T's pioneering Redken shoot to model Andreja Pejić's breathtaking and groundbreaking Make Up For Ever campaign, and Caitlyn Jenner's moving editorial spread in Vanity Fair.

But what does this new age of diversified terms of beauty mean for those who don't inhabit the catwalk or the red carpet? Quite simply, the increase in the melange of models is a toast to diversity. Instead of whittling and molding themselves to fit into prescribed boxes of how to look and act, women can now embrace their singularity.

With the time spent fretting over how to equal the fashion industry's definition of perfection now blissfully free, it seems that imagination is the only limit to what women will be able to achieve.

More like this
What’s The Kibbe Body Type Test That’s All Over TikTok?
By Marilyn La Jeunesse
How Sunnies Face Is Championing Filipino Beauty
By Kristin Corpuz
How This Founder Manifested Ariana Grande As A Brand Ambassador
By Dominique Norman
Target Dropped *Two* New Fashion Collabs With Queer-Owned Brands
By Dominique Norman
Get Even More From Bustle — Sign Up For The Newsletter