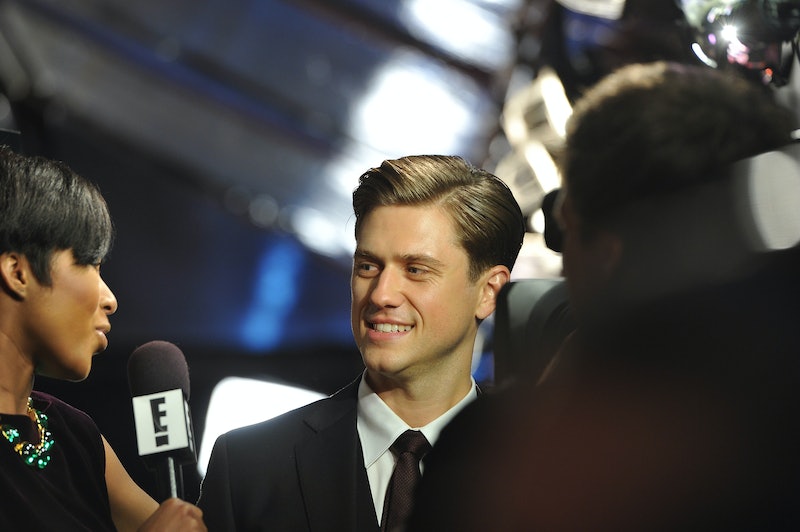 "You're the one that we want!" Those were probably the words that were said when FOX called to tell 31-year-old Graceland actor Aaron Tveit that he will be Danny Zuko in their upcoming live performance of the popular musical Grease. The 31-year-old actor will star as iconic bad boy and leader of the Thunderbirds, Danny Zuko. He'll be appearing alongside Dancing With The Stars' Julianne Hough as Sandy Olsen, Disney star Vanessa Hudgens as the caustic Rizzo, and Scream Queens' Keke Palmer as Pink Lady Marty. (Other rumored cast members include Nick Jonas, Martin Short, and Olivia Newton-John herself as Rydell High's principal).

Grease: Live is FOX's answer to NBC's popular live musical broadcasts of Peter Pan and The Sound Of Music. While Hough and Hudgens are likely to be familiar names to anyone tuning in to a live musical performance, Tveit is a decidedly less famous to the broader American public, unless they happen to be Gossip Girl superfans. But that doesn't mean the young actor is a total unknown — in fact, he's had a wide range of success, from Broadway to film to television. Here are five places you may have seen him, even if you didn't realize it.

Most of Tveit's credits stem from the world of musical theatre — which makes sense when you're casting a production of Grease — but it explains why he may be unfamiliar to anyone outside of the New York City area. He started out on national tours of Rent and Hairpsray, and eventually stepped into the role of Fiyero in Wicked for a couple of years. In 2009, he originated the lead role in the musical adaptation of the 2002 Leonardo DiCaprio movie, Catch Me If You Can.

But by far his most famous stage credit is from the 2009 Tony-nominated rock musical Next To Normal, where he starred as the over-achieving son of a mother struggling with bipolar disorder. The show lost the Tony to the stage version of Billy Elliot, although it won the even more prestigious Pulitzer Prize for Drama — only the eighth musical in history to achieve that high honor.

Tveit's first role on television was the recurring character of Tripp van der Bilt III on Gossip Girl. Over the course of three seasons, the older cousin of Chace Crawford's Nate ran for Congress, had an affair with Blake Lively's Serena, got into one car accident, and caused another. (Those were 10 eventful episodes.)

In the years after his arc on Gossip Girl, Tveit appeared in a number of one-episode guest parts on TV shows like Ugly Betty, Body Of Proof, Law & Order S.V.U. (which he guest starred on twice in two different roles), and, most recently, The Good Wife, where he played AUSA Spencer Zschau. He basically got to sit in the courtroom and say the same line over and over again: "This testimony may infringe on the Classified Government Procedures Act." (Basically a fancy way of saying, "I plead the fifth.")

Throughout those same years, Tveit was also shoring up his resumé with some supporting film roles, including small parts in the likes of the Ricky Gervais comedy Ghost World, the James Franco-starring biopic Howl, and the Joseph Gordon-Levitt action flick Premium Rush. His biggest role to date came in the 2012 Oscar-nominated musical Les Misérables, in which he played Enjolras, the passionate (and golden-throated) leader of the student revolution.

In 2013, Tveit landed his biggest role to date on this USA drama about a group of undercover agents from the F.B.I., D.E.A., and I.C.E. living together in SoCal beach house. Tveit stars as rookie F.B.I. agent Mike Warren, who bonds with (and clashes with) senior agent Paul Briggs, played by Daniel Sunjata. Agent Warren pulled a Jon Snow when it seemed like he'd died during the Season 2 finale, but fans were relieved when Tveit's character turned up alive and well during the Season 3 premiere.

All in all, there can be no doubt that Tveit has the acting, and singing, chops needed to bring a whole new kind of Danny Zuko to the American public. I, for one, can't wait.

More like this
Doctor Who’s New Star Is Already Huge On TikTok
By Maxine Harrison
How Ncuti Gatwa's 'Doctor Who' Casting Impacts His 'Sex Education' Future
By Nola Ojomu
Elizabeth Olsen’s ‘SNL’ Cameo Made Benedict Cumberbatch A Multiverse Believer
By Grace Wehniainen
What’s New On Netflix: A Victoria Justice Rom-Com & The Return Of David Letterman
By Arya Roshanian
Get Even More From Bustle — Sign Up For The Newsletter