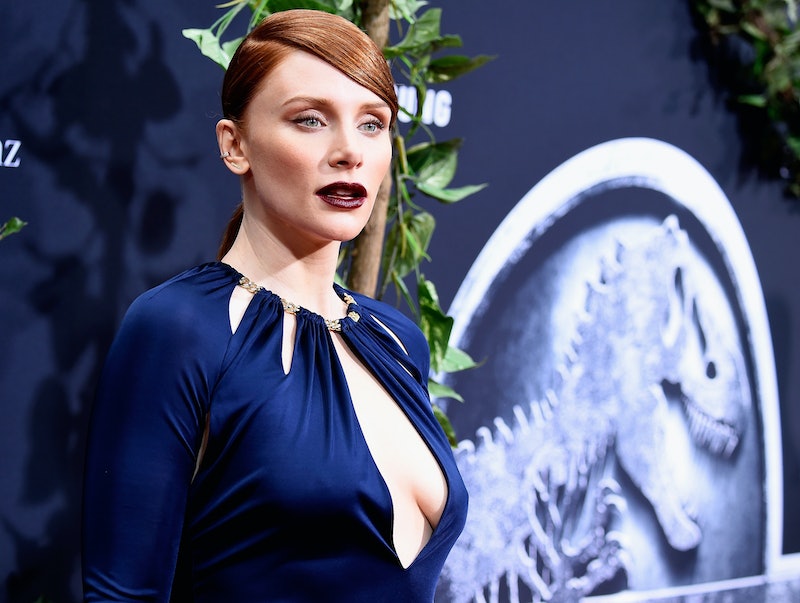 Although some have deemed it unfair, Bryce Dallas Howard has received a good deal of criticism for her role in the record-smashing Jurassic World. Some critics have considered her role of Claire Dearing to be nothing more than an outdated feminist caricature, due to her tendency to wear high heels while running away from dinosaurs. There are arguments that she's also stereotypically cold and unfeeling , with no time for kids or relationships until handsome and fun-loving Chris Pratt shows up to melt her heart. Yet I, for one, think people who believe that are wrong; Claire's not anti-feminist. In fact, she (and her portrayer) are a total badass, and these great Bryce Dallas Howard gifs and memes, below, prove it.

Because seriously, people: Claire Dearing is the hero of the film, and a testament to women's strength. And to be honest, a lot of that has to do with the fact that she kept her high heels on for the entire movie. I'd like to see how good Chris Pratt would be at doing that (spoiler: not very good). If it weren't for Claire, everyone on that island would have died, and I think she did a pretty solid job of containing the threat. So as a tribute to Claire killing it, and to stick it to the naysayers, here are nine memes that illustrate how Bryce Dallas Howard is a total badass.

OK, I know I've already mentioned the high heel thing, but it bears repeating. Nobody else could possibly run away from genetically-engineered killing machines in sky-high stilettos, on startlingly soft turf, mind you, other than Bryce Dallas Howard. That's just some next level badassery.

So what if Claire's a successful businesswoman? She runs Jurassic World, the most successful theme park in the world (I assume), and we don't think that's anything to be ashamed of. She knows what she's doing, and even when things go horribly wrong she still manages to save the day. I wouldn't be surprised if she gets the park up and running again in time for Jurassic World 2 . She's that good.

That's right, she's seen dinosaurs and she's not impressed. Seriously, how badass of a person do you have to be to not be content with resurrecting the most impressive beasts the planet has ever seen? I'll tell you how much: Bryce Dallas Howard-level badass.

4. Being An Action Movie Queen

5. Rising To The Challenge

Let's not forget that it was Claire who had the insane idea to open the T-Rex paddock and let out the King of the Dinosaurs. Really? Letting out a T-Rex and literally having her chase you? Surely Bryce Dallas Howard must be crazy... crazy like a badass fox.

Her Help character may not have been the nicest, but she sure wasn't afraid of saying exactly what she felt.

7. Being Totally Cool About Her Celebrity Doppleganger

Believe it or not, there are some people out there who can't tell the difference between Bryce Dallas Howard and Jessica Chastain. I get it, they do look a little alike... OK, a lot alike, but Howard can stand on her own and doesn't need to compared to anyone. But enough from me, I'll just let Howard tell you herself.

She looks terrified, but stand her ground. That's strength.

That takes courage, to say the least.

Seriously, isn't she the best?