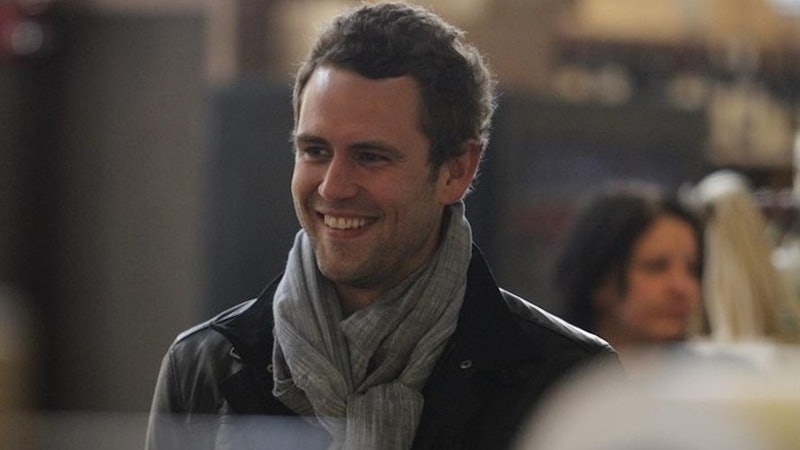 If you're anything like me, you've been watching Nick Viall play The Bachelorette game (and play it well!) with the other gentleman vying for Kaitlyn's heart. For two seasons, The Bachelorette series contender has been working it on TV like it's his job — and it go me thinking, what is Nick Viall's job in the real world? At this point in time, he could list "professional dater" on his LinkedIn profile and it really wouldn't surprise anyone. (Nick does give really good breakup tips, after all.) Under experience he'd be able to list not one, but two seasons of reality TV, and his soft skills could include wooing, wining, dining, and getting down. Heck, under education he could even list The School of Hard Knocks (hello Andi!). OK, maybe that wouldn't win him any job interviews, but it would funny.

I'll admit when I started digging around about this, I was just expecting his listed career to be something super vague like "professional MC" or "nightclub enthusiast" maybe even just a blanket "entrepreneur." To my surprise, he actually has a pretty legitimate job when the camera aren't rolling. It turns out that our Nick is an Account Executive at Salesforce, which is a company dedicated to helping other businesses grow quickly. He doesn't talk about it much on the show (I could see why, software jargon doesn't strike me as hot must-see-TV), but you can see the Salesforce URL on the "about me" portion of his Twitter profile. When he's not tweeting about the show, his body, or his thoughts on life — he will throw in these Salesforce business updates:

So, what exactly is an Account Executive? Basically, according to the company themselves, it's someone who develops and manages relationships with Salesforce customers, presents on new functionalities, and generally builds business. I'm sure that's a gross over-simplification, but I think we can all agree that it's way less interesting than "professional reality show contestant," although slightly more acceptable for everyday life. I highly doubt this software giant ever had their employees write love songs set to mariachi music.

But, what does this fancy job mean for Nick's future? Only time will tell if he wins this season, and (even if he does win) if he and Kaitlyn will stay together through the break between seasons. Or, perhaps the stars will align, and he will be chosen for the next season of The Bachelor. Either way, I don't see his Salesforce career getting in the way. My guess is he would drop that in a hot second to continue his TV streak. Or, maybe he'll get lucky and his job will let him take another few months off to film. Hey, they've already done it twice before!