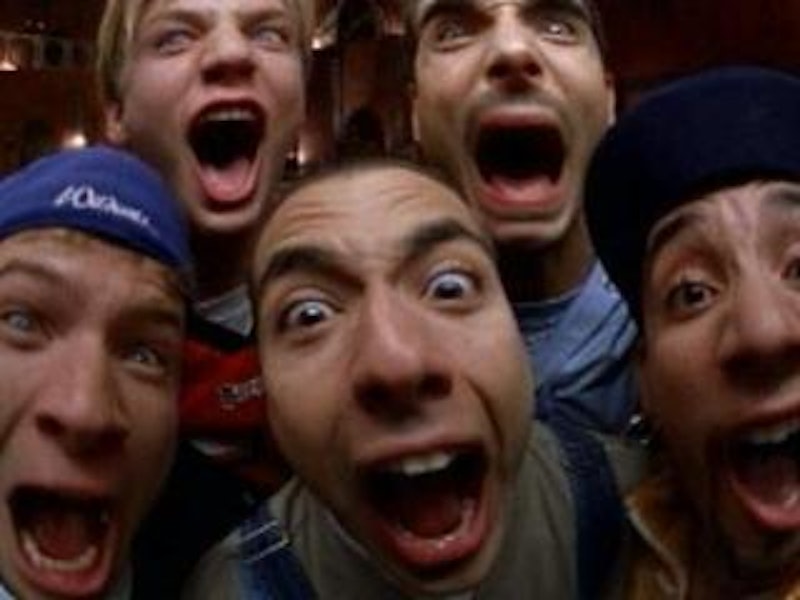 It seems like it was only yesterday when I was enjoying my 500th listen to The Backstreet Boys' smash hit, "Everybody (Backstreet's Back)." In reality, that song didn't come out yesterday, but in 1997 and OH MY GAWD, now I feel really old. My fleeting youth aside, the hit single remains a regular fixture on many of our respective iTunes, and the music video for said track was almost better than the song itself.

For the "Everybody" video, BSB decided to go the cinematic route by releasing a six-minute video for the song that showed our favorite quintet spending a night in a creepy haunted mansion after their tour bus breaks down. You probably remember that the horror-themed video showcased each BSB member as a different type of monster, that the video was interspersed with staple BSB dance moves, and that Nick Carter's bowl cut was particularly on fleek. However, in my recent re-watching of the music video (sidebar: research doesn't get much better than this), I noticed a myriad of iconic moments I had completely forgotten about. Apparently Howie Dorough — or Howie D, as he was oft known — did a celebratory vampire dance, the mansion had a serious rodent problem, and Kevin Richardson was cool as a cucumber after turning into a scaly monster.

The aforementioned are only a few of the squee-worthy things I noticed. Without further adieu, let's take a trip down a road marked "nostalgia," and look at 13 moments from "Everybody (Backstreet's Back)" that you probably forgot about.

The video opens with all of BSB basically losing it over their bus breaking down and potentially missing their next concert. During their cacophonous complaints, the bus driver instructs the boys to quit their moaning and basically CHILL THE FRICK OUT.

2. BSB Stopped Being Monsters During The Main Dance Breaks

It doesn't take long for each member of BSB to morph into a grisly creature of some sort — so why do they all look 100 percent human during the ballroom dance sequence? Then again, the dance moves are so enjoyable, you don't really care about the plot hole.

Surrounded by cobwebs and taxidermy, it's not surprising that Littrell was caught making the stank face.

Even though we were led to initially believe the creepy haunted house was abandoned, apparently someone was running the place — or at least the PR side of things — as evidenced by this "Ballroom Dance" announcement posted on the gate.

5. This Woman Who Thought Dorough Was Finger-Lickin' Good

This woman was really excited for Dorough to emerge from that coffin.

6. The House Had A Serious Rodent Problem

As AJ McLean sings amid a vast spread of food, he doesn't even seem to notice the GIANT MOUSE PROBLEM going on right in front of his face. It's a good thing he was too busy singing to eat any of that tainted buffet.

7. Richardson Was Totally Nonchalant About Turning Into A Monster

He couldn't have been more chill. Then again, Richardson was always the group's strong, silent type IMHO.

8. Littrell Singing Through These Gargantuan Fangs

9. Dorough Was Stoked To Turn Into A Vampire

He even busted out into a celebratory dance when first emerging from the coffin.

Bloodthirsty Dorough showed his commitment to the music by stopping himself mid-bit to sing "yeah" along with the other members of BSB.

11. Littrell Did A Bunch Of Flips

After transforming into a werewolf, Littrell started to literally flip out. He flipped through the lobby, across the halls, and even past Richardson at one point. See?

12. These Bats Flying Out Of Dorough's Jacket

At the end of the video, each BSB member regroups in a normal state, wearing the same attire from the beginning. They each exchange stories of the "trippy" dreams they had the previous night, leading us to believe the whole musical event had only played out in their minds. BUT WAIT! Just as the boys are about to exit, the exasperated bus driver from the beginning returns with lacerations on his face and a steering wheel (I guess it fell off??), and his voice takes on a demonic cadence as he smiles maniacally and says, "Let's go." Cue every member of BSB screaming.

Do you feel properly reacquainted with this epic music video? If not, enjoy re-watching "Everybody (Backstreet's Back)" below. Heck, just watch it regardless — I know I'm about to. Nostalgia #FTW — amiright??