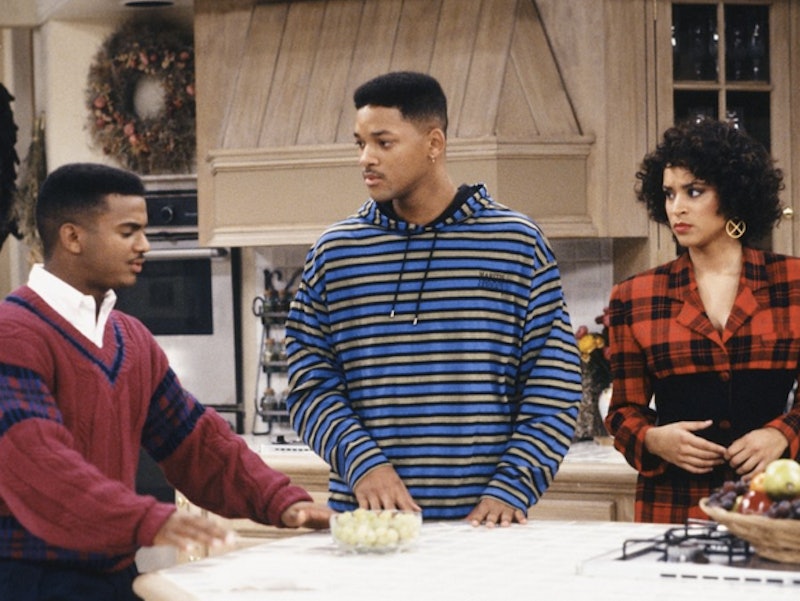 The other day, I was walking around and saw a group of middle schoolers rocking those stretchy "tattoo" chokers — you know the ones I'm talking about — and it truly felt like the '90s were back. Over the past year or so, it seems the '90s kid nostalgia has reached an all-time high and references to DeLiA's catalog style and old favorite shows have popping up a lot in pop culture. In particular, there's been a lot of nostalgia for '90s TV shows. Alfonso Ribeiro offered solid proof of that when he did the Carlton Dance on Dancing With the Stars and fans went wild. The Fresh Prince of Bel-Air undoubtedly had a big impact on the lives of people who watched the show when it was on air. Case in point, if you were a fan, you can and will recite that theme song on demand, anytime and anyplace.

I am pretty much always in the mood to revisit Will Smith and the Banks family, so I thought it'd be fun to reimagine some aspects of my favorite childhood show. Since I am a Miami girl born and bred, I wonder what it would be like if The Fresh Prince of Bel-Air took place in my hometown. I have been to Los Angeles before and have only driven by Bel-Air, but I can say that based on what I know about culture in South Florida as a native, the Fresh Prince would have been quite different — and a lot more Latin.

Carlton's Style Would Still Be Preppy, But With A Twist

Carlton Banks would still rock his trademark country club digs, but being in Miami, he'd have to add a little more "day out on the yacht" aesthetic to his style. I'm talking khaki shorts, flip-flops, fisherman glasses hanging from his neck, and a pink polo shirt.

Pitbull is known as Mr. 305 and the king of hip-hop from Miami. I could see him and Will might having some sort of rivalry.

The Banks Family Would Live In Coral Gables

Coral Gables is one of the oldest and richest parts of the city so it'd be a great fit for the Banks family, but they could also have a home on Star Island and be neighbors with Julio Iglesias, because that's so Miami.

The Theme Song Would Be A Certain Other Will Smith Classic...

Let's be real, when you think of Will Smith outside of Fresh Prince, there's a song that is almost as iconic as the show's theme song: Smith's 1998 single "Miami." Bienvenidos a Miami.

Those oversized blazers and massive hats that Hilary was known for definitely wouldn't cut it in the Miami heat and humidity, so Hilary would have to dress a little more for the climate with some maxi dresses, sandals, and very little clothing otherwise. I have a feeling Hilary wouldn't mind showing more skin, anyway.

The "Carlton Dance" Would Have A Little More Salsa To It

Sure, Carlton doesn't skimp on his hip swaying while dancing along to "It's Not Unusual," but if you grow up in Miami, you learn a salsa move or two by proxy. Plus, the song he dances to might be by Gloria Estefan instead of Tom Jones.

If a Fresh Prince reboot ever happens, they should definitely consider a location change!