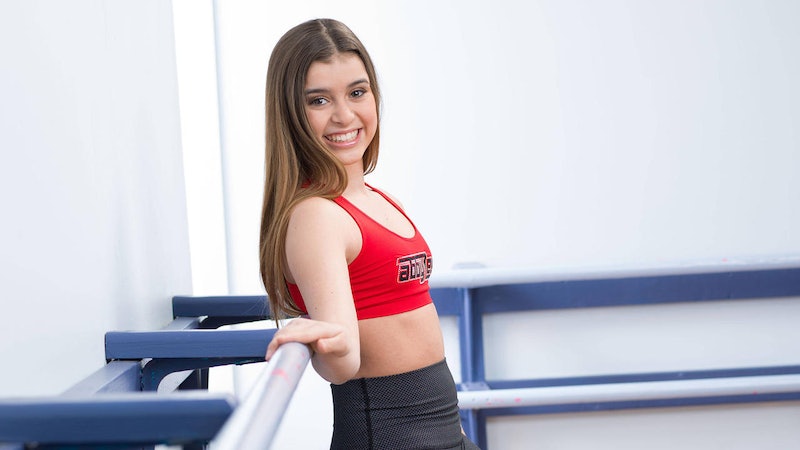 Fans of Abby Lee Dance Company star Kalani Hilliker of Dance Moms had a slight scare when her mom Kira and Abby Lee Miller got in a fight recently, but all is well since Kalani asked her mom to let her continue to be a part of the ALDC. Now that she is here to stay, it's time to get to know Dance Moms' Kalani off the show. I consider Kalani to be the best dancer on Dance Moms after Maddie, but since she just joined the team in Season 4, Abby Lee doesn't have as strong of a relationship with Kalani and her mom Kira as with the girls who have been as part of the ALDC for longer. And, as a result, fans don't know her that well either.

Clearly, the 14-year-old is devoted to dance and her Dance Moms team since she was the one that convinced her mom to let her stay on the ALDC. Yet her dance career didn't start (nor will it end) on Dance Moms. Kalani has been dancing since she was two years old and prefers the styles of contemporary and lyrical, which is definitely shown in her dancing. But, besides being a great performer, here are six other things you need to know about Kalani.

1. She Knew Abby Before Dance Moms

She was part of the cast of Abby's Ultimate Dance Company with her mom Kira, along with JoJo and Jessalynn. And, Kalani was one of my favorite performers on the show and made it to the final episode of Season 2 before being eliminated.

2. She Wants To Be A Professional Dancer

Obviously any girl on Dance Moms wants to pursue some sort of entertainment and dance career, but Kira has made it clear on Dance Moms recently that Kalani wants to strictly be a dancer — not a pop star — unlike some of her fellow dancers. And, I think she has the chops to join a dance company (other than the ALDC) when she is older.

The dancer moved from her home state of Arizona to Pennsylvania for Dance Moms, and now to California for the show. Her mom owned a dance studio in Arizona, but thinks Los Angeles is the place for her to be if she wants to keep following her dream of being a famous dancer. (Or maybe New York City...)

She's on national television, so it makes sense she's got a strong social media following. Plus, she's adorable and awesome, so that helps.

Kalani, along with her dancer friend Addy, have a vlog together, which they update with silly videos almost weekly. She gets to show her less intense side in their fun videos.

6. She Has Her Own Dance Wear Collection

The company Purple Pixies has their "Kalani Collection" of comfortable dance wear for tweens, and she modeled the styles for their website. Did you have your own clothing line at 14? There go those Dance Moms girls showing us all up again. But, Kalani is so sweet about it that I don't even mind. And, I can't wait to see her progress as she continues to train at the ALDC.