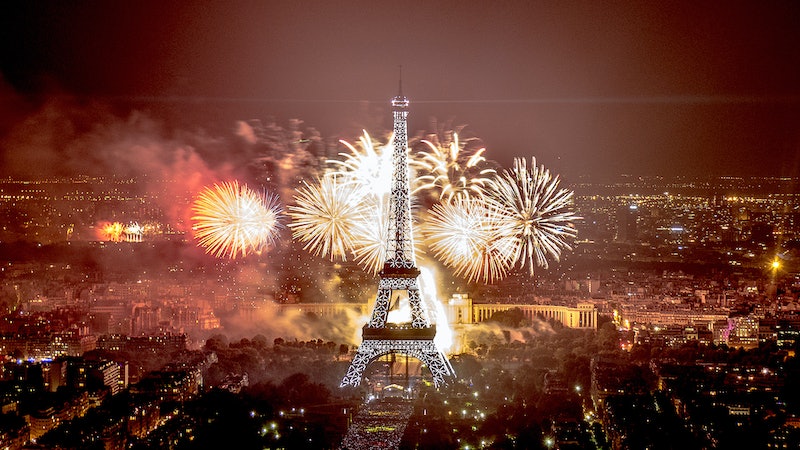 July 14 is French National Day, or as most English-speaking countries know it, Bastille Day. If you aren't lucky enough to be spending your summer days lounging by the French Riviera or your summer nights cafe-hopping in the City of Lights, than you might feel like your missing out on the celebrations. But fear not, because there is another way to visit France this holiday: through books, of course!

From the Fitzgeralds to the Hemingways, from Gertrude Stein to Ezra Pound, authors and artists have long professed their love for France. It's a place where the city lights are brighter, the sunshine warmer, and the waters bluer than anywhere else. It's a place where, one day, you can be studying art at the Louvre and snapping pictures of the Eiffel Tower in Paris, and the next, be enchanted by a quiet seaside village that looks untouched by time or progress. France os a magical world filled with inspiration, romance, mystery, and self-exploration, and what better way of honoring the hard-fought battles of the French Revolution than honoring all of the things that make France the remarkable, incomparable place that it is? Whether you love France for its city life, busy cafes, and outstanding shopping, or you're more interested in the Bohemian art scene that seems to be permanently preserved there, you can be whisked away to another time and place entirely through a good book.

Who needs fireworks over the Eiffel Tower when you have a novel by your side, am I right? In honor of Bastille Day, here are 13 books that will transport you to France:

No literary trip to France would be complete without the help of Ernest Hemingway's classic memoir of 1920s Paris. Page after page A Moveable Feast is filled with literary legends, unstoppable artistic creativity, and, of course, wining and dining. Enchanting and unforgettable, leave your world behind and travel instead to Hemingway's Parisian streets, where art, romance, and wine reign supreme.

The Paris Wife by Paula McLain

Can't get enough of Hemingway's France? Try seeing it through the eyes of his first wife and one true love, Hadley Richardson, in the fictional account of their years together in Paris. Fascinating as it is heartbreaking, The Paris Wife is a whirlwind ride of late-night drinking and wild partying alongside the likes of Ezra Pound and Gertruid Stein. Even the greatest lovers, Hemingway and Richardson, couldn't make it through — do you think you have what it takes? Read it and find out.

Tender is the Night by F. Scott Fitzgerald

From the mind of another professional expatriate, there are few American novels that capture the beauty and wonder of France better than F. Scott Fitzgerald's Tender is the Night . Set along the sun-kissed banks of the French Riviera, this tragic romance will sweep you away in a wave of champagne, movie stars, and killer jazz music. What more do you need to celebrate Bastille Day than that?

Traverse the streets of an unknown Paris in Russ Rymer's mystery-thriller Paris Twilight. The city itself becomes a character when Matilde, an American professor visiting Paris for work, mysteriously inherits a Parisian apartment and a bundle of love letters from a stranger. As she tries to unravel the secrets that are piling up around her, Matilde (and readers) travel across space and time, through long-forgotten wars and current conflicts, to a side of Paris few get to see and experience.

The Iron King by Maurice Druon

Sure, you've heard of George R. R. Martin's Iron Throne, but have you read the series that inspired his best-selling books? Bastille Day is the perfect excuse to pick up the first in Accursed Kings seven-volume series. Set in 1314 during the rule of Philip IV, The Iron King brings medieval France to life using historical figures and events to drive the family drama, political corruption, and page-turning intrigue in this action-packed novel. Though the events take place centuries before the French Revolution, The Iron King will transport you to France, where you'll feel like you're walking — or running — for your life through the countryside, up and down castle halls, and in the village squares.

Sit back, relax, and make sure you grab a box of bonbons before cracking open Joanne Harris' delectable novel-turned-film Chocolat. When newcomer Vianne Rocher shows up in the fictional southwestern French village of Lansquenet, nothing will ever be the same again. There is something magical, some say maybe sinful, about the power Vianne and her confections have over the villagers, and it becomes an all-out war of good versus evil, or in this case, chocolate versus the Church. Whether you're in it for the mouthwatering descriptions of chocolate or for your true love of the magic of sleepy French village life, Chocolat can only make your Bastille Day sweeter.

Lessons in French by Hilary Reyl

Be prepared to be seduced by young, rich bachelors, eligible, intelligent scholars, and, of course, the irresistible city streets of Paris, France, in Hilary Reyl's Lessons in French. After graduating from Yale, Kate has decided to spend the summer working as an assistant to a prestigious American photographer in Paris, and quickly finds herself awed and a bit overwhelmed by the lavish lifestyles of those around her. While she tries to navigate a city she once called home, Kate must also figure out who she is before the France swallows her whole.

Settle into your reading chair, the one underneath the reprint of Monet's "Water Lily Pond," and let Stephanie Cowell's art-driven historical romance paint you a picture of a France that can only exist in art. Claude & Camille is a breathtaking portrait of Claude Monet and his wife, lover, and muse, Camille, as they dealt with financial struggles, rejection, and emotional torment that would eventually ignite the now-famous painter's career. A masterpiece of the heart, Cowell's retelling of the 19th century love story will make you feel like you're sitting for a portrait at the famed Japanese footbridge or the poppy fields of Argenteuil.

Murder on the Eiffel Tower by Claude Izner

See the the City of Lights come to life in the pages of Claude Isner's historical murder mystery. Set 100 years after the storming of the Bastille, Murder on the Eiffel Tower takes you the the bustling streets of Paris during the 1889 World Fair where woman has just mysteriously collapsed and died on Paris's brand new pride and joy, the Eiffel Tower. Victor Legris, a young Parisian bookseller, is determined to find out the truth about this seemingly sinister occurrence, and in order to find out what really happened, he must travel through main streets and back allies of Paris, all the while captivating readers with an stunning portrayal of 19th century France.

What better way to transport yourself to another place entirely than through food and writing? In Julia Child's unforgettable memoir My Life in France, readers are taken on a journey of the senses through local markets, culinary classes, and of course dinner parties hosted by the master chef herself during her early years in France. Be warned: You will be hungry after reading, so make sure you have some macarons on hand.

The House I Loved by Tatiana de Rosnay

From the best-selling French author Tatiana de Rosnay comes The House I Loved, a story of one woman's strength and resistance during one of the most tumultuous times in French history. As she watches her neighborhood fall into ruin per order of Emperor Napoleon III, Rose refuses to give up her home for the sake of "modern progress." Instead, she bunkers down in her home's basement reliving the past while writing letters to her late husband, and in the process, professes her love for a city whose whole identity is threatened by change. The House I Loved is perfect for anyone whose heart belongs to Paris.