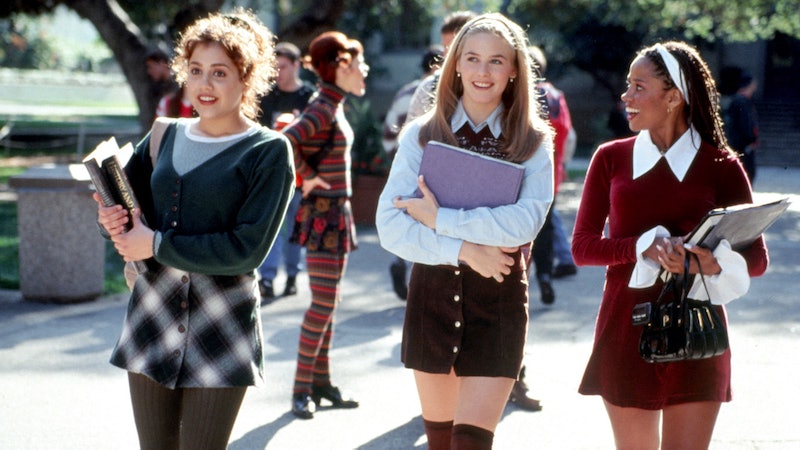 Clueless, the seminal film for many a Gen-Y or millennial, is now 20 years old. In other words, Clueless is now old enough to have possibly graduated from college. If Cher Horowitz were an actual, real-life human woman (to which I have hope that she’s out there… somewhere), she’d be 36, definitely married, probably with kids who go to school with North West and the Garner-Affleck kids. And while her fashion may have changed over the years, I think mommy Cher in 2015 would be just as sage as teenage Cher — after all, she did give out some really great advice in the movie.

For those of you who haven’t seen Clueless, I assume that you just have never had electricity your whole life or something, but here’s the gist: It’s loosely based on the Jane Austen novel Emma. Spoiled (Ithink!) rich girl Cher Horowitz and her friends run Bronson Alcott High School. They live in Beverly Hills, they wear the best designers, and they are obviously the popular kids. When new girl Tai Fraser shows up, Cher feels compelled to give Tai a makeover, and in doing so and taking Tai under her wing, she learns quite a bit about herself. The presumed to be shallow Cher actually has some pretty deep insights. Here are my favorite knowledge bombs from Cher Horowitz:

Clothes Make The Man (Or Woman)

Cher is a total clotheshorse because she knows the way you look can totally affect the way you feel. Tai felt sexier and more confident after Cher’s magical touch, and even Ms. Geist was able to chat up Mr. Hall with a few minor tweaks to her look. Is Cher an appearance-driven person? Kind of, but it’s only because she knows how important it is to be the total package.

There’s No Need To Be A Snob

Elton and Cher seem like they are a meant-to-be teenage power couple, but she is so turned off when Elton responds, “Do you know who my father is?” to Cher’s assertion that Elton should be dating Tai. Why? Because Cher doesn’t think that Elton is better than Tai, and Elton is a “snob-and-a-half” just for saying it. Cher would treat the Queen of England the same as she’d treat Lucy, her housekeeper.

Standards Should Be High

Cher is notoriously picky about her suitors, and why shouldn’t she be? She’s got plenty going on for herself, and she shouldn’t waste her hot, independent self on a Barney. We should all know our worth and keep our standards high to match.

There’s A Time & Place For Matching

Clothes should match (and Cher has a handy computer program to help her sort through her massive closet), but people don’t necessarily have to. By the end of the movie, Cher learns that it’s better to complement people than to be the same as them. That’s why she pairs so well with Josh.

Sometimes It’s Nice To Do Things For Other People

Though Josh says “he’d die of shock” if Cher did anything nice for anyone else, Cher knows how great it is to help someone else out. She makes over Tai, she hooks up Mr. Hall and Ms. Geist, and she takes over the Pismo Beach Relief Drive without a thought as to what she can get out of it. I’d argue that Cher’s self-worth went up with all of her philanthropy.

Half Of Cooking Is Just Trying

According to Cher, it’s nice to have something baking when a guy comes over, because it shows your domestic aptitude. While I don’t know about that part, Cher shows an important part of cooking — just doing it. Even if you mess it up, you tried, and you can do better next time. It really takes the mystery out of the culinary arts.

Fake It ‘Til You Make It

Don’t know who Billie Holliday is? You’ll figure it out. Unsure if people who lost their homes need skis, too? Just bring ‘em. Going through the motions of something is actually useful when it comes to doing.

Paying Attention In English Can Come In Handy…

…Especially when trying to one-up snotty know-it-alls. Josh’s beret-clad girlfriend thought she was smart in trying to quote Hamlet, but she attributed a line to the wrong character and Cher totally stood her up. Sometimes, one line is all you need.

When Cher gets crappy grades the first time she gets her report card, she doesn’t grin and bear it. She cajoles and convinces her teachers that she was going through a thing until they raise her grades. I mean, it’s where I got the phrase “surfing the crimson wave,” and boy, has it come in handy.

It’s Important To Have A Happy Place

Surfers have the beach. Students have the library. Cher is a shopper, and shoppers have the mall. Cher does her part watching the Galleria, and for good reason — it’s where she can relax, and it’s certainly where she gets all of her best ideas.

“How We Met” Relationship Stories Can Get Weird

I mean, Josh is Cher’s ex-stepbrother. I think they should just say they met through friends. Today, they would say they met online.