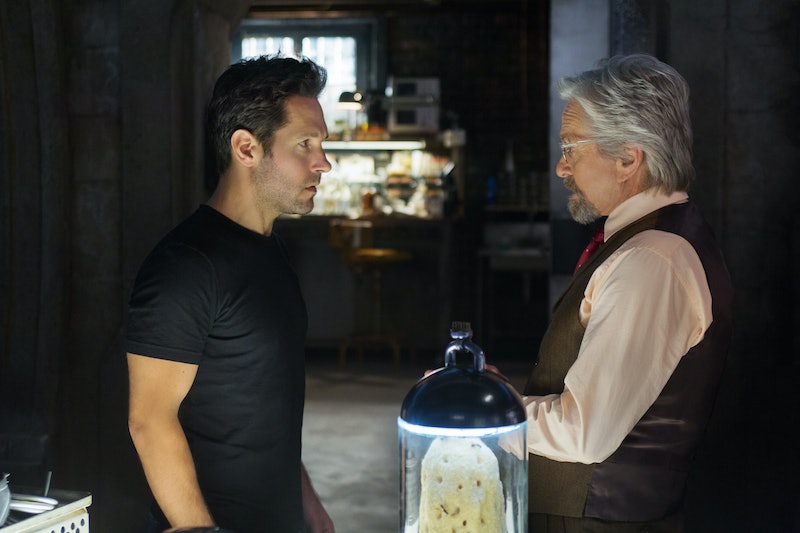 In Ant-Man, Marvel's newest release, the titular superhero played by Paul Rudd has some impressive abilities — and a lot of dangerous work to do with said abilities. One of his powers is the ability to adopt a sub-microscopic size and enter the subatomic universe. But there is inherent danger to entering a subatomic state in such a manner, and so our superhero has to decide if it's worth it to take this risk in order to save the day. Well, that's all good and dandy, but what is a subatomic state? In order to understand the danger that Ant-Man is truly in, viewers first have to learn what the terminology really means.

In the movie, the process is described to Ant-Man as "going between the molecules." He is told by Hank Pym (Michael Douglas) that by entering a subatomic state, he may lose track of time and reality and just keep shrinking forever, with no way to get out. So, that's the inherent, and significant, danger of a subatomic state. Get it? No? OK, let's take a look at the premise a little more objectively. Here's what to know about the subatomic state:

It Literally Means Under The Atoms

"Sub" is a prefix derived from Latin and means "below" or "under." "Atomic" means having to do with atoms. "State" in this instance means a condition or given circumstances. So a subatomic state is a condition of being below atoms. Since atoms are the most basic unit of matter, anything "below" them would therefore be smaller than the smallest measurable unit of matter. That is to say: really, really small.

The subatomic particles which make up atoms are measures of energy, not matter, so by the time something becomes that small it has ceased to exist on a tangible level. Now, since it's known that matter can't be destroyed, the concept of a human shrinking to subatomic size is obviously impossible. But in the hypothetical situation put forth in Ant-Man , going into a subatomic state would be dangerous because it would essentially mean abandoning your bodily form and entering oblivion. The problem in the movie isn't how Ant-Man is going to get to a subatomic state; it's how he's going to get back.

It's Been Seen In Movies Before... Kinda

Still confused? Think of it this way; it's a little reminiscent of the scene in Willy Wonka and the Chocolate Factory where Mike Teavee is broken down into particles by the Chocolate Television camera — remember that? The difference here is that the party in question is the protagonist, not a little brat-faced kid, and so viewers are more concerned about whether or not he is going to materialize back to his original state.To summarize: subatomic state = smaller than an atom = no longer a concrete physical being = dangerous.

Does that make more sense? No? Well, I tried. Maybe you should give Paul Rudd a call and ask him to explain. Or you could just give Ant-Man another view, but that wouldn't be nearly as fun as calling up Ant-Man himself.