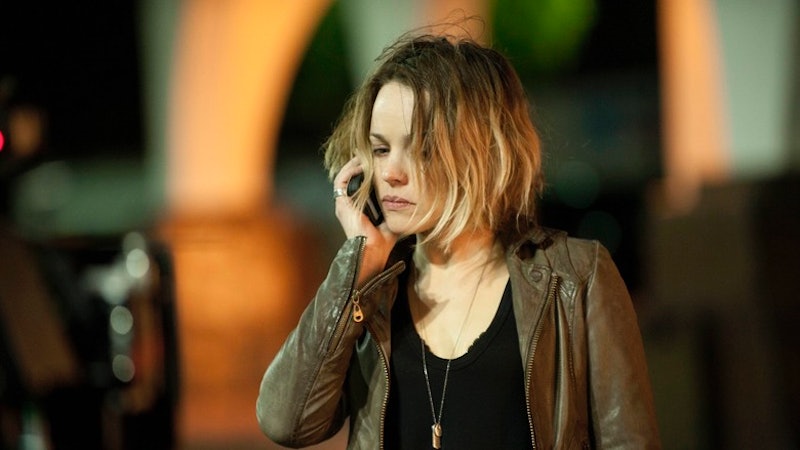 Admittedly, I wasn't entirely convinced that True Detective Season 1 deserved the seemingly endless praise it was given for quite a long time. It was, for all intents and purposes, a very slow-moving series with a questionable payoff, and it took some distance and reflection from it to fully appreciate its merit. So when Season 2 was announced, this time with the likes of Rachel McAdams, Vince Vaughn, Taylor Kitsch, and Colin Farrell at the helm, I was intrigued and hopeful that this time around, there'd be a more immediate reward in terms of storytelling. Now, halfway through the season, I've given up on that idea and I'm even beginning to lose hope that it can even live up to Season 1 at all.

It's not that True Detective isn't trying — it very clearly is. It's got all the mood and nuance you'd expect from a murder mystery, with lots of lingering shots in dank and depressing locales, actors giving sidelong and tortured glances as they are off into an unseen distance. But this is sort of the problem. Character development is key if viewers are meant to care about what's happening on screen, but the age-old concept of showing rather than telling seems to have been ignored with this series, and the seemingly endless stream of dialogue that has filled the first four episodes of Season 2 has done little to illustrate who these people are or why that even matters.

Each of the show's four main characters — Ani Bezzerides, Ray Velcoro, Paul Woodrugh, and Frank Seymon —have their own cross to bear and carry around a deep-seated angst and unrest that's meant to hint at some deeper trauma they've yet to come to terms with. A few episodes back, Vaughn as Frank made a lengthy monologue while lying in bed about some childhood slight that was so boring, I can't even remember the contents. McAdams' Ani has never dealt with her cult leader father and Kitsch's Woodrugh has similarly avoided his true sexuality. Velcoro is working both sides of the law and has plenty of unresolved anger issues (and a drinking problem, to boot). But what does it all mean in the grand scheme of things, and do fans really have to wait until the season finale to find out?

The problem is that a character's backstory is meant to make the audience understand that character better, to empathize and understand their motives and the baggage they carry in the present, and how that baggage informs the decisions they make. Instead, the facts viewers have received about our four leads this season has been incomplete and without context, making it hard to even remember once the scene has past, let alone care about. Instead, fans watch them meander about their days, half-heartedly attempting to solve a crime that seems to matter even less than the characters' backstories.

A dodgy guy named Ben Caspere is murdered and a bunch of people in animal masks are involved — that's the central focus of the season. But if our biggest reason to care is the fact that Frank lost a bunch of money he'd recently handed over to the now dead man, I'm not quite sure what kind of big reveal could possibly be in store, and if the show's writers actually expect us to be moved by it when it happens, given how little impetus fans have to do so even now.

I do get what True Detective is going for. It's about ambiance, and in many ways, style over substance. It's a practice in slow burn, but creating that dynamic is a fine art that not everyone can master, and that this series seems to be on the verge of failing on. It's one thing to create mood to convey a theme, but entirely another when every part of your script is to aid that mood rather than the storyline. There's half a season left, which means there's still time to turn this whole thing around. Unlike last week's random shootout in which (rather unbelievably) pretty much every single person was shot and murdered besides our leads, viewers need a little less conversation and a lot more action — and hopefully, action that will mean something.