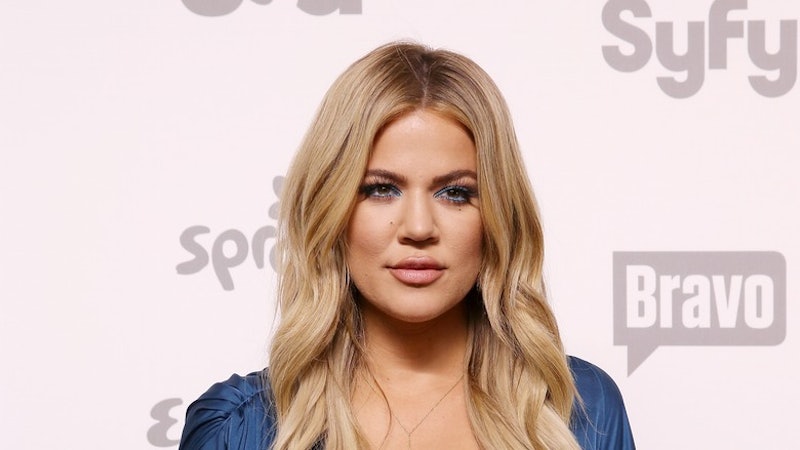 Admit it: You've probably seen an episode or two of Keeping Up With the Kardashians. Maybe you follow the show religiously or, perhaps you only caught a glimpse when channel surfing. Either way, there's no shame in following this famous family. (Even Ed Sheeran enjoys it!) In just seeing a small amount of the show, a person can tell that Khloe Kardashian is the most fun-loving and outspoken of the sisters, not to mention an awesome aunt to all of her nieces and nephews. There are so many episodes of her goofing off with little Mason Disick, and over the weekend, Khloe Kardashian shared videos from babysitting North West and Penelope Disick that will make your soul explode from the cuteness. (Unless you have no soul, in which case I don't know what to tell you.)

In the black-and-white Instagram video, Penelope and North (aka the cutest cousins of all time) appear to be excitedly blabbering incoherently. But if you watch it a few times and read the caption, then you'll realize they're apparently singing, "like a diamond in the sky" from that Rihanna song "Diamonds." The vid is so adorable that even the most serious people (ahem, Kanye West) are bound to smile from watching. See for yourself:

Khloe shared a few other fun photos from her babysitting adventure, including North and P staring at a cartoon on TV and a giggling selfie with the girls. They're clearly having the best time. Here's a list of reasons that Khloe Kardashian not only makes a fantastic babysitter, but an awesome aunt. That new Kardashian-West baby on-the-way is surely in for a treat when he hangs with Auntie KoKo!

On any of those KUWTK episodes where the whole family goes on vacation, Khloe is always hanging with her younger sisters and up for whatever new adventures they are.

She's A Kid At Heart

Just last month Khloe turned 31, but that doesn't mean she's too old to watch cartoons with her nieces. You've never too old for that.

Her Maternal Instincts Are On Point

She practically helped raise her sisters Kendall and Kylie Jenner. The two look up to her like a mom, as illustrated by Kylie's Instagram caption from a Mother's Day post, above. The teen wrote,

thank you for being you & being another mother figure to me my whole life and doing the same for our nieces and nephews. Whoever, one day, gets to have you for a mom will be the luckiest in the world.

She's Not Afraid To Speak Up

Hopefully she keeps her signature snark in check around her nieces and nephews for now, since they're influential toddlers. But in the future, they'll know they can go to KoKo for honest advice.

It's clear that Khloe cares about her family and puts them above all else. What better proof that she makes an amazing aunt?!

North, Mason, and Penelope have many family members to hang out with, but Auntie Koko seems like a favorite, and it's clear why.