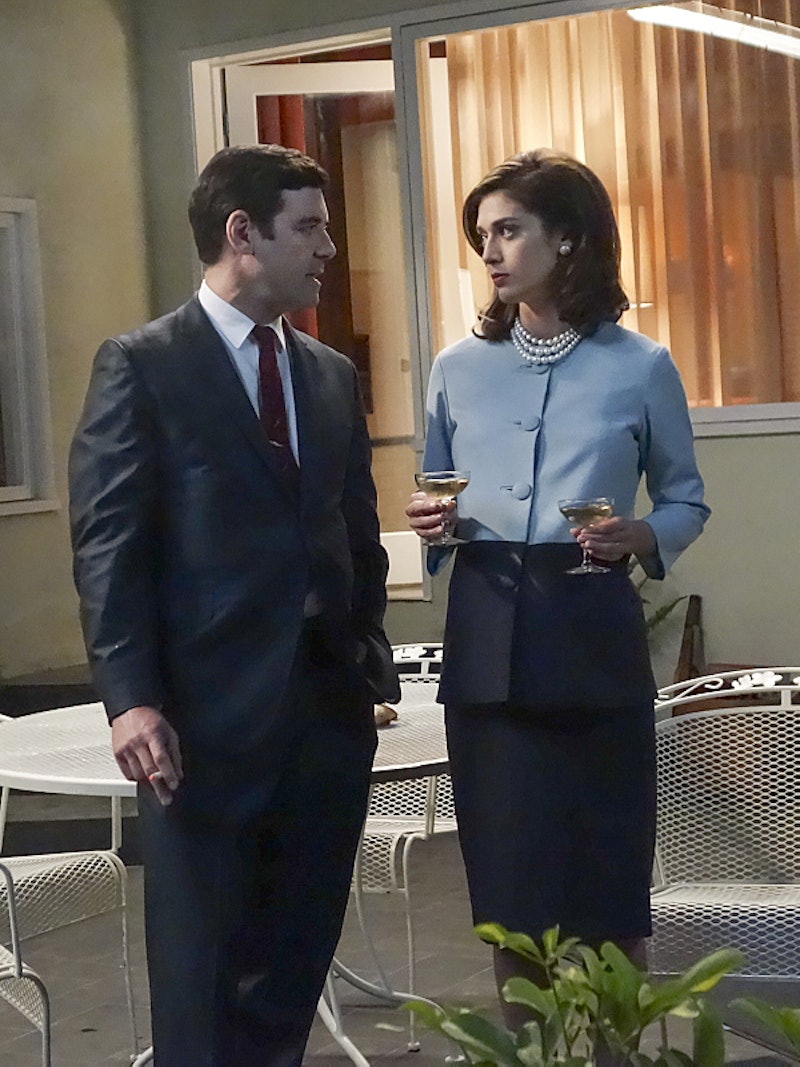 On last week's episode of Masters of Sex , Bill told a reporter, "Whatever the arrangement between grown, consenting adults must begin with the truth." The truth between the consenting adults, that is. He never said a word about whether the outside world deserves to know it. This week, Bill aids and abets Virginia in securing a marriage of convenience with her ex-husband George. The baby we found out about in the premiere? The researcher decided to keep it. And, while Masters & Johnson may be a vital cog in the sexual revolution, an unmarried pregnant woman is still bound to set "tongues wagging" in 1965.

Both of the women in Bill Masters's life know that he's shooting blanks. So, while everyone is sure that Bill isn't the father of Virginia's baby, they're equally sure that anyone with half an imagination will believe that he is. "Everyone" here includes Libby, Tessa, and even Bill himself. Virginia knows it too, though she's loath to admit it. And suddenly, George seems to be the solution to everyone's problems. If he's willing to make an honest woman of his ex, Bill gets his partner back (sorry, Dr. Welsh — your services are no longer needed) and Libby's family unit looks less unstable to the new neighbors. Once the arrangement is in place, Libby even lets her hopes run away with her, day-dreaming aloud to Virginia that she and George will fall back in love for real. That way, she can retain her dear (and only) friend, without having to ignore that friend regularly sleeping with her husband.

Nothing looks less likely than that scenario as George and Virginia say their vows with Bill and Libby serving as their witnesses. The scene is intercut with the Johnsons and their lawyer, who's going over the very un-romantic terms of their agreement. Everyone looks miserable, aside from poor, hopeful Libby: George, who still loves Virginia, has already been shut down on that front; Bill, who also loves Virginia, knows that he's pushed her to do this; and Virginia, who encourages brutal honesty to her patients at all times, is setting herself up to lie to a child for its entire life. It's a massively depressing sequence.

For as forward-thinking as Virginia is in her work life, she allows herself to be influenced in her personal life. And after that final scene in her birthing room, I think I know why. Confident in every other facet of herself, Virginia is terrified that she is not only a bad mother, but has never had the capacity to be anything but. Bill passionately talks her out of that hole, suggesting that lifeless women who've been stripped of their individuality are, perhaps, not the best caretakers for children. "You are leading the way in so much, Virginia. Why not this too?"

Let's be real: George is, objectively, a better man than Bill. But Bill knows Virginia, and knows what she needs to hear. George resents Virginia for not being the girl he married; Bill sees her for all of her potential. Again: everyone is miserable. (New Masters of Sex tagline?)

Anyway: no arrangement can survive with emotions running this high. Even with the legal hoo-ha behind it, George and Virginia's marriage is balancing on very shaky ground.