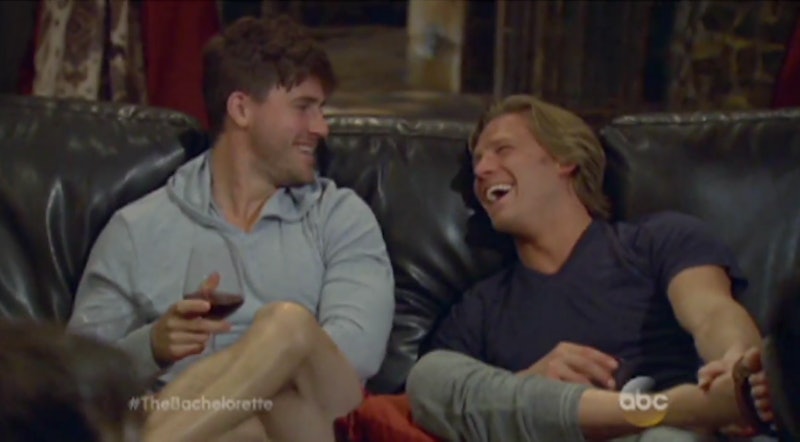 If you've been watching the show at all this season, you're probably very aware of the love story/trainwreck that is Bachelorette contestants JJ Lane and Clint Arlis. While most of the guys went on the show to capture Kaitlyn Bristowe's heart, JJ and Clint ended up finding themselves in a close friendship that resulted in one of the most problematic Bachelorette promos ever. At first, they were inseparable, constantly talking about how much their newfound relationship meant to them and generally making the rest of the guys in the Bach mansion as uncomfortable by their closeness as possible. But it didn't take very long for the whole thing to implode, with Clint getting tossed off the show and JJ left to deal with the wreckage in his wake. Obviously, on Monday night's Men Tell All special, this whole ordeal will be rehashed, so who was actually right in this situation?

If my description of the situation sounds dramatic, that's because it is. In the history of The Bachelor and its many varied spinoffs, there have been so many emotional face-offs, but none has been like what went down when JJ crossed Clint. To refresh your memory, everything was going well between the two, until Clint started giving off the vibe that he wasn't actually interested in Kaitlyn and instead wanted to hang around as long as possible so he could keep bonding with JJ. Obviously, the other guys in the house picked up on this, filled Kaitlyn in, and she ended up questioning his motives in front of the rest of the men, effectively prompting JJ to sell his BFF down the river.

Because, you know, JJ was so pseudo-horrified at Clint's actions that he demanded an apology from him to everyone on the show for wasting their time without even blinking an eye. Screw their formerly sacred bond and all that — JJ was clearly there to win Kaitlyn's affections, and the only way to do that was to throw Clint under the bus despite the fact that he was given the opportunity to either shut up or actually defend his friend, but chose to do neither.

The fight that resulted was basically terrifying, seeing as Clint is pretty damn scary when he's mad and JJ had a complete meltdown when Clint refused to accept his apologies literally minutes after he made Clint look like an ass in front of everyone.

It's hard to say which of the men was right when it came to their fight, since both of them have been very wrong for so many different reasons. Clint was wrong to attempt to stick around for JJ and not Kaitlyn, because Kaitlyn clearly took the whole process very seriously and it was heartbreaking to her to have to make the decision to send someone home. Wasting her time, like JJ said, is not OK. But JJ's also in the wrong for not standing up for his friend. It's impossible to take sides in a situation like this, so I guess we'll just have to wait and see what happens on Monday night.

Being that Instagram shows the two getting along a little better after Men Tell All was filmed, I have a feeling that their confrontation on the show will be super healing. Will they put all the drama behind them? Fingers crossed — if for no other reason than that means the rest of us can put this whole situation behind us, too.