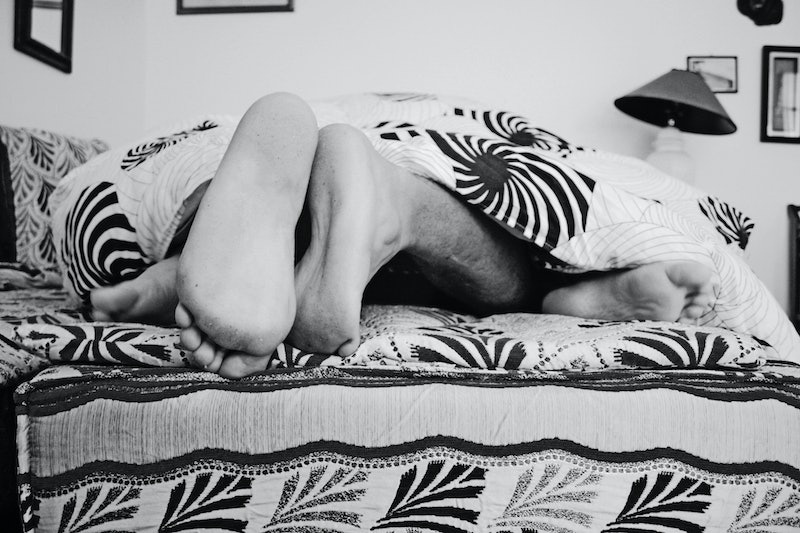 We’re always hearing that we could be having better sex, a better orgasm, or a better relationship. But how often do we hear the nitty-gritty of how we can actually better understand our deepest desires and most embarrassing questions? Bustle has enlisted Vanessa Marin, a sex therapist, to help us out with the details. No gender, sexual orientation, or question is off limits, and all questions remain anonymous. Now, onto today’s topic: what to do when your boyfriend comes more quickly than you.

Q: My boyfriend orgasms pretty quickly during sex. I’m barely starting to get into it, when all of a sudden, it’s over. We’ve never talked about it openly, so I’m not sure how to approach him. I feel like there’s something wrong with me for taking so long to get there. How can I make myself orgasm faster? I would like for us to orgasm at the same time.

A: Thanks for your question! Orgasms can be awfully finicky for men and women alike. Trying to control the timing for one person is hard enough, but with two people it can feel near-impossible. Here are six tricks for what to do when your partner orgasms faster than you.

I understand that you’re feeling like you’re the “slow” one, but we could just as easily say that your boyfriend is orgasming “too fast." Instead of making timing judgments on either of you, let’s just talk about the reality that the average man takes three to five minutes to orgasm, while the average woman takes about 20. The vast majority of straight women are in the same sort of predicament you’re in.

2. Get Him To Help Support Your Orgasm

Unfortunately, a lot of guys out there focus solely on their orgasms and don’t check in about their partners’. If you and your boyfriend have never talked about your orgasmic timing before, it’s possible that he doesn’t realize that you’d like sex to last longer. He may have had girlfriends in the past who liked fast sex. Or maybe you’ve been faking orgasm, and he thinks everything is fine as is. He might be fully aware that he’s orgasming quickly, but too embarrassed to talk about it with you. Or there’s a possibility that he’s being a selfish or inconsiderate lover. I don’t know him, so I can’t make that judgment!

If he’s generally a thoughtful person, give him the benefit of the doubt and talk to him about drawing out your sexual experiences. Of course, this can be a sensitive topic. I think it’s best to start off speaking in broad terms. Say something like, “I’ve been reading up on how to improve my orgasms. Would you be up for trying some new stuff with me?” Then suggest one of the techniques listed below. There’s a tricky line to walk here; you don’t want to blame it on him, but you also don’t want to reinforce the notion that something is “wrong” with you. Try to think of this as a joint issue for the two of you to work on together.

If he balks at or ignores your requests, it’s a pretty good sign that he doesn’t possess the generosity or consideration necessary to be a great sexual partner. We can all be sensitive to getting sexual feedback, but someone who is unwilling to make changes isn’t someone you want to be with in the long-term.

So now let’s talk about some specific strategies to try in the moment. If intercourse tends to go quickly for him, one of the best ways to increase the likelihood of you having an orgasm is to spend more time on all the good stuff before intercourse. Foreplay is a lot of fun, so this shouldn’t feel like a chore!

The next time you guys are hooking up, tell him, “Let’s take our time. I love it when we do that.” Spend a while just making out. Ask him to touch you all over your body, and touch him all over his. Take your clothes off slowly. Ask him to tease you and hold out on you until you’re practically begging him to have sex with you. The closer you are to orgasm before you start having intercourse, the faster you’ll be able to get there once it begins.

4. Break Up Intercourse With Other Activities

Another great way to prolong the fun is to take little breaks from intercourse. If he’s going full steam ahead, he’s bound to orgasm quickly, so breaks give him a chance to cool down. Ask your boyfriend to tease you more, by getting you to the edge of orgasm, then stopping for a few moments before starting up again. Have him pull out, then finger you, go down on you, or use a toy on you. You can tease him too! Try taking the lead the next time you have sex, and stop when you can sense him getting close.

I know that you want to orgasm at the same time, but it’s just not a very useful goal to pursue. For as often as they’re shown on TV and in the movies, simultaneous orgasms are very rare in real life. Trying to orgasm at the same time sucks a lot of the fun out of sex. One person is always trying to slow down, and the other person is always trying to speed up. What you end up with are two people that are more focused on timing than on connecting with each other. Simultaneous orgasms can be fun when they happen naturally, but you’ll be so much happier if you can stop making them your goal.

6. Be More Open About When You Orgasm

If you’re not going to push for simultaneous orgasm, you have to be more flexible about when each of you has your orgasm. There are so many fun ways to play around here, so try mixing it up! Let him know that you’d like to try having your orgasm first sometimes. You can make it feel like a sexy game by saying something like, “How about tonight we don’t allow you to orgasm until you’ve gotten me off first?” Other times you can tell him, “Tonight it’s all about you.”

I know that this can be a sensitive topic to address, but please don’t let that deter you from sticking up for your needs. It’s important to have a partner that supports your pleasure and is invested in making sure you have a good time. For more resources, check out these positions for helping guys last longer, and my guide for men, The Modern Man's Guide To Conquering Performance Pressure.