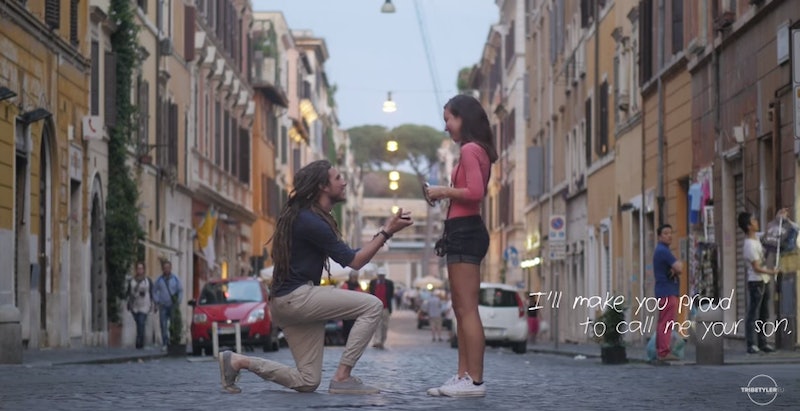 It's wedding season and we've all seen our fair share of proposal videos (like the guy who surprised his girlfriend in London to propose, or the bride who helped her cousin get engaged at her wedding). In fact, it seems like every day, people are constantly thinking of new, creative, adorable ways to pop the question — not that I'm complaining about that, mind you. Today, a new proposal has gone viral, though it's probably not for the reasons you think: Tyler Shelton's "Not Your Average Proposal" video has been racking up views, but not because it has any big gimmicks or crazy effects. In my opinion, that's why people are going so crazy over it — because it's so honest and sincere.

Tyler Shelton, the mastermind behind TribeTyler, a video blog where Shelton documents every single day of his 20s, has been with his now-fiancee Haylee for over seven years. Tyler had always envisioned asking Haylee's dad for her hand in marriage, but sadly, he passed away in April of 2014. So Tyler did the next best thing: he asked all of Haylee's siblings if they would give their blessing, and then documented it all on video. As you can imagine, they all gave a resounding yes (otherwise we probably wouldn't be obsessing over the video).

But the sweetest part that will bring you to tears is the beginning of the video — you see, it's addressed as a letter to Greg, Haylee's late dad.

Here's Haylee and her dad.

That last bit is going to say "daughter," by the way.

The big day has finally arrived...

And he ends the proposal with a promise:

Here's the ring, by the way:

Beautiful. I love everything about this.

Honestly, my screenshots didn't really do this video justice, so you need to watch the whole thing. Check it out below — athough you might want to grab a box of tissues first: