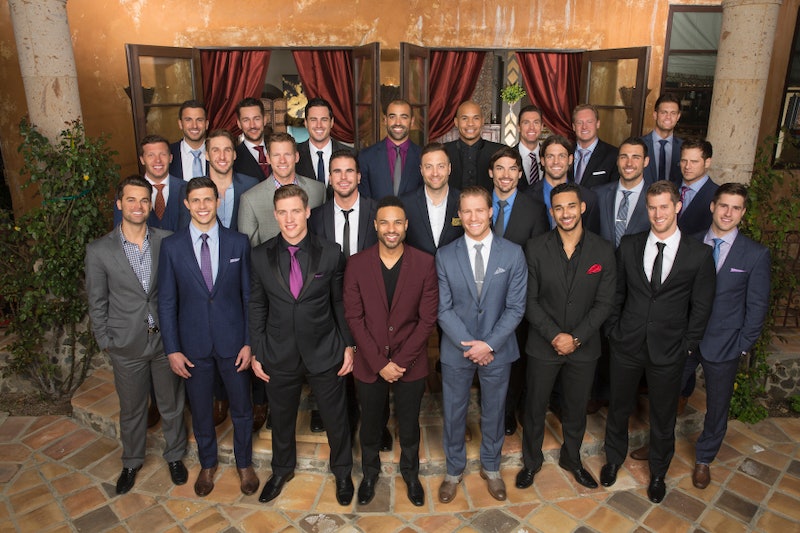 Arguably the best episode of the entire season, The Bachelorette : The Men Tell All will air Monday when all of the men from Kaitlyn’s season of The Bachelorette reconvene and talk drama, sumo-wrestling, and Ian’s awfulness. And I simply can’t wait. There are a lot of questions that need to be answered at The Men Tell All that I’m crossing my fingers Chris Harrison will address. If he doesn’t address any of the following questions, I’m going to feel as cheated as being the dumped contestant on a 2-on-1 date… no fun.

The final two men — Nick and Shawn — won’t be present at the special, but the ex-suitors of Kaitlyn’s will all sit together and probably yell at each other about being there for the right reasons and it’s going to get dramatic. Dare I say, this could be the most dramatic episode of The Bachelorette we’ve ever seen. There are certain things that should be addressed for the sake of our sanity (Question 1), and then there are other questions that need to be answered because Kaitlyn deserves an explanation (I’m looking at you Ian). Here are the top nine questions for The Bachelorette: The Men Tell All episode.

1) Who Is The Next Bachelor?

You’re probably thinking, “No s—t, Sherlock.” This isn’t necessarily a question as much as it is a confirmation. Something tells me we’re going to have to wait longer than The Men Tell All (think After The Final Rose) to hear those sweet words that Ben H. is (probably) the next Bachelor.

That’s the real question this summer, since Reality Steve and other news outlets have been reporting back and forth information of the outcome of the season. Let’s hope Chris Harrison charms us with a tease of whether Kaitlyn is with one of the guys or not at the end of the season.

3) Cupcake Chris, Is There Anything Wrong With Him?

Because I don’t believe it. He came off as a cookie-cutter (oops, sorry. Wrong baked good reference) bachelor, so what’s his human flaw? Does he have really gnarly toe nails? Maybe he has a bad habit of swallowing his gum? I need to know that perfection doesn’t exist!

4) How Does Clint Feel About Everything?

Is he embarrassed? Is he chill about it, because he’s so bro-y? Does he even remember Kaitlyn’s name?

JJ’s flip on Clint was the betrayal of the season (DUN. DUN. DUN.), so we need to know if these two worked through their issues and returned to being best friends. Also, Chris Harrison, please bring attention to JJ hitting himself to get his head in the game.

Because he should. He absolutely should.

7) Will Ian Even Show His Ivy League, Not Shallow At All, Face?

Because he should. He absolutely should. (Bye Ian.)

Jared told Kaitlyn immediately that he voted for Britt to be the Bachelorette, but he ended up developing major feelings for Kaitlyn. Although I didn’t root for him and Kaitlyn, I rooted for him.

9) How Fake — Sorry, Real — Was The Britt And Brady Relationship?

Britt and Brady are sure to get some screen time during The Men Tell All as the beanie wearing couple from Heaven, but I expect some major grilling. I don’t believe that these two were ever dating, call me a skeptic in love, but if they were, then what went wrong? They seemed “so happy” in the end-of-episode packages on Monday nights.

More like this
It’s Official: 'The Bachelorette' Is No Longer A Fairy Tale
By Samantha Allen
Logan Might Change His Mind About Dating Rachel On 'The Bachelorette'
By Brad Witter
Former 'Bachelor' Producer Elan Gale Knows The Secret To Your Favorite Shows
By Samantha Rollins
'The Bachelorette’s Johnny Could Be Gabby's Dark Horse This Season
By Kadin Burnett
Get Even More From Bustle — Sign Up For The Newsletter