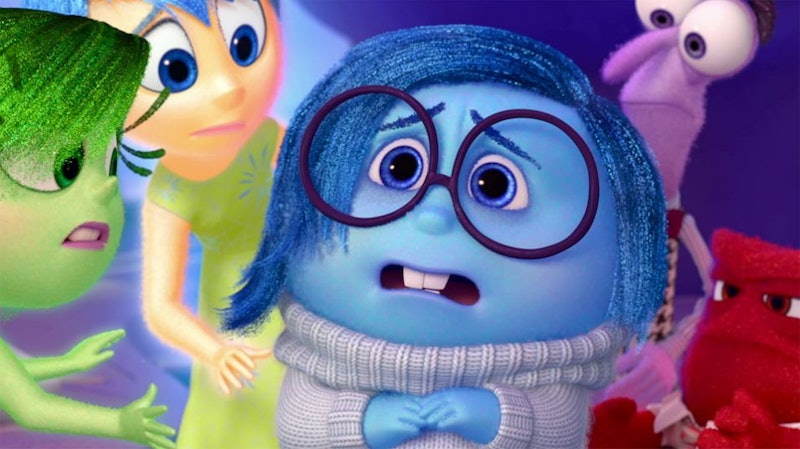 Unless you've let your inner fear keep you from leaving your home and accessing any sort of media over the past month, you've likely come to the realization that Disney and Pixar's Inside Out is an amazing movie. The film anthropomorphizes the five emotions (Joy, Sadness, Anger, Disgust, and Fear) living inside the mind of a young girl named Riley, and uses them to perfectly illustrate a number of experiences of the human condition. Things like growing up, going through difficult changes, and suffering loss are displayed with an intelligence and accuracy rarely seen in a movie. In other words, it's pretty heavy stuff for what's supposed to be a kid flick. But that's the type of creativity and big ideas fans of Pixar films have come to expect from the studio, along with lots of laughs, tons of tears, and of course, great lines — especially all those Inside Out quotes about sadness, which are bound to leave you a total, embarrassing mess.

It's OK, though, because everyone else will be in the exact same boat, even long after the movie is over. Because I'm a glutton for punishment, here are eight quotes from Inside Out that are sure to turn on your waterworks and make you feel like you're losing Bing Bong all over again. Seriously: Inside Out might just be the saddest Pixar movie yet, which is saying a lot considering this is the studio that gave us that ridiculous opening montage in Up. If you're ready (i.e. you have a box of tissues at hand), read on.

Just about everything out of Sadness's mouth is, well, sad, but I really can't help but feel for her here. She's just trying to be included and play a role in Riley's life like the other emotions by touching a memory, but none of them understand her and are constantly shutting her out. Eventually they call come to realize how critical Sadness is, but at this early point in the movie she's a straight-up tear factory.

OK, this quote, said when Joy introduces herself near the beginning of the film wasn't a sad scene per se, but the idea that it puts forth, that nothing lasts forever, hits me right in the feels and is a recurring theme throughout the movie. Why can't things just stay the same?!

3. "Crying Helps Me Slow Down And Obsess Over The Weight Of Life’s Problems"

And we're back to another Sadness quote. What can I say, she's a tragic character. And she's right, sometimes crying does help, but that doesn't mean I want to do it in a theater full of strangers. Apologies to row D, seat 6 at the AMC Santa Monica 7 Theater for blubbering all over you.

4. "It Was The Day The Prairie Dogs Lost The Big Playoff Game. Riley Missed The Winning Shot. She Felt Awful. She Wanted To Quit. Sorry, I Went Sad Again, Didn't I?"

Damn it, Sadness. You take a happy memory and just crap all over it! OK, it's not Sadness's fault that basically all of Riley's memories were full of darkness, that's just the way life is sometimes. All nostalgic happy memories are tinged with a bittersweet element, and this quote makes me think of my lost youth. That might sound a little dramatic, but come on, have you seen this movie?

5. "I Know You Don't Want Me To, But I Miss Home. I Miss Minnesota. You Need Me To Be Happy, But I Want My Old Friends, And My Hockey Team. I Wanna Go Home. Please Don't Be Mad"

Some of the film's most poignant moments came from the mouth of Riley rather than the voices inside her head. Riley explaining the reasons she isn't happy in San Francisco really hit home for anyone who moved as a kid, misses their old friends, or just straight up longs for their childhood. I feel you, Riley, because I am you.

Good lord, Bing Bong. If you didn't cry when Riley's imaginary friend accepted his fate as a forgotten remnant of her past and sacrificed himself for her benefit, then I firmly believe you to simply be an android masquerading as a human because humans feel, damn it! Seriously, Bing Bong's death was so sad that I started to write an email to the film's writers to ask why they had to tear my heart out like that, but my never ending stream of tears destroyed my computer.

I'll give you one guess which emotion is responsible for this uplifting line.

I'm with Anger here, Broccoli on pizza is a sin against humanity. Shame on you, San Francisco. Excuse me while I go drown my sorrows in some delicious cheese and pepperoni.

Why, Pixar, why? It's not just not fair to keep fans in tears all summer long.