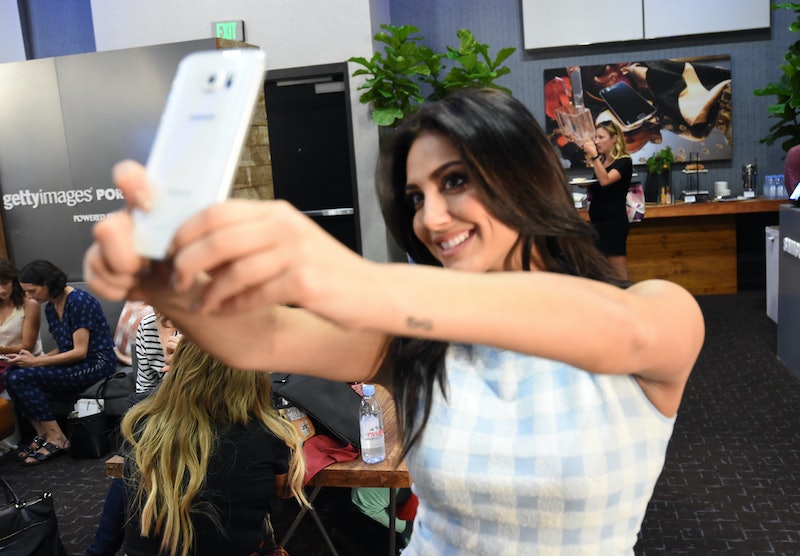 The selfie is having a cultural moment, and for better or for worse, we're going to have to talk about it. These unassuming, front-facing camera pictures are the subject of highly volatile and emotional debates, and unsurprisingly, have spawned studies that conclude that frequent selfie posters are narcissistic, Machiavellian, and psychopathic. But you know what? I'm not exceptionally concerned about it. Call me a product of the "me me me" generation (no, seriously, go for it), or call me a narcissistic, Machiavellian psychopath (I like that one better — do that instead), but I'll be honest: I don't totally buy these studies, or the earlier one that concluded that men who take selfies are more likely to be psychopathic than their non-selfie-ing counterparts.

The two studies — the one about men we heard about in January, and this more recent one, which focused on women — administered personality tests to over 1,200 individuals, the results of which were intended to reveal tendencies towards the "Dark Triad" personality traits and whether they correlated with the participants' selfie-posting habits. Now, the "Dark Triad," of course, is an unnecessarily scary sounding name, but it's fitting for the three traits it measures, all of which also have severely stigmatizing, negative names. The Dark Triad consists of psychopathy, or shallow emotional response; narcissism, or egotistical preoccupation with the self; and Machiavellianism, or the tendency to be manipulative and deceitful. The studies found correlations, of course — which doesn't necessarily mean that posting selfies doesn't make people more narcissistic or what have you; however, it might serve as an indicator of whether someone already is narcissistic (or Machiavellian or psychopathic).

So, if people who take a lot of selfies score higher on those scales, why am I not worried? Shouldn't I be concerned that my generation full of glib, uncaring, psychopaths? No, I shouldn't be. And neither should you.

First off, there has never been a single generation in history that hasn't expressed some kind of collective outrage over "kids these days." Somehow, the youth is always ruining everything. And while our parents stressed out our grandparents with their love of rock and roll and free love, we're doing it with duck faces and Snapchat. And we're going to be fine. Besides, most Millennial stereotypes are just that — stereotypes — and ones the myths of which are pretty easy to bust, at that.

I also question these studies because of their preoccupation with labels. If you're really interested in psychopathy, check out this TED talk by Jon Ronson or read his book, The Psychopath Test. By examining the various factors associated with psychopathy on the so-called "psychopath test," Ronson reaches a fascinating conclusion: We're all wont to demonstrate psychopathic tendencies. We're all sort of psychopaths. Who isn't sometimes manipulative or superficial? I mean, have you ever been through Sorority Rush, or tried to talk a friend into coming with you to an event with you, or made any sort of polite small-talk with a stranger? Is everyone a psychopath for not being truly authentic all the time? Hardly.

Of course, maybe I'm just a highly manipulative psychopath. I took this personality test, which measures your tendency towards the Dark Triad, to find out. The test features 27 statements, all of which you have to agree or disagree with in degrees (meaning you can "strongly disagree," "disagree," be "neutral," "agree," or "strongly agree.") Here are the statements:

Some of them are easier to answer than others. For example, I strongly agreed with, "I feel embarrassed if someone compliments me," but was more neutral on, "I like to use clever manipulation to get my way." I think some of that is because of the way the statements are phrased. Do I ever use "clever manipulation" to get my way? Absolutely. Maybe even more than I should. But do I like it? I don't know. That makes me sound a bit more like a strategic evil genius that I intend.

The study warns you against sharing your results with others, because apparently people get really heated about the whole Dark Triad thing, but I'm living on the edge (classic psychopathic behavior, I'm sure):

I wasn't sure if I was going to post my results the first time, so I thought maybe I didn't answer as truthfully as possible because I was trying not to come across like a manipulative psycho to all of you (indicative of me being unintentionally manipulative?) , so I decided to take the test a second time and be 100 percent honest. Here are those results:

So, I guess I'm not as narcissistic or psychopathic as most people who take this test, whatever that means. I am a bit more Machiavellian than most, which I feel pretty okay about. I guess my problem with these results is that I don't really know how to interpret them. Should I be happy? Should I be concerned?

I'm going to choose not to let them overly affect my life, because at the end of the day, I stand by the fact that we're all pretty narcissistic. Not to be overly clinical about it, but protecting yourself and looking out for your own best interests is biologically ingrained behavior: if you don't keep yourself alive, you can't reproduce. That doesn't mean we should all be cruel to one another — just that it's okay to admit that you try to bend the world to fit your needs and desires a bit. It's natural.

How strong is my Machiavellian game in this selfie?