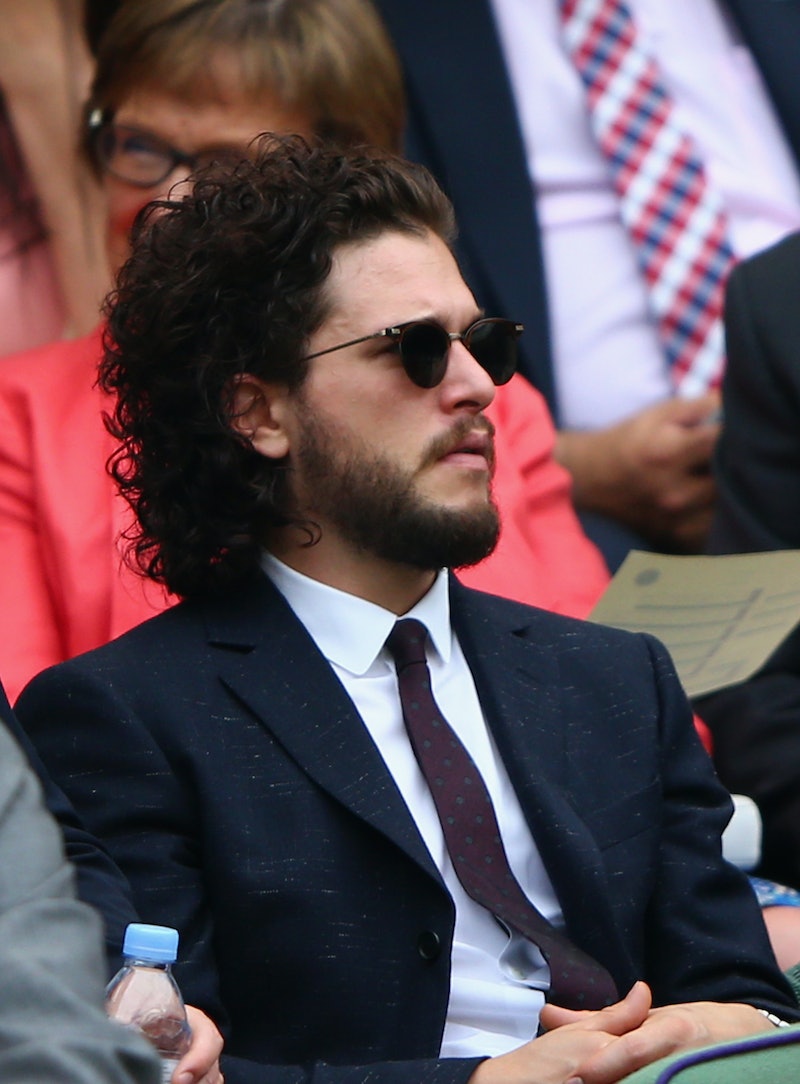 In general, I am in Kit Harington's corner, and personally, I feel like his life must be a nightmare now that Jon Snow died on Game Of Thrones. (OR DID HE?) I mean, I want to know as much as the next guy whether or not Jon is coming back to GoT, but I bet all Harington cares about at this point is getting a minute of privacy — something that has not happened since everyone and their mom seems to be following his every move to see if he's filming Season 6 of the show. Case-in-point: On Tuesday, Kit Harington was spotted in Belfast, where the cast and crew of the HBO show are reportedly filming — leading fans to speculate if this meant he was rejoining his buddies on the series.

I mean, I get it. I want to believe like Mulder, too. But let's not count our chickens before they warg into their direwolves and come back from the dead, yeah? Even though Harington WAS in Belfast on Tuesday (evidenced by photos in even The Daily Mail ), couldn't it be possible that the 28-year old British actor had other business to attend to in the city that just HAPPENED to coincide with the production schedule and location of his former employers?

As much as I want to see Jon back on the show, I stand by Harington, and I think he should be afforded the benefit of the doubt. Here's six things he could have been doing in Belfast, besides filming the sixth season of Game Of Thrones (which he was probably definitely doing, let's be real):

1. Getting His Hair Cut

Perhaps the only person that Harington trusts to style his mane is the GoT cast hairdresser, and now that he's off the show, he's having a hair crisis! Like — should he get rid of the man bun?! You can ONLY talk to your hairdresser about this kind of crossroads in life.

2. He Was There On A Romantic Mission

Now that Harington's out of a job, maybe he's just getting lonely. He's said before that he's a hopeless romantic, and he really loves to date his co-workers (for convenience's sake, not to mention the fact that all of his co-workers are babes). I like to think he was in Belfast to ask Emilia Clarke to be his bae, because I ship it.

3. He Was Working On Another Project

It's crazy to admit it, but Harington is NOT only Jon Snow. In fact, he is actually trying to have a career outside of Game Of Thrones: For instance, he was just in HBO's tennis mockumentary 7 Days In Hell, and he was REALLY good in it. It's possible that he was actually working on a different project in Belfast, and this timing was just unfortunate, setting off ALL the speculation. Take him seriously, he's not just the Lord Commander!

4. He Was Visiting The Titanic

Did you know that Belfast, Ireland is where the RMS Titanic was built? I didn't either, but maybe Harington knew. Maybe acting is his second passion, and the legendary history of the Ship Of Dreams is his one true passion, and he's always wanted to visit the Belfast Titanic Experience and go on the Shipyard Ride? WE DON'T KNOW HIS LIFE.

5. He Heard Belfast Was Beautiful This Time Of Year

It's a temperate 62 degrees! For a British person, this must be paradise. Maybe he just needed a summer vacay.

6. He Was There For Moral Support

Filming a show like GoT seems like a stressful, straining job, and Jon Snow's death must have felt like a real death for at least one cast member: John Bradley, who plays Samwell Tarly, Jon Snow's BFF. In an interview after Season 5, Bradley said that he felt "double whammy of grief" when Jon Snow died — so, maybe he called Harington crying in the night, saying he couldn't perform without his number one? I believe that Harington would fly to Bradley's side in an instant; he just seems like a good friend.

Of course, there's always the seventh and eighth possibilities: that Jon Snow is not dead, or that he is dead but is coming back. Just sayin'.

More like this
The ‘Love, Victor’ Showrunner Gave Fans Hope For A Possible Spinoff
By Brad Witter
Vanessa Hudgens Proves She's Always A Wildcat At This 'High School Musical' Location
By Alyssa Lapid
'Criminal Record' Is The 'Doctor Who' Reunion We’ve All Been Waiting For
By El Hunt
Regé-Jean Page Spoke Out On His Rumoured 'Bridgerton' Return
By El Hunt and Maxine Harrison
Get Even More From Bustle — Sign Up For The Newsletter