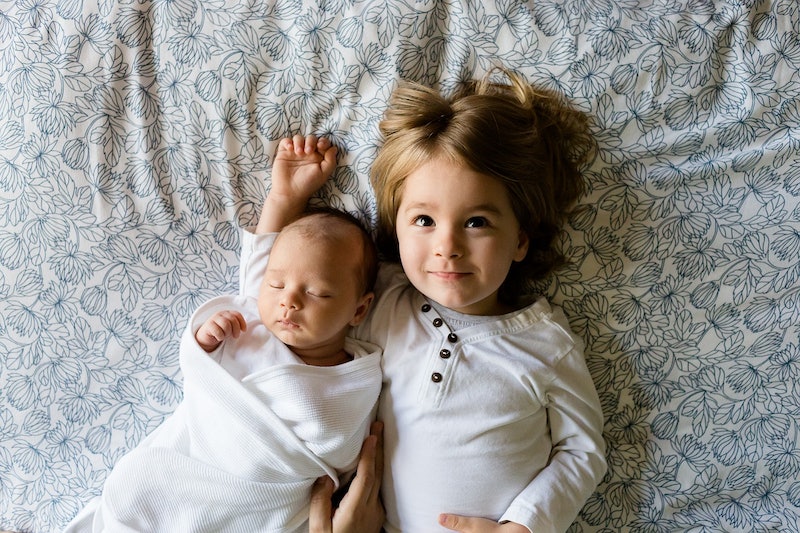 If you’re a feminist, giving your baby a feminist name can be a lovely way to commemorate people who have inspired you, and can give your new arrival an amazing role model. Although the list of feminist baby names naturally includes a lot of names traditionally given to women, that doesn’t mean that feminist names are reserved solely for baby girls. Little dudes can get in on the gender equality-loving action, too! Feminist names for baby boys might be slightly harder to come by than those for women, but that just means we get to be a bit creative.

There are a few different routes we can take with this. For example, we can celebrate the men throughout history who advocated and continue to advocate for women’s rights. Although, understandably, most famous women’s rights activists were women, we shouldn’t forget the awesome dudes who also stepped up to support women’s suffrage, education, and independence. Men like John Stuart Mill, Frederick Douglass, and others listed below fought for women's equality alongside history’s many suffragettes. Feminist baby-namers can also look for inspiration among fictional male characters who empower the women in their lives. (ILU 4EVER, Gilbert Blythe!)

And finally, who’s to say that you can’t name a baby boy after an amazing woman after all? I get that a lot of moms might be hesitant to give a name that’s almost exclusively used for girls to a son,* but there are lots of ways to celebrate a woman you admire without using a name that reads as overtly feminine. For example, I recently posted an article about great feminist names for girls. Many of these names could easily be converted to boys’ names. Like Sojourner! Seriously, can you imagine the awesomeness of a boy named “Sojourner”? Or what about using a last name as a first name, like “Woolf” (as in Virginia) or “Anthony” (as in Susan B.)? Or make some alterations: Use “Harry” to honor Harriet Tubman or “Emmett” to honor Emmeline Pankhurst. I’m telling you, friends, the possibilities are endless.

Here are some ideas to get you started:

Currer, Ellis, and Acton Bell were the pseudonyms used by the Brontë sisters (Charlotte, Emily, and Anne) when they published their novels and poetry in the 1840s and 50s. Charlotte Brontë is particularly famous for introducing the world to one of the most fascinating, complex women in literature: Jane Eyre. Emily Brontë is most famous for her wild, fascinating novel Wuthering Heights. Anne Brontë is less well-known than her incredibly famous sisters, but she shocked readers in the late 1840s with The Tenant of Wildfell Hall, in which she wrote explicitly about domestic abuse and the injustice of marriage laws that stripped women of their independence, ability to own property, and gain custody of their children .

After escaping from slavery in 1838, Frederick Douglass became a major force in the abolitionist movement and also openly supported women’s rights. At times, he was in conflict with women’s rights activists like Elizabeth Cady Stanton. (They disagreed about whether white women or black men should take precedence in the fight for suffrage. Yes, black women definitely got the shaft in this situation.) But he continued to support women’s suffrage throughout his life. In an 1888 speech for the International Council of Women, he said:

[Woman] is her own best representative. We can neither speak for her, nor vote for her, nor act for her, nor be responsible for her; and the thing for men to do in the premises is just to get out of her way and give her the fullest opportunity to exercise all the powers inherent in her individual personality, and allow her to do it as she herself shall elect to exercise them. Her right to be and to do is as full, complete and perfect as the right of any man on earth.

“George Eliot” was the pen name of Victorian novelist and essayist Mary Ann Evans, a master at portraying complex, psychologically realistic characters. (Also, have you read Middlemarch? It is wonderful. That is all.) “George Sand” was the pseudonym of French memoirist and novelist Amandine-Aurore-Lucile Dupin. Her novels feature independent, free-spirited women who attempt to shrug off conventional gender roles. Often considered a radical, Sand rejected traditional social mores about the proper roles of women and women’s sexuality. She was famous for wearing men’s clothing in public, and had a number of high-profile love affairs.

How can anyone not love Gilbert Blythe? He’s smart and kind, he loves Anne Shirley, and, most importantly, he respects her. He treats Anne as his intellectual equal, he supports her scholastic ambitions, and he even gives up his job at the local school so that she can stay close to Marilla. He never balks at her outspokenness or independence, but instead loves her for exactly who she is. Is it any wonder that, growing up, so many of us were sort of in love him?

Jeremy Bentham was a British philosopher, social reformer, and a founder of the ethical theory known as utilitarianism. Writing in the late 18th and early 19th centuries, Bentham supported suffrage for all people (including women) and the decriminalization of homosexuality (though his writing on this topic wouldn’t be published until long after his death).

John Stuart Mill was a Victorian philosopher and economist (and a follower of Jeremy Bentham, above) who actively supported women’s suffrage and access to education. In his most famous essay on women’s rights, “The Subjection of Women” (1869), Mill argued for marriage reform, improved education for women, and women’s suffrage. He also made the very salient point — still applicable today — that promoting equality of the sexes doesn’t just help women; rather, it improves the lot of humanity as a whole.

A baby named after Mill could be John, or Stuart, or both together. (I’ve just realized that the name could also reference Jon Stewart, and why not? The Daily Show has made some excellent feminist segments over the years.)

Marie-Jean-Antoine-Nicolas de Caritat, the Marquis de Condorcet, was an 18th-century French philosopher and mathematician who supported abolition and was an early advocate for women’s rights. Plus, he had about a hundred names, so you can really go crazy.

The eponymous character of Virginia Woolf’s gender-bending 1928 novel Orlando: A Biography, Orlando begins the story as a man, and then partway through transforms into a woman. Widely considered a feminist classic, Orlando is a thought-provoking exploration of the nature of gender.

Parker Pillsbury was a 19th-century American minister, abolitionist, and women’s rights advocate, who particularly pressed for the formal inclusion of women in the abolitionist cause.

Have I mentioned that I love “Sojourner”? It’s a gorgeous name, and Sojourner Truth was an amazing woman. Born into slavery, she would become a tireless abolitionist and advocate for women’s rights and suffrage.

Wendell Phillips was a 19th-century American abolitionist who was particularly well-known for his power as an orator. After the Civil War, he went on to advocate for universal suffrage and women’s rights.

William (Lloyd Garrison) (Really, any of his names would work as a first name)

William Lloyd Garrison was one of the most prominent abolitionists in the U.S. in the 19th century. He also advocated for women’s rights and for women’s inclusion in the abolitionist cause. In one famous episode in 1840, Garrison attended an international anti-slavery convention in London. When he learned that women had been entirely excluded from the proceedings, he refused to participate in the convention, and instead sat in the gallery with the ladies.