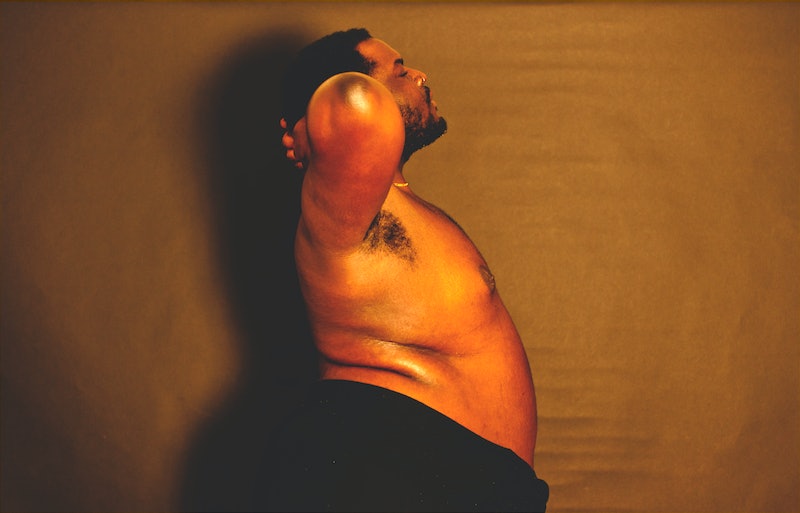 Growing up, I never saw any imagery of fat women who looked like me in the media I was consuming, so today it makes me happy to see so much increased visibility for ladies of all shapes and sizes. I can't help but thank the myriad of body positive photographers out there who work towards this visibility every day. Not to mention the plus size models who heat up Instagram with body positive photo shoots minute to minute, whose work also inarguably helps normalize the sight of fat bodies.

The notion that fat bodies exist shouldn't be a revolutionary one, but there are still people out there who think that those who do not fit into rigid societal beauty standards do not deserve to be publicly visible. Visual imagery that challenges what society would deem so-called "imperfections" is, thus, undoubtedly necessary.

Oftentimes, however, I see a lot of praise for the people in front of the camera. While models are certainly crucial to the body positive movement, we shouldn't forget to give some shine to the individuals behind the lens who dare to capture moments that make people uncomfortable. The work holds the purpose of trumping the way so many of us have been taught to interpret and judge beauty.

I have a few personal favorite photographers whose work I always hit quickly with the reblog button on Tumblr, but I wanted to see if there were any others who I didn't yet know. I asked my social media friends and followers and discovered these nine game-changing photographers who everyone should become familiar with.

Rochelle Brockington of Fatleopard Photography is one of my absolute favorite photographers. Not even 21 years old and still at student at FIT, Brockington has already worked with some of the industry's biggest names, such as model Essie Golden and the Pop Up Plus brand. Her work showcases bodies that look like hers — and that makes it feel all the more genuine and real for me. These photos of model @FatFemme are true art.

When I asked my social media friends who to include on this list, Andrew Thomas Clifton was the name I heard most often, which came as no surprise to me. I love how he showcases bodies of all sizes, including (without apology) non-hourglass figures that are not stretch mark free. You can follow him on any platform and you see that the visual impact of his work speaks for itself.

Photographer Samantha Figueroa was recommended to me by Cora Harrington of The Lingerie Addict, who I equally adore for being so body positive and inclusive. Harrington pointed me to the above photo by Figueroa and I was definitely sold. The more I looked, the more I realized that Figueroa had actually shot one of my favorite body positive lookbooks for the Diva Kurves Collection.

If you recognize Gomez's face, it may be because she's one of the star's of TLC's Big Sexy, or from her days as a plus size model in front of the camera when she worked for everyone from Saks Fifth Avenue to Monif C. But these days, Gomez is focused on her passion for photography, which always highlights plus size women.

Photographer Nonnie Ouchtaqalla was a new find for me, but based on the IG bio that reads, "Photographing the unrepresented, misrepresented & underrepresented," I knew that this account was going to be good. Scrolling the photos, I was not disappointed. I saw fat bodies from angles that you don't usually see and even posing while showing off pink armpit hair. I also saw work that is not just body inclusive, but LGBTQ inclusive as well.

One look through Saddi Khali's photos makes it clear that there is direct intention to challenge beauty standards, but in case the visual doesn't do it for you, he tags his photos with #decolonizingbeauty to make the message even more clear. Whether in black and white or color, there's a cohesiveness and clear style to all of Khali's photos that visually draws you in.

I was so impressed visually by the composition of Zoë Lapin's images, particularly the moments in which she captures drag queens. The photo above is part of a larger series called "the queen, 2014." On her website, she describes her own work by saying that she "provides an intimate narrative on beauty and femininity; beyond gender binaries," and that is exactly what makes her work so visually stunning and thought-provoking.

The power of this image really speaks for itself. There's something about Dominque's work that makes you unable to look away. Whether it's the angle of the body or the saturation of colors, the photos are probably like nothing you've ever seen before.

When I was first directed to the work of Pretty Puke, I was immediately uncomfortable. I realized quickly that such was the point, though. The captions gave me no insight into the photographer's thought process, but the more I scrolled, the more excited I became to see fat bodies being shown in the same strange ways as all of the other bodies shown on the page. A Google search told me that Pretty Puke is the most popular photographers of the moment, according to Complex. In an interview with the publication, Pretty Puke described the women in the images by saying, "A lot of the girls in my images are just strong, autonomous females that own their sexuality." That strength is exactly what comes across in the images.

More like this
What Is “Jello Skin”? The Latest Viral Trend To Know About
By Tomi Otekunrin
Fashion Trends From 2002 Making A Comeback
By Avery Matera
35 Dangerous Mistakes You Don't Realize You're Making In Your Home
By Claire Epting
40 Decorating Mistakes You Don't Realize You're Making Around Your Home
By Mackenzie Edwards
Get Even More From Bustle — Sign Up For The Newsletter