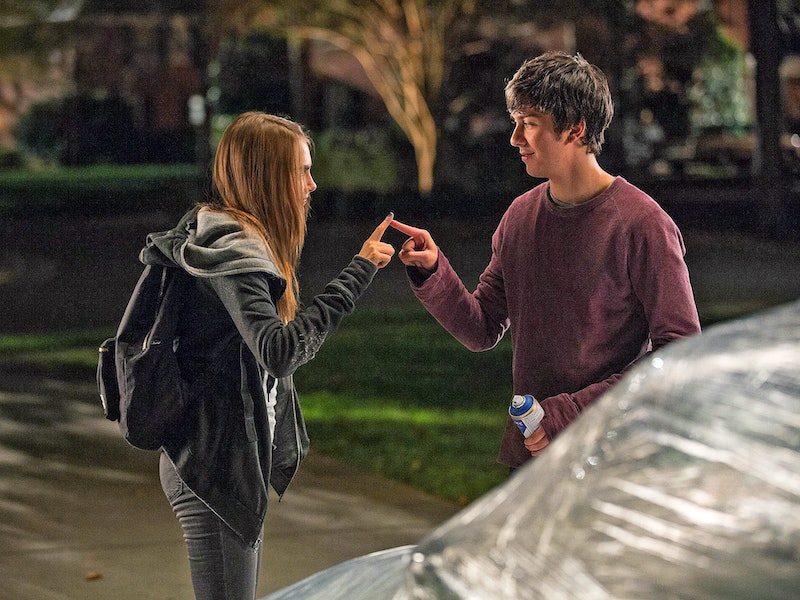 The Paper Towns soundtrack is a pretty amazing collection of music for either throwing a party or just having a good cry, depending on your mood. But unfortunately, whoever put together the official soundtrack really dropped the ball and left off the best tune used in Paper Towns — the Pokemon theme song. Yes, in case you haven't heard, the John Green adaptation features a scene where, spoiler alert, the characters sing the Pokemon theme song. It's funny and glorious and nostalgic and everything that it should be, and it's a real shame that it isn't on the soundtrack.

Interestingly enough, it almost wasn't in the movie, either. Director Jake Schreier told MTV that he initially envisioned the characters singing the Duck Tales (a woo woo) theme song in the scene, but was shocked to learn that the young cast had no clue as to what he was talking about (excuse me while I quietly move my things into a nursing home). Then either Halston Sage, who plays Lacey in the film, or Justin Smith, who portrays Radar (there's fierce debate over whose idea it actually was), suggested they instead sing the Pokemon theme song, and the whole cast burst into song as if on cue. This obvious love for the material made me realize that the characters of Paper Towns are basically Pokemon themselves. Such as:

Lacey may be a self-described "Charmander girl," but it's Q who shares the real similarities with the Pokemon. Like Q, Charmander appears to be a meek and unassuming individual, but possesses a fire inside that needs to be let out from time to time. Of course, Charmander's fire is literal, but you get the idea.

Mew is one of the most mysterious of all Pokemon. Rarely seen and possessing the ability to turn invisible, Mew has the same knack for disappearing as Margo.

Loyal no matter what, Pikachu will risk everything for its friends, regardless of how they've treated it—just like Lacey.

The comic relief of the Pokemon TV show, Meowth gets all the funny lines, just like Ben in Paper Towns, as evidenced by the film's trailer.

Uxie is known as the bringer of knowledge among Pokemon, kind of like how Radar is often the film's smart voice of reason.

Clearly, using the Pokemon theme was a good choice, because the Paper Towns characters totally fit in with the gang.