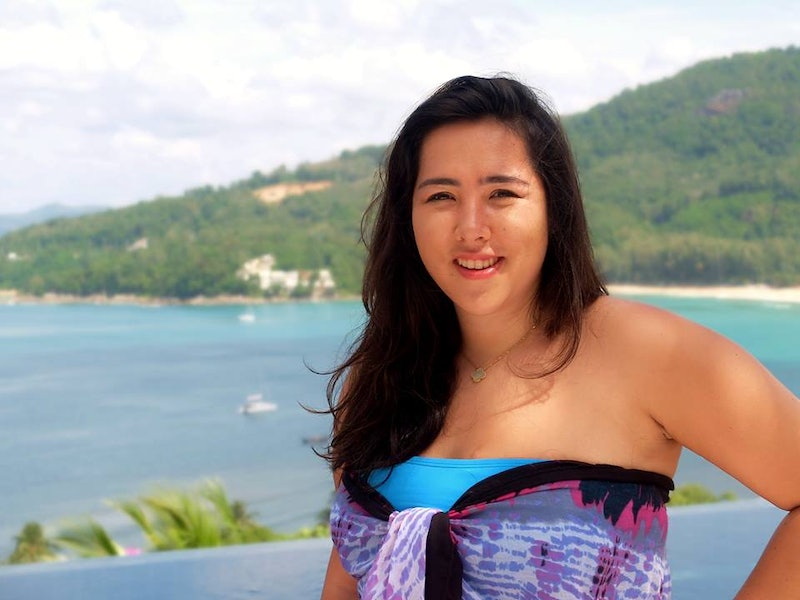 Considering how much negative messaging we get about our bodies in simple day-to-day life, and how constantly we're told that only a certain type of body is desirable or "bikini ready," it's awesome to hear about women like Michelle Elman and her #scarrednotscared campaign. Elman recently posted a bikini pic showing off her scars to Instagram and reminded us all what it means to be truly body positive — both with the image itself, and with her response to trolls trying to shame her for it.

Elman, a 21-year-old body confidence coach from London, has hydrocephalus, a condition which has resulted in scars on her body from 15 surgeries. Over the course of her life, she has also sustained complications that include a brain tumor, a punctured intestine, an obstructed bowel, and a brain cyst. Elman told Bustle via email that she didn't think there was anything to be ashamed about regarding her body or her scars until she got to middle school. It's an experience shared by many women, although Elman's health added an additional and extremely difficult layer to it:

When I first got my scars, I was quite young, so they didn't bother me until I wore a bikini for the first time and my friends noticed them. I got so upset I asked my parents for plastic surgery — I was 10 years old. As I got older, more problems started to arise in both changing rooms during PE lessons and in the dormitories as I went to a boarding school.

She also explained that she used to feel like she had to tread with caution when showing people her scars. "In the beginning of university," she wrote to Bustle, "I had my first experiences of trying to explain the scars to people. Initially I felt I had to 'warn' people, especially boys, before taking my top off, but over time, I became more comfortable with it." She also noted, "I've had days since then, especially when it came to boys, at one point referring to myself as a damaged handbag."

One day, though, Elman reached a turning point and realized that she didn't want to hide or scars, her body, or herself:

When I was 15 ... I was walking with a friend when we were walking past a door and she exclaimed, "F*ck I'm fat." It was in that moment that I decided I never wanted to be that girl. I didn't want to be the person who constantly insulted themselves and couldn't see their own beauty. I had always thought this girl was gorgeous and it made me sad that she couldn't realise that. I mean it wasn't even a mirror — it was a door!

Now Elman works as a body confidence coach, and her friends tease her that she's so confident that it seems impossible that she would be able to relate to people who need help loving themselves. Wrote Elman to Bustle, "One of my friends who I had known for five years laughed and told me I couldn't teach people about confidence, as I don't know what it's like to lack confidence — little does he know what I used to be like!"

As a part of her coaching, Elman found that she was frequently discussing her scars, but never showing them off. Her campaign, #scarrednotscared, is meant to celebrate the beauty she felt she should have been recognizing for years in her body. That, she says, was the impetus for the Instagram image she posted.

The feedback on the post, as well as on her Facebook and Twitter pages, has been overwhelmingly positive in general. Even when it's not, however, Elman knows how to shut down her haters with poise and wit. After she published an essay on Metro, she told Bustle:

One person ... commented calling me the Michelin Man's wife, and ironically, Michelin Man used to be my nickname, because of how similar my name sounds. ... I responded, saying that I would honoured to be his wife, he seems like a nice guy, and thanked him for reading my article. He then responded, saying that he was impressed by my response, and he was glad his daft comment hadn't affected me and that I was above it, "the way it should be."

Elman is one of several amazing, body-positive women who have been shaking up the Internet with important messages about body love. Check out these five other incredible women and get inspired:

Pretscherer posted a before-and-after picture of herself in workout clothes, following a workout regimen that had safely allowed her to get very much in shape. Of course, because the Internet is horrible, people proceeded to criticize her for being too fit and thin. Rather than sit quietly and let the trolls win, Pretscherer posted the same before-and-after shot with a third image, showing off her loose skin under the top of her high-waisted yoga pants, apologetically ending the caption on her picture with, "Go me!" I could not agree more.

Because of her Parkes-Weber syndrome, one of Candian teen Isa-Bella Leclair's legs is slightly swollen, but that didn't stop her from posting a ragingly body-positive bikini picture with the caption: "I won't let anyone dim my sunshine because they are blinded. I'll tell them to put on sunglasses because I was born this way."

Enneking, the amazing plus-sized blogger behind Fat Girl Flow, posted a slow-motion video of her jumping into a pool. She's always a role model for body love at any size, and this video shows women that you never have to be sorry or shy about enjoying the sunshine and showing off your bod.

The former American Idol hopeful posted an awesome body-positive Facebook photo rocking stretch marks, and showing everyone that #mombods are just as sexy as #dadbods.

After she was ridiculed for wearing a bikini that showed off her stretch marks, Jex-Blake posted a photo showing them off in all their glory, with the message, "I’m NOT sorry that my body has housed, grown, protected, birthed and nurtured FIVE fabulous, healthy, intelligent and wonderful human beings."