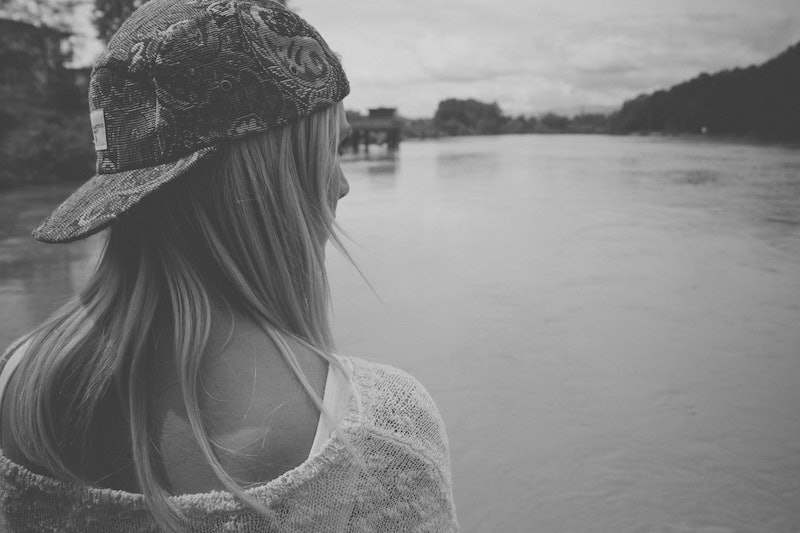 Women have been taught to be paranoid pretty much ever since a little story caught on alleging that we somehow ruined paradise for everyone by eating an apple. Ever since then, the patriarchy has pretty much been obsessed with telling us we had to protect ourselves, whether it be from the world, other men, or even out own sexuality. Unfortunately, most women have been raised to be more paranoid than men, to believe that we are always at risk for something.

Sometimes, of course, our paranoid thoughts are justified. Women face street harassment, violence, and all kinds of other awful BS we have to worry about on an all-to-regular basis. But other paranoid thoughts are pretty much unfounded. Unnecessary worries — about how our bodies look, our performance during sex, and even our underwear — abound. Most of the stuff on this list are things we really don't need to worry about, or that we at least shouldn't have to worry about. Of course, not every woman has had these thoughts or has the same experiences, but I do think there is some universal paranoia many of us can relate to.

So the next time you pull on that pair of white pants in the suspicious hopes that it will make your late period come, think of me. (Or, actually, maybe don't. That would be a little weird.)

This is one that almost all of us worry about — and the one we really need to do away with, yesterday.

This one is legit, unfortunately. Our rape culture has instilled in most women a fear that they are prey to men on the street. And unfortunately, that fear gets reinforced every time we're made to feel like walking meat by street harassers.

3. "I'm Wearing My Cute Underwear/White Pants — So I'll Get My Period Today."

I've totally worn some lacy underwear under the superstitious belief that it would somehow prompt a late period to come. I mean, it always seems to ruin our best underwear at the most inopportune times, so this one might be legit.

Here's another one we really need to get over. Ladies: we taste good. Seriously, if a partner makes you feel like you don't, seriously question the relationship. Unless you have some sort of infection (which would give you other symptoms) someone who's attracted to women is going to like your taste.

I say "he" because I've never heard my lesbian friends worry about this one — only my straight female friends. It's related to worrying about taking too long, and once again, only gets in the way of actually enjoying yourself. I still know I struggle with this one, but I've found the best way to get rid of this paranoid thought is to establish with my partner that he will always stop if he gets tired. That way, I know that as long as he's down there, it's what he wants to be doing.

Because that's the way life works.

Sure, I look really hot in these jeans, but what if it's just those weird skinny dressing room mirrors and the flattering lighting and this incessant techno?

8. "If You Pluck One Hair, Do Three Really Come To Its Funeral?"

Nope, yet another myth perpetuated by Sex and the City.

This is one paranoid thought that we shouldn't let stop us from doing self-exams.

10."What If My Coworkers Can Tell By My Shoes That I'm The One Pooping?"

They aren't looking. Please, for the love of Gloria Steinem, poop at work.

It's the new oven.

Damn it, just because I was laughing?

The struggle is real, ya'll.

14. "What If I Offer A Seat To A Pregnant Lady Who Isn't Actually Pregnant And She Gets Mad?"

There's a level of emotional conscientiousness and paranoia here that only women can usually pull of.

15. "If I Just Order A Salad Will My Friend Think I'm On A Diet Or Have An Eating Disorder?"

Sometimes you just want the salad. It's OK.

16. "What If Everyone Secretly Hates Me/Is Mad At Me/Thinks I'm A Bitch?"

Unfortunately, this seems to be a predominately female worry. Chances are no one thinks any of those things. Take a page from Hillary and you do you.

17. "What If I Leave The Bathroom With My Skirt Tucked Into My Underwear?"

One poor coworker told me that this actually happened to her — in front of her boyfriend's dad no less.

If you've had this paranoid thought, especially if it's based on nothing, know you're not alone. I know I was convinced for years that I wouldn't be able to get pregnant because I had irregular periods, even though I'd never actually tried. As Elli Thompson Purtell wrote in her awesome essay for Bustle on the topic,

I expected my friend to be surprised, to ask why, to tell me not to worry because it would work out. Instead, she rolled her eyes and said, “Elli, everyone thinks she can’t get pregnant.”

20. "What If I Forgot To Take The Pill/The Condom Had A Hole/The IUD Just Doesn't Work On Me?"

Someone has to be that one percent failure rate, right?

There is some science to back this one up, it turns out.

Pretty sure men don't worry about this one as much.

23. "What If My Boobs Get Uneven/Saggy/Bigger/Smaller?"

They might change, but the good news is, they'll always be boobs.

24. "What If I Seem Needy For Asking Him/Her [Insert Totally Reasonable Thing Here]?"

Let's get over the fear of seeming needy just because we have feelings. It's not to say it's not a real way you can be, but chances are, you're just being human.

25. "What If I Find My Prince/Princess Charming And I'm Still Not Happy?"

Turns out, nothing is as simple as Disney made it out to be. Shocking, I know.

More like this
Help! My Partner Only Wants Sex Late At Night & Won’t Compromise
By Sophia Benoit
Ask A Sex Therapist: Is My Sex Fantasy Normal?
By Madison Malone Kircher
What Mercury Retrograde Spring 2022 Means For Your Sign's Sex Life
By Nina Kahn
Are Gemini & Scorpio Compatible In A Relationship?
By Kristine Fellizar
Get Even More From Bustle — Sign Up For The Newsletter