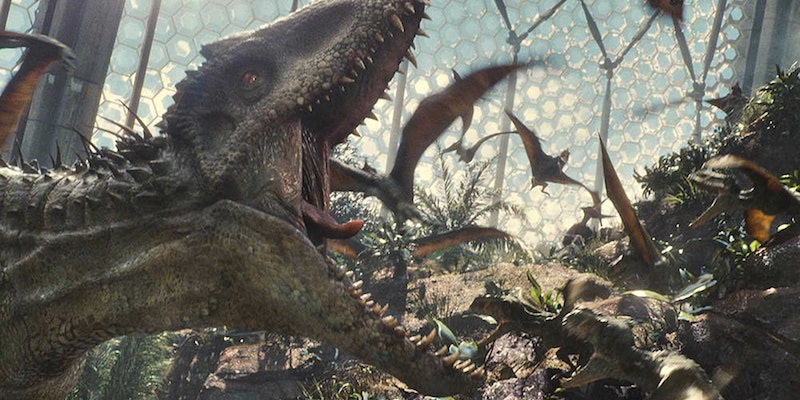 You don't release the third-highest-grossing movie in cinema history and NOT make a sequel. That's just not a thing that happens, so it shouldn't have come as a surprise to anyone when Universal Pictures announced this Thursday that they had set a date for their inevitable Jurassic World sequel.

While the latest entry in the Jurassic Park franchise, starring Chris Pratt and Bryce Dallas Howard (who are, thankfully, returning for the sequel), received fairly good reviews, it didn't come close to the rapturous critical reception of other summer films like Mad Max: Fury Road or Inside Out. And yet it proved itself to be critic proof, defying every expectation and debuting to the biggest opening weekend of all time. It has now grossed more money than any movie ever other than Titanic and Avatar.

It's actually surprising that it took Universal this long to officially announce the sequel, given World's monster-sized success. And while all the studio really needs to do to ensure they get just as many butts in seats next time is to crank out a film that features Pratt going mano-a-mano with some man-eating dinos, I have some suggestions if they want to make the sequel (Jurassic Planet? Jurassic Universe? Jurassic SPACE??) even better than the last one:

Any Jurassic fans who were hoping for appearances by the franchise's original stars — Sam Neill, Laura Dern, and Jeff Goldblum — were sadly disappointed upon World's release. The only returning characters from the first three films were Dr. Henry Wu (B.D. Wong) and the animated Mr. DNA. As director Colin Trevorrow said, he didn't want to "shoehorn" in those original characters "for [his] own sentimental reasons." But now that the world and characters of the new entry have been established, maybe it's time for some familiar faces to pop up.

Seriously, I hope Claire Dearing packs a pair of sensible combat boots next time around. No single issue was more annoying this summer — or more ceaseless — than the debate that swirled around Claire's choice of footwear. While I personally took much less umbrage with her simple beige pumps than most moviegoers appeared to (she still managed to save the day, after all), even I hope she ditches them in the sequel, if only so we can all stop talking about them.

Part of the thrill of the original Jurassic Park was watching these mythical creatures come alive for the very first time. No entry in the franchise since has been able to recapture the sheer scope of that awe, since we've already seen the dinos before. Sure, each movie will introduce one or two more species — but not enough, in my honest opinion. Besides the fictional Indominus Rex, the only new dinos that World inducted into the franchise were the dimorphodon (the funny-looking flying guys that attacked with the pteranodons) and the mosasaurus — and neither of those are even technically dinosaurs! (The former is a pterosaur and the latter is a mosasaur.)

I get it — the Jurassic Park movies are family films. Adults who grew up on the franchise may delight in the more thrilling aspects of the movies, but they still need to be accessible enough for young kids. Hence why all four movies so far have at least one child in a central role. But, while World's Zach and Gray weren't nearly as bad The Lost World's Kelly or Jurassic Park III's Eric, their scenes were far from the best in the film, and it would be refreshing to see an entry that shied away from the cliché kids-in-peril trope for once.

Just like how J.J. Abrams' upcoming Star Wars film promises to employ more practical effects (like puppets and models) than George Lucas's CGI-heavy prequels, the next Jurassic movie should return to the animatronic roots that made the first film's dinos so lifelike. To be fair, I was actually very impressed with the quality of the computer animation in Jurassic World — there were times that I forgot the dinosaurs weren't animated! — but there's no denying that something tangible will always be more realistic than something generated inside a computer. The fact that the single practical effect in the entire film was the dying apatosaur is a pity, and the sequel should step up the game.

Obviously things had to go wrong in Jurassic World in order for there to be a movie at all. But whereas in the original film the park malfunctioned because of deliberate sabotage, in this sequel, things seemed to fall apart because of human stupidity. Why send in people to examine the Indominus's cage when it doesn't show up on thermal scans without checking its tracking implant first? How are children allowed to drive gyrospheres that don't operate on any sort of track and are unable to be automatically recalled in the case of an emergency? And who on earth thinks it's actually a good idea to train velociraptors to be super soldiers? Yeesh.

There's no such thing as too much Chris Pratt.

Jurassic World 2 will hit theathers in 2018.

More like this
The 'Hocus Pocus' Sequel Finally Has A Release Date & It Makes Total Sense
By Shannon Barbour and Radhika Menon
9 Honestly Unbelievable Revelations From The WAGatha Christie Trial
By Frances Stewart
Everything To Know About Marvel’s 'Thor: Love And Thunder'
By Grace Wehniainen
What Does Doctor Strange’s Third Eye Mean?
By Arya Roshanian
Get Even More From Bustle — Sign Up For The Newsletter