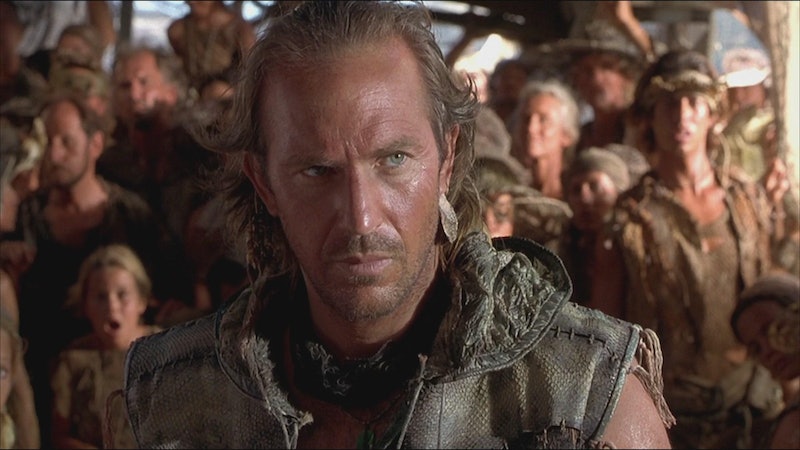 There are good movies, bad movies, and movies that are so bad they're good. You know the type of movie you watch alone on a Sunday night just because it's on and you think, "I just can't be bothered to change the channel." Or the kind of movie that you once thought was amazing in your youth is now seen for the awful cheese-fest that it is ( Titanic , I'm looking at you). But then there are those movies that are so inexplicably bad that you wonder how they ever got made. So bad in fact, that they're great. Waterworld, which is celebrating its 20th anniversary, is one of those movies. The plot of the film is this: 200 years in the future, all of the ice caps have melted and the earth is one giant ocean (Which, according to science, will likely happen in two billion years or so). The remaining people of earth live on boats and floating metal islands. Kevin Costner stars as the Mariner, a renegade who lives on the aquatic fringes of society... and who has developed gills and webbed feet for living underwater.

But wait... THERE'S MORE! Mankind is under threat when Dennis Hopper and his gang The Smokers arrive and threaten the good people of a dystopian fortress. By the way, Kevin Costner was captured in the fortress and was locked in a cage, but then they let him out to fight Dennis Hopper. I really, really wish I could have sat in the pitch meeting for Waterworld. Oh, to be a fly on the wall.

What made Waterworld such an epic flop was that the hype building up to it was HUGE. It was being promoted as if it were going to be the biggest blockbuster in cinematic history... and quite frankly, it needed to be. The film's budget was massive due to its special effects and shooting requirements. At the time, it was the most expensive movie ever made. It cost $175 million to make and only grossed $88 million in the U.S. International sales helped the film, but its overall critical response was pretty abysmal.

If you're in the mood for an over-the-top and very insanely acted sci-fi film, then by all means, indulge in Waterworld. But I must warn you, in the past two decades, it had just become another adjective for "bad movie." It was so bad that people are STILL tweeting jokes about how bad it is. Take a look:

In my estimation, It's the best worst movie ever made.