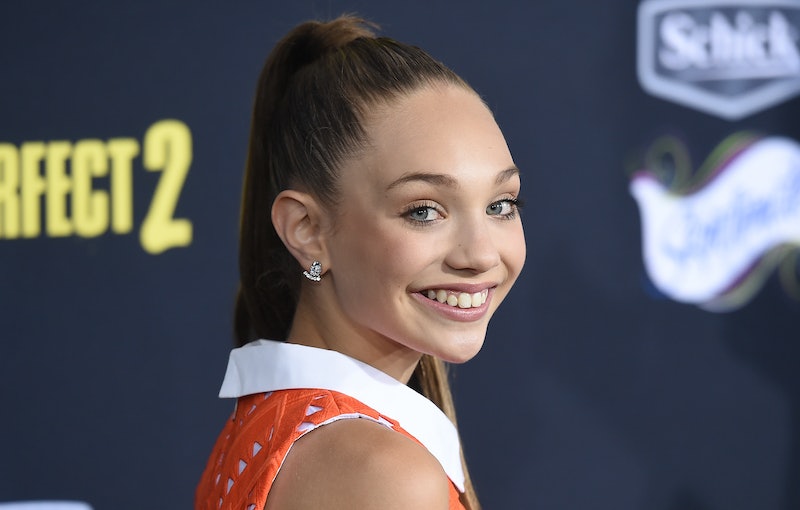 Maddie Ziegler was Dance Mom's breakout star, but she would have found a way to take over the world with or without the show. The 12-year-old dancer has such broad appeal that she has done everything from reinventing herself in Sia's image for the singer's "Chandelier," "Big Girls Cry," and "Elastic Heart" videos, to snagging a guest role on Pretty Little Liars, to fronting Betsey Johnson's x Capezio campaign. There's even speculation that Ziegler might get her own show, which would be a no-brainer considering her popularity and the fact that she told MTV Australia she wasn't sure if she'd be returning to Dance Moms for a sixth season. Considering some of the TV shows Maddie Ziegler has professed her love for in interviews, it's easy to predict the kind of starring role she'll eventually land (because this is totally going to happen, you know).

The little dancer has revealed in interviews that she definitely wants to continue acting and that her ideal situation would be to appear in more shows like PLL. Like all good actors, she has been doing her homework and the tween admits that she is a big fan of several TV shows, many of which appear on the Disney Channel or Nickelodeon. If I were a casting agent, I would scoop her up immediately and beg writers to create roles for her in each of her favorite shows because everything Ziegler touches automatically turns to gold.

Here are some of Ziegler's favorites.

Ziegler was the "Creepy Dancer" of every PLL fan's worst nightmare (and Spencer's actual nightmare) when she appeared in an opening scene dancing in a creepy room that was supposed to be Charles' dollhouse. Executive Producer Oliver Goldstick told Entertainment Weekly Ziegler was such a huge fan of Pretty Little Liars that her agency called him to ask if there was any way they could work her into the show. In an interview with UK Telegraph, Ziegler said she considers PLL must-see TV and that it's her favorite program. “I get so scared but I have to watch it,” Ziegler said.

Ziegler revealed to Elle that she wasn't quite sure who Shia LaBeouf was when she found out she was going to shoot Sia's music video for "Elastic Heart" with him, until her mom revealed he was the actor in the actor in Even Stevens . "I've watched it a couple times. It's not like — I think it came out a little bit before all the shows that I watch," Ziegler said. "But I definitely, you know, was familiar with it."

The Dance Moms alum appeared on DWTS twice. Last year, she and Sia performed "Chandelier" with pro-dancer Allison Holker, and the tween returned to the set in spring on America's Choice and Trios Results Night to interpret Josh Groban's "Over the Rainbow." It seems fitting since she's a bit like Julianna Hough's mini me.

Ziegler was bitten by the acting bug after appearing in a guest role on Disney's Austin and Ally as Shelby. Her adorable shout-out on Twitter proved she was excited to be joining a network of which she was already a super fan:

She counts Disney's Shake It Up as one of her favorite TV shows, which makes total sense since it revolved around the lives of two young girls (played by Bella Thorne and Zendaya) who want to become professional dancers. In an interview with Us Weekly in which Ziegler revealed which books were on her 2015 summer reading list, she mentioned Autumn Falls by Thorne and then gushed about her love for the actress/dancer: "I'm a Bella Thorne fan and it's kind of about her life."

Yet another show about a young girl in pursuit of stardom, Disney's Jessie is about a teen (played by Debby Ryan, who has shared her love for Ziegler on Twitter) who moves to New York City and becomes a nanny for an eccentric family while she auditions and attempts to make it as an actress. Ziegler loves Jessie and, considering how the show has just been cancelled but will return as a spin-off called BUNK'D , I can picture Ziegler sliding in and joining the cast.

Ziegler isn't the only star in her family; little sister Mackenzie, 11, is making moves as a triple threat. She's a dancer, a singer with an album out called Mack Z , and an aspiring actress who had a guest role on Nickelodeon's Nicky, Ricky, Dicky & Dawn. Ziegler told Yahoo! Style she and her little sis compete against one another, but at the end of the day, she is supportive of her success and proud of her. How adorbs is Mackenzie?

Anyone want to join me in creating a dedicated Ziegler network? These two are going to be huge.

More like this
Everything To Know About A Million Little Things' Reported Final Season
By Brad Witter
What’s New On Netflix: A Victoria Justice Rom-Com & The Return Of David Letterman
By Arya Roshanian
What’s New On Netflix: The Return Of 'Bling Empire' & A Rebel Wilson Comedy
By Arya Roshanian
Becca Tilley Confirmed Her & Hayley Kiyoko’s 4-Year Romance With A Heartfelt Note
By Brad Witter
Get Even More From Bustle — Sign Up For The Newsletter